The activity surrounding the TOTER 2 Sailboat design continues. From day one I realized that a sailboat without a keel of some sort is just a disaster waiting to happen. As a result, I had an option defined that would allow the small portable boat to become a qualified sailboat without a keel, and that was to add sponsons to the center module hull. The plans always included this as an option, but after a few excursions in windy (I mean WINDY) conditions, it was apparent that they should not be an option, but rather part of the normal build. 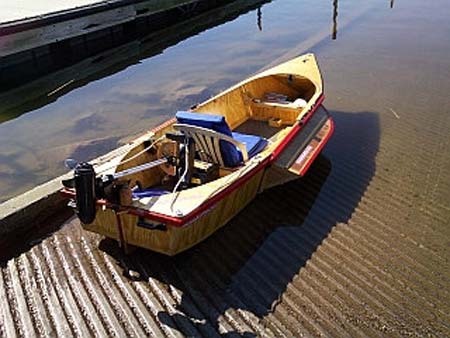 After constructing the sponsons and testing them on the motorized Toter 2, I can attest to their ability to impart great lateral stability to an already steady boat. It is now possible to stand upright in the boat without any fear, a feature fishermen will appreciate. I have tried to tip the boat by leaning way over the side, but the sponson would just not go under, as they add nearly 2 feet to the beam at mid section. So, to put it simply, I am suggesting that those who want this kind of stability should also construct the sponsons. They are an easy on, easy off addition, and require only a little more storage space when transporting, and cost very little to build. The 8 page pdf plans are available to download FREE. ( Click HERE)

The true test, of course, will be under full sail, in heavy winds. I expect the results to be quite positive, but I have already had inquiries of where the keel (or daggerboard) is located. It seems the traditionalists are amused, but not convinced. Actually, in non-sponson sailing the little boat performed quite well, but was quite sensitive to gusts. Sailing to windward is another question, and this could be an issue. However, this is not a rounded hull design, and the sharp chine, when listing, does impart a degree of directional stability, in place of a keel like structure. The rest is left to the rudder, to control both direction and drift.

So, in conclusion, it must be stated that the Toter 2 Sail version has always been intended as a fair weather day sailer, not for competitive use, and as such some common sense must be exercised in its everyday use.

A short video provides some insight to the assembly and use of the sponsons.

The enclosed pictures are also intended to help visualize the function and simplicity of the sponson design. 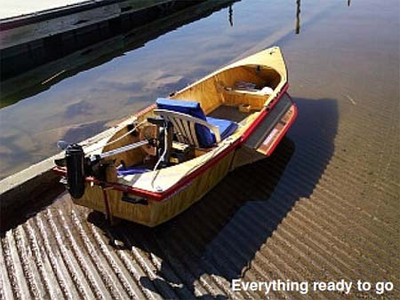