Toto has been my most successful design. Initially she was an experiment to test a new bow shape - a deep V bow that blends into a multichine well aft. There's a twist in the bow bilge panels and at the time I didn't know how to expand those panels on the drawing board. So I built her without them and then sized them by cut and fit. Then I recorded the shapes on the prints. Nowadays this sort of twisted paned expansion is routine on a computer to great accuracy (provided the input is accurate).

The boat is an easy prefab job from two sheets of 5MM lauan underlayment, still very cheap at maybe $12 a sheet from the lumberyard until the rain forests are gone. Marc Smith came to the 1994 Midwest Messabout with two of these Totos strapped to the roof of his Birdwatcher. They were built by two twelve year old girls under Marc's guidance. Marc said the girls did all the work including using the power tools. And they paddled around the Messabout in them.

It's fun to compare Toto with the typical minimal dink because they usually come from the same pile of stuff and labor. Toto covered the 6000 foot long dam at Carlyle lake in 14 minutes with a moderate paddling effort for 4-1/2 mph. She's more seaworthy but she's wetter when pressed because of paddle splash. She has a buoyancy/storage chamber aft. It will keep your shoes and stuff dry while you splash around and I believe it has about 180 pounds of buoyancy volume if the hatch cover stays watertight. (But you can't "self rescue" in any boat like this without very special training. It's best to stay within a short swim or wade to shallow water.) The open cockpit is large enough to allow sleeeping inside, as I have done many times. She's shaped for easy cartopping. In good conditions she'll paddle two adults. The long lean bow seems to ignore an overload, unlike plumb bows which can become cranky when immersed. She'll take you through some very rough stuff if you are solo. But the dinks have their place too. They can have sailing stability and many will find their elevated seating more comfortable. By the way, a boat like Piragua with a simple wide flat bottom won't be as fast or as seaworthy as Toto, but you might be able to stand up in Piragua. Don't expect to do that in a boat like Toto.

I've rounded up some more Toto photos. Here are three by John Mulligan on Long Island. These three and Raidna's look to me to be build per blueprint. (I'd sit a little farther forward myself.) 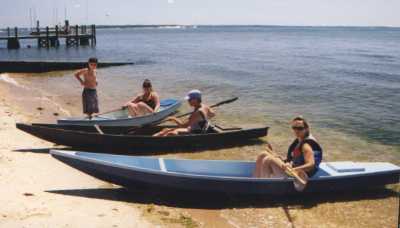 Dale Dagger rides a wave in Nicaragua in his Toto.

Here is Bob Hoffert's Toto in Ohio, maybe the first boat after mine. Looks like he has added a fore deck and put a big access hole in the aft bulkhead. (Remember that the aft storage box is also supposed to be an emergency buoyancy air box to help save your butt in a capsize.) 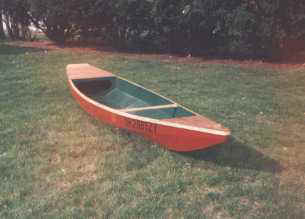 Here is John Ellwood's Toto in Massachusetts. Crowned fore and aft decks and another access hole in the aft bulkhead, although this one appears to have a cover. 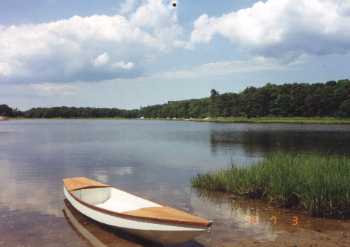 Here is Garth Battista of Breakaway Books with a small foredeck and some good company: 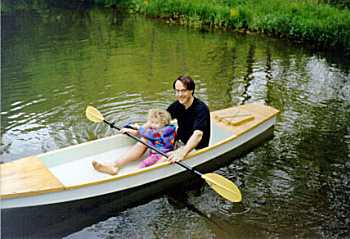 Here is Don Duquet with good company getting ready to watch a space shuttle launch: 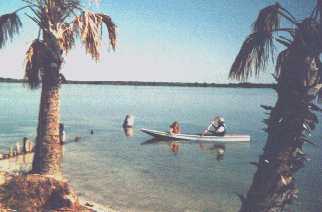 Here is Bob Cole's delux Toto, totally decked with watertight storage in both ends way up in northern Canada: 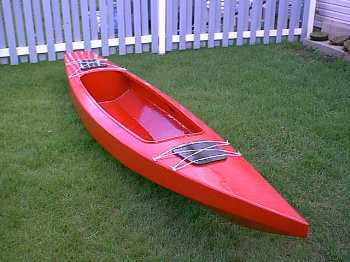 And the fanciest Toto ever by Dean Souza in Washington, with watertight storage fore and aft, fancy coamings, cleats and line chocks, even the national flag flying on the stern! 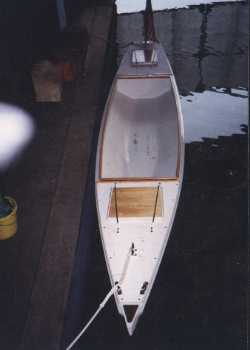 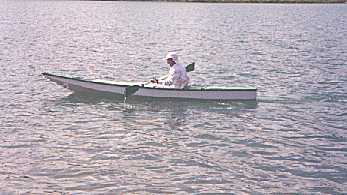 And Al Fittipaldi (New Jersey) made this Toto and got a picture of it in Woodenboat magazine! 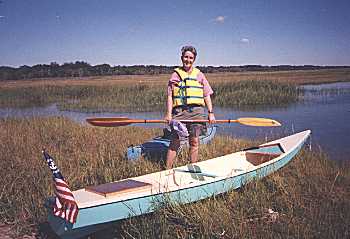 And Bill Turnbull's Toto on the Florida gulf coast: 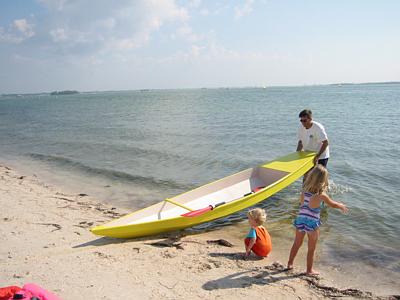 And Stephen Dandridge's Toto delux out in California: 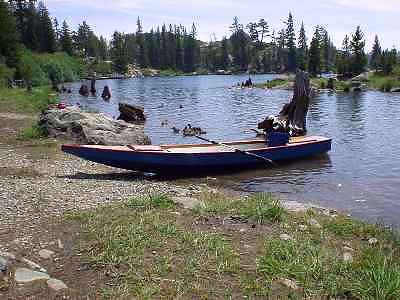 And we think this is Terry Lesh's Toto delux (seen at a boat show out West): 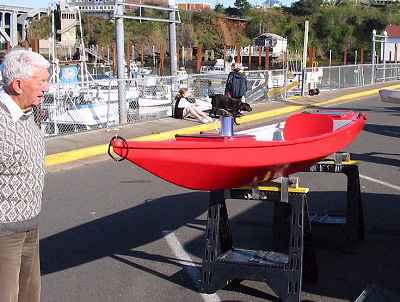 And here is one by Don O'Hearn of St. Louis, photo from the 2002 Rend Lake Messabout: 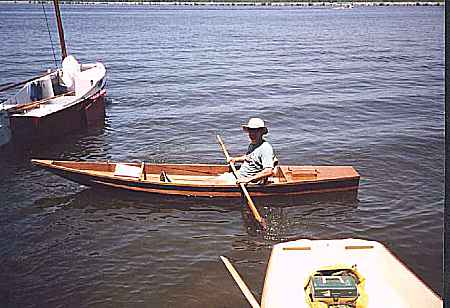 And Al Straub's Toto in Michigan: 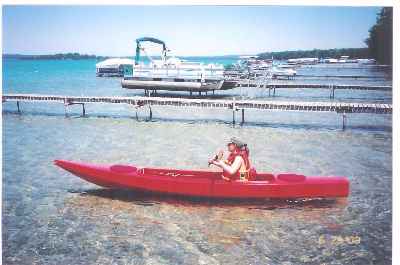 and finally, the photo below is from Tom Raidna.

Plans come with complete instructions including the details of taped seam construction and a drawing of a simple paddle that works. (Marc Smith's girls used double paddles made from old vaulting poles with plywood blades bolted on. I tried their boats and paddles and they were quite good.) No jigs or lofting required. 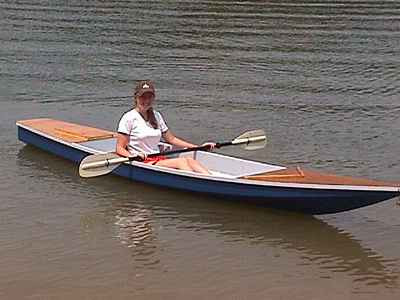