The concept of Sweetie's Pea is quite simple: it is my version of an existing design. I understand that the good folks of the bayous around Louisiana (say, "Loooooooo-zee-an-na") and East Texas would tack little boats like this together - no plans or go-bys, just saw Beauregard poling one along one day last week and thought that there is what I need. Maybe three boards, a handful of nails, and a day's activity, and we were no longer land-bound. 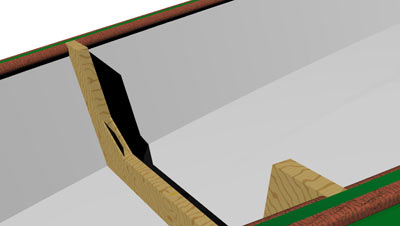 Well, a couple of years ago a friend discovered that some clever soul had applied plywood building techniques to the Pirogue (say, "Pea-row"). The clever soul in question had offered his design on the internet, and was even selling kits. Since both my friend and I are members of a local boat builders/messers "collective", we would have none of this kit thing. As a result, in conjunction with our local Power Squadron, we chose to offer a "Family Boatbuilding Class." On a series of weekends beginning one brisk February Saturday, six families assembled and finished the parts that our group had more-or-less precut. It was a great time! But... those of us that were there to help didn't get to put our own boat together. The model really started to grow on my bride, who apparently began to have visions of staggering upper body strength and delicate feminine curves. (She thought it might be of benefit to her, too!) I came home and laid down the initial lines.

Several months later, I revisited those initial lines. My reasoning was a simple design challenge; "how can we make a dandy double paddle canoe from only two sheets of plywood?" In fact, it takes a tad more than that, but not much; some 1x3's for framing, some ordinary half-round for trim. Oh yeah - don't leave out the glue! Still, no lofty, detailed design brief, no lengthy client consultations, just seeing if I could make a version that had some of the wrinkles that I had noticed in the earlier construction ironed out. At the same time, this design offers a few "upgrades" intended to satiate the inveterate woodworker: breasthooks, inwales, and gussets mortised into the frames (which are shown to actual angle, unlike my inspiration...) 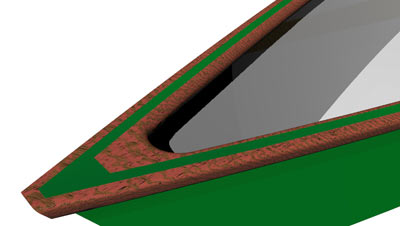 Needless to say, what we have here is a pretty rugged version of a vessel that was never intended to be particularly rugged. We also have a vessel intended for very small rivers and lakes - the question of seaworthiness doesn't even enter in. NEVER stand up in her - don't even kneel. Keep your weight as low as possible in her, and she'll be stable enough. She is designed to be cheap and quick to put together; to give you, the builder, the satisfaction of building your own boat (please, if you can, get your entire family involved in building this boat, and perhaps a small fleet of sisterships!)

Plans include 2 sheets and an illustrated and detailed building manual.