Heather is a compact double-ended center cockpit pilot house motorsailer. Her styling was inspired by Scottish fishing trawlers and her trim work by US West Coast trollers. Her construction is mostly of wood, in combination with modern adhesives and a thick fiberglass hull sheathing. She is designed to sit upright on the beach if needed, on twin foil-shaped lead ballast keels and a skeg which also protects the rudder. Her tall Marconi knockabout rig is designed for simplicity and upwind performance and makes ample use of hardware and materials that were available in 1975. Her powerplant was a 7HP air-cooled Briggs and Stratton single cylinder gas engine (as used in a Rototiller), marinized with a feathering and reversing two blade controllable pitch propeller by WaterMota of Devon, England.

I started designing Heather in 1973, following a 2 ½ year stint in Peace Corps in Guayaquil, Ecuador where I taught Naval Architecture. At first I was sketching a long, skinny, canoe-like ketch, then a long and skinny sloop. As I got more serious about building a boat for myself, I became more practical (time, cost) and wondered how “small” I could make a boat that had everything I wanted. Then meeting that challenge in a creative and tasteful manner using engineering principles became the goal of my design. I built a 2D mannequin of my joint-to-joint body dimensions, to 1” scale, and used it to size the seats and bunks and visualize the interior of the design. I sketched and re-sketched the boat to scale for two years until the sketches stopped changing. In the time that elapsed, I moved from San Pedro to a houseboat on Lake Union in Seattle and my requirements evolved to include an enclosed pilot house, modeled after the halibut schooners and salmon trollers that I saw every morning cycling through Fisherman’s Terminal on my way to Marco, where I worked as a Naval Architect. 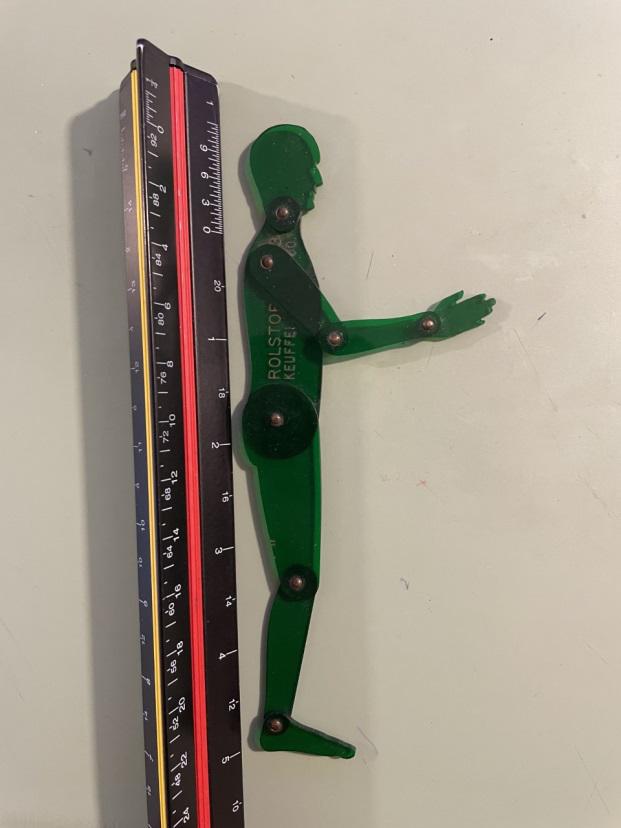 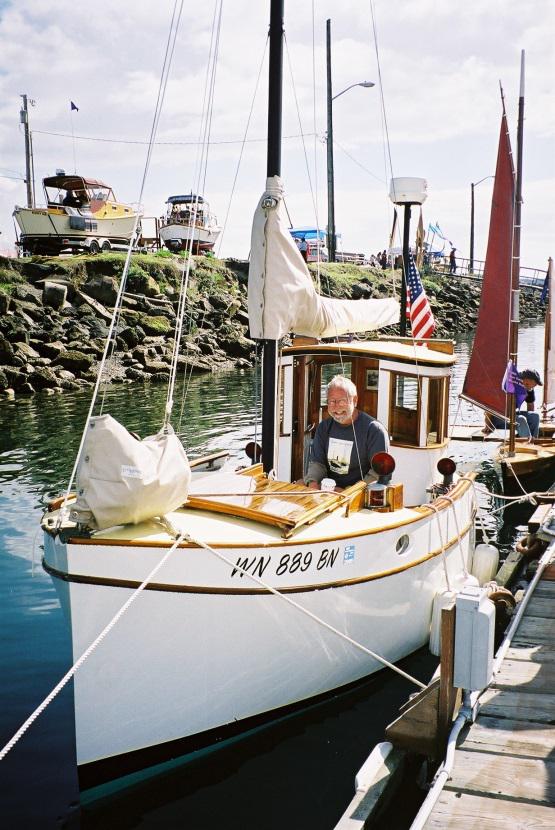 I chose to design a double ended hull because I like the way it looks and the way it parts the water in a following sea. The nearly vertical stern maximizes the waterline length (more “hull speed”) and keeps wetted surface low (less viscous drag). It also leaves a clean and orderly wake. The absence of reserve buoyancy in the stern dictates that the variable weights (crew and guests in the case of a tiny sailboat) be kept amidships (center cockpit) where they will not affect trim. 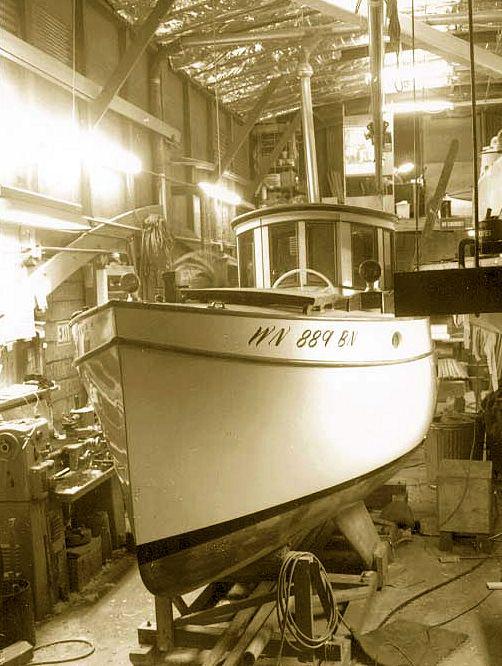 The center cockpit divides the boat into two separate cabins, the focsle and the pilot house (like a halibut schooner). By placing the crew and guests in the center at the widest point, there is more room to sit and more room to hike out when required. Both cabins are entered from the center cockpit by dropping down from above, thereby eliminating the need for a passageway for fore and aft access within the cabin. A berth/crawlspace joins the spaces on the starboard side. The result is a uniquely cozy and comfortable layout that affords privacy and a surprising amount of room, including standing headroom in the pilot house. 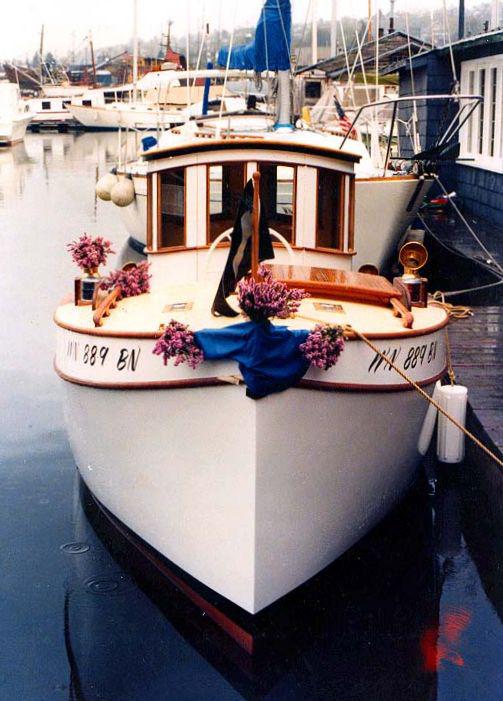 The pilot house is accessed through a forward-facing door that has inside and outside steering wheels mounted on a common shaft passing through the door. This feature was essential to making the layout work, and allows for inside and outside steering, as well as steering with the door in the open position. This turned out to be my favorite door position for sailing, because I could see the whole boat in front of me and with all the sheets, traveler controls, barber haulers, vang, downhaul and halyards led to the cockpit I could tack and tweak the sails without leaving the pilot house. 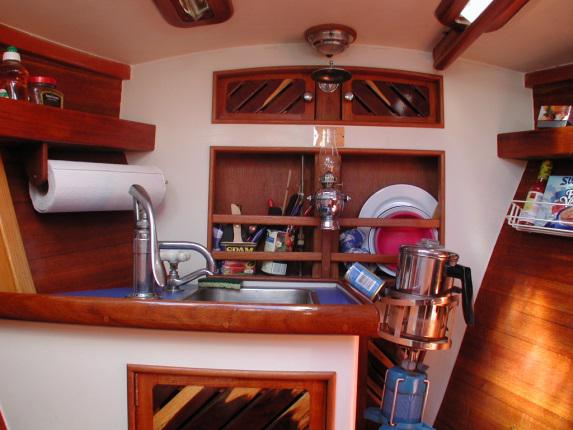 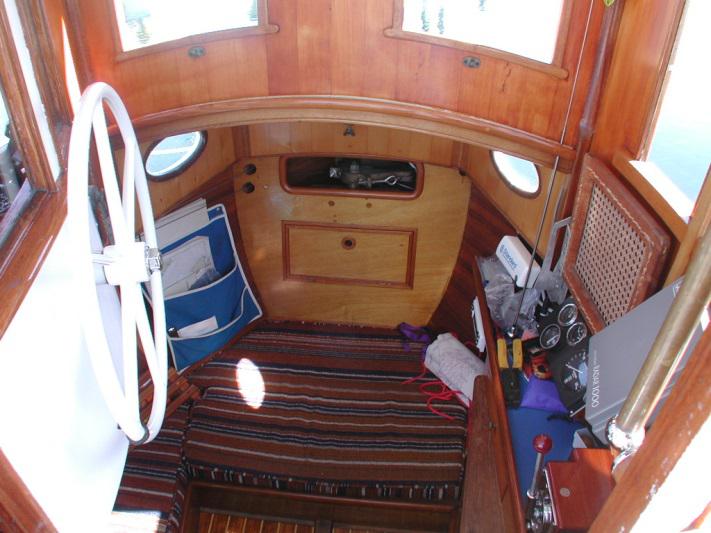 The ballast is divided between two foil-shaped cast lead keels of 430 pounds each. They produce a ballast ratio of just under 30%, which is adequate because much of the crew weight (say 4 people x 185 = 740 lbs) is movable. It also theoretically allows the boat to remain afloat if swamped, due to the buoyancy of the wood structure (don’t try this at home). In practice, Heather behaves like a keelboat, carrying her tall rig comfortably, and recovering handily from a knockdown without shipping water. Because of her high freeboard compared to waterline length, Heather is very dry and seakindly. I never got water in the cockpit in the years I owned her. 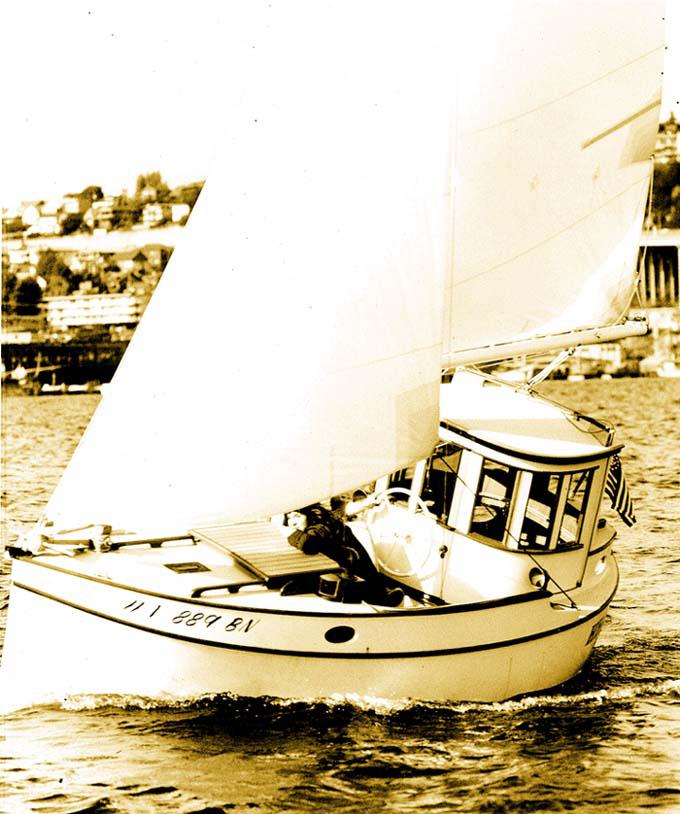 I went with a tall Marconi rig because I wanted good upwind performance. My logic at the time was that it is easy to get a sailboat to go downwind, but to go upwind, a rig needs to be balanced, clean, and efficient, especially for a heavy and high-sided 16 footer with a pilot house. Thus a 24 foot tapered aluminum mast, fractional sloop rig, no spreaders, no forward lowers, no backstay, internal halyards, and 134 square feet of sail area. It turned out that the boat sails very well; weatherly and responsive, and the ability to flatten the main with a flexible rig is a huge advantage for motorsailing. I routinely picked up a knot while motoring when I flattened the mainsail and sheeted it in because it stopped the rolling and added some thrust. I could consistently make over 4.5 knots motorsailing in light air burning 1/5 gal/hr. 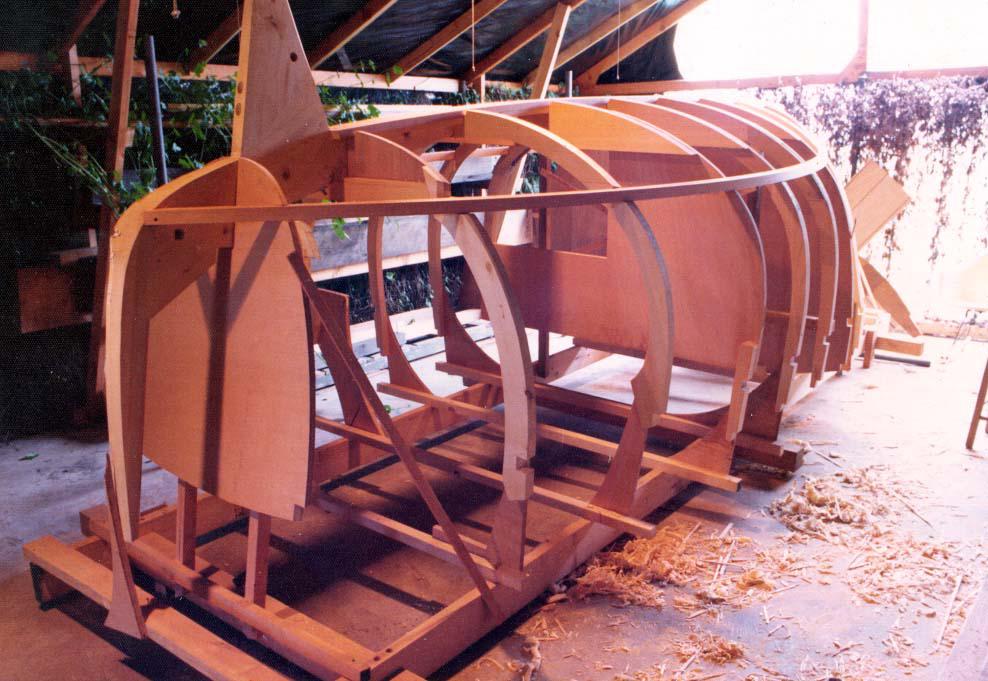 I chose to strip plank the hull because it is a method that lends itself to voluptuous shapes and is not technically difficult. It also suits single-handed building, because the individual strips are light and easy to handle. I used sawn frames and bulkheads to set up the shape (rather than temporary molds) and they remained in the boat and became components of the interior and held the hull in shape when it was time to turn it right side up. I faired and fiberglassed the hull (1.5 oz. mat and a boat cloth totaling around .10” in thickness) before righting the hull, and then faired the planking between frames by hand (a big job) and sealed the planking inside as well as the exterior fiberglass overlay with West System Epoxy. This is an important step because the strip planking swells and shrinks with humidity and will crack and buckle unless it is encapsulated and stabilized with epoxy (I know, because my hull started cracking in the spring and continued to do so until I discovered West System Epoxy, and sealed the hull). The hull has remained stable for 42 years. Epoxy really works. 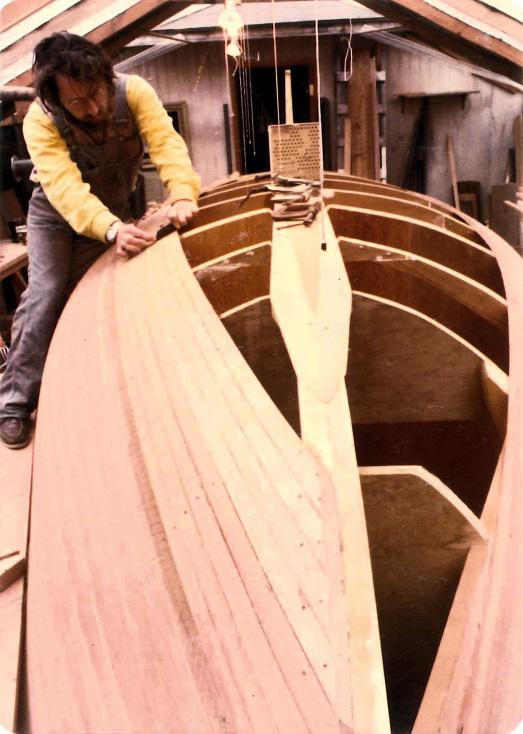 I spent seven years building Heather, and put in roughly 5,000 hours, not particularly focused ones. A build of this type is easily confused with lifestyle, and I enjoyed the journey as much as the destination. I had a stream of visitors who generously shared ideas, wood, hardware, and beer. Those visitors became my community and they taught me what I know about boatbuilding. Over the years, I have had numerous requests for Heather plans from amateur builders, and I mostly told them it would be too hard to build. (I was also busy doing other things and had not finished the construction plan.) In the meantime, I became an old man and started noticing how talented and creative all the young whippersnappers are. I still like this design, the third of my career, and it still looks good to my untrained and impartial eye. My hope is that by making these plans available someone will make another Heather, and a better one at that. 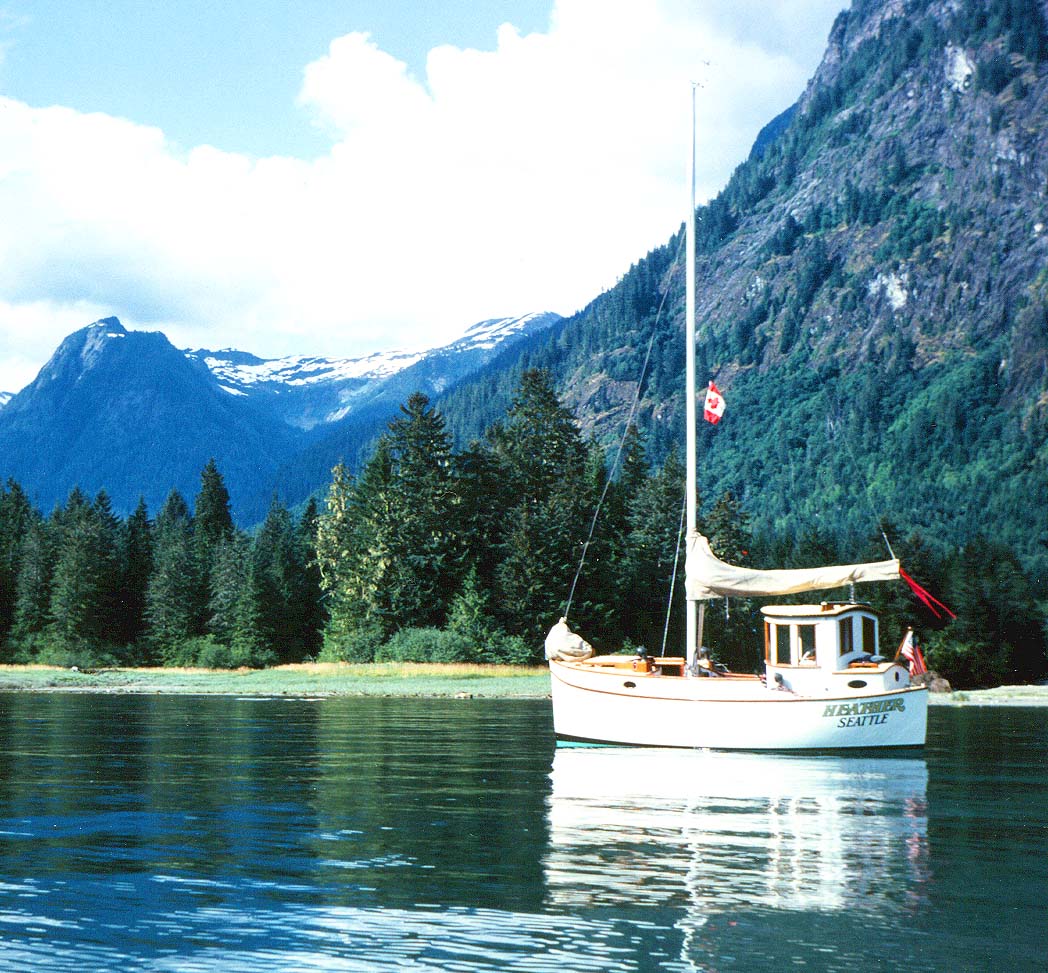 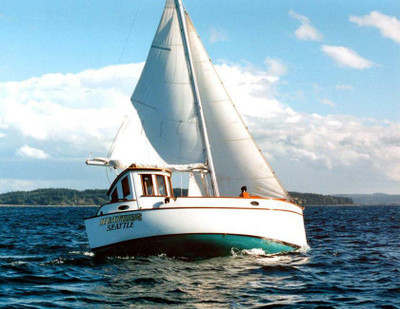