A few years ago my wife asked me to name my favourite boat. If I had thought about the question at all, it would have been almost impossible to answer, because there are so many designs which have appealed to me over the years. But on that occasion I gave her an answer based on gut-reaction, and that answer was, “Hesper”.

Hesper (the evening star) was a Boston pilot schooner designed by the great Dennison J. Lawlor, and built in 1884. She was 102 feet over all, and had a beam of 23 feet, and in the words of the scholar Howard I. Chapelle her, “..speed and weatherliness were phenomenal.”. I’ve always been attracted to the looks of the schooner rig, but what drew me so strongly to Hesper was her hull shape - the extreme fineness of her entry and a sharp, hollow bow. To top it all off, she had a plumb (upright) stem which gives an impression of great power. I guess that when I specified Hesper as being my favourite, I was really just saying that I like the lines of many of the pilot schooners and Gloucester fishing schooners, and Hesper is a prime representative.

I haven’t worked out whether people like boats of a certain shape because of having studied lines on paper and in the flesh, or whether there is something deep within us which is drawn to particular shapes. What I do know is that while we need to learn from others, it is critical for each of us to trust our own sense of proportion and judgment when choosing a design. In other words, don’t think too deeply when making a design choice – follow your instincts.

Relying on instinct became very important to me when I was approached by John Shrapnel in late 2007. John had drawn up a short-list of designs for his next boat, and kindly invited me to put up a competing proposal of my own. It was an intimidating offer, because the other boats on John’s list were well-known designs from established designers. Relatively speaking, my work was an unknown quantity.

John had been spending a lot of time sailing Paul Hernes’ boat – in fact, Paul was having difficulty prying John’s hand off the tiller long enough to have a go himself! That boat was the first to be built to my Phoenix III design, and Paul had put a lot of work into building and testing her. When John gave me the opportunity to submit a competing proposal for his list of designs he said three things: - 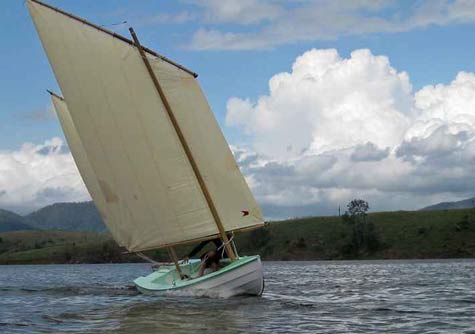 The first two requirements were easy enough to meet, but the last one caused me some concern. John is a speed-demon, and I knew that he wanted to go fast – but I also knew that the Cat-Ketch (or Periauger) rig is not the fastest system for getting a boat up to windward. I began to have visions of Paul’s smiling face as he crossed the line in front of this imaginary big boat. However, I decided to give it a go just to see what eventuated on paper (I have since designed a gaff-headed cat rig and small flying jib – details included with the plans).

Now, when designing a small boat, internal layout is very important to the success of the resulting craft. I guess that is the case in big boats as well, but dinghies have such limited volume to start off with, that every dimension must be carefully considered in relation to the human form. When I started the initial sketching of a cat-ketch rig for the new boat, it became apparent that the location of the masts would allow a particularly good seating arrangement for a cruising dinghy, and more importantly, would make possible a really large dry-stowage/buoyancy compartment. I was beginning to warm to the two-masted rig. 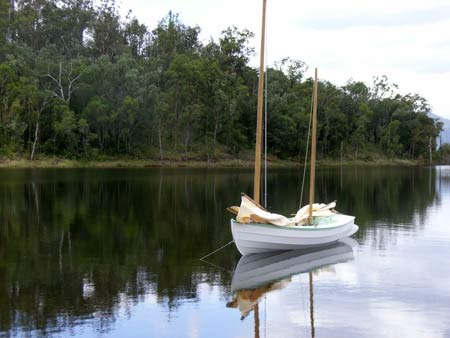 However, I was still concerned about making the boat fast enough for exciting sailing. The influence of Hesper and her sisters is never far below the surface of my pool of thoughts, and in this new design I was able to bring at least some of those visions to life on paper. The principal dimensions I had chosen were 17ft x 5ft

(5.182m x 1.524m) giving a length-to-breadth ratio of 3.4:1 overall and nearly 3.8:1 using waterline measurements. This is fairly lean for a sailing dinghy, and allowed me to draw a bow with hollow waterlines and a fine entry angle. The centre-of-buoyancy was well aft at 58% of the overall length, but that suited my purpose as I knew that people tend to sit too far back in a dinghy.

The numbers and the shape indicated a fast hull for a cruising dinghy, and to ensure there would be enough horsepower, I put 155 sq.ft.(14.5sq.m)of sail into the rig. Both of the sails are balanced lugs, because of that rig’s simplicity, good reefing properties, and short masts. Being spread out along the length of the boat, this rig has a low combined centre-of-area, meaning that for a given sail area, the heeling moment is minimised – a happy situation for this slippery vessel. The resulting numbers are as follows: -

Periwinkle (as the design was now christened) was given the go-ahead by the very brave John, and was built using the glued-lapstrake (clinker) method. In order to keep building hours down, I designed her with only five planks of plywood per side, and included frames and bulkheads in the mold set-up. This saved time and materials when building the mold. Planking was from 9mm marine ply, and the deck was made of 6mm marine ply. Natural timber components like the keel, stem, floor timbers, gunwales and bed logs were made from Hoop Pine, Oregon, Victorian Mountain Ash, and Silver Quandong. All structural gluing was carried out using West System® Brand epoxy products, and metal fastenings were silicon bronze. Coatings came from Norglass in Sydney. 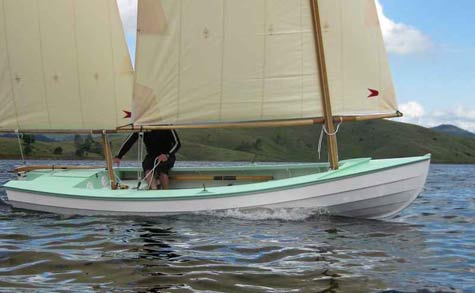 Since launching day in late November 2008, Periwinkle has been sailed frequently by John Shrapnel and many friends. Minor rig tweaking continues, but I’m relieved to say that she has proved to be everything that we hoped. Being light and lean, she benefits from early reefing. In the event of a capsize, the boat sits reliably head-to-wind with the mizzen sheeted in firmly, while a crew member bails from the aft thwart (seat). The big centreline aft-deck hatch remains above the capsized waterline so that the compartment is protected from flooding even if the hatch cover is left off.

Included in the design is a third mast location which allows the boat to be sailed with only a single sail if conditions are tough and the crew light. This mast location has been tested - at various times using the main sail, and at others the mizzen. In either case, the helm balance is good and the boat is easily driven.

I know that in this life I will never set eyes on Hesper, but the images I have of Periwinkle cutting through a chop give me a hint of how she and her sisters must have appeared so many years ago. 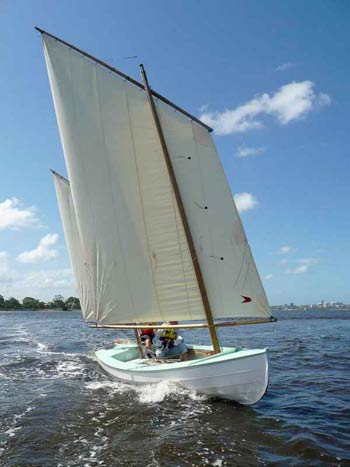 Periwinkle plans include 32 sheets of A3 drawings and a 47-page illustrated instruction manual. There are two separate editions of the plans – Imperial and Metric .

Video shot by Rick Sutton from his Navigator, edited by
Paul Hernes, and boat sailed by owner, John Shrapnel. 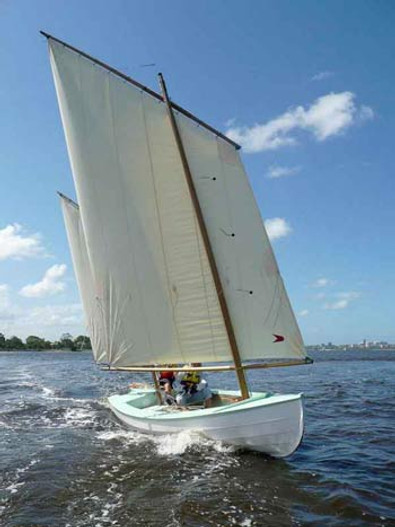