Phoenix III was designed for the builder of the first boat, Paul Hernes. Paul came to me in search of plans for a dinghy which could be sailed fast and far, rowed in such a way as to be more pleasure than pain, and to be able to accommodate a small outboard motor if the conditions required it.

As it happened, I already had a design which I had been working on for many years. She was to be the perfect beachcruiser for my own use, incorporating my idea of the optimum physical dimensions for solo and two-up cruising. The modeling was done using a wooden half model laid out according to the principal dimensions I had settled on after many years of small boat sailing and rowing.

Once the modeling was complete, I made a pantograph which allowed me to take off the sections, which I then drew up as a standard set of lines on my drawing board. These lines remained dormant for about six years until I was approached by Paul Hernes, who was in search of such a design. At the time I was moving workshop and house, so did not have free access to my board. As the job needed to be done straight away, I was forced to teach myself CAD - something I had always said I would never do. Oh well, we live and learn! It turned out to be a blessing in disguise, and it has had cascading benefits.

In order to get the lines into CAD, I initially put my hand-drawn dimensions into Greg Carlson's Hulls program to generate dxf files, and then transferred the dxf's into a conventional (i.e. nothing to do with boat design) drafting program - Autocad's entry-level program, Autosketch.

A major advantage of having taken the step of using a CAD program is that the need for lofting has been removed. The dimensions shown on the bulkheads and molds are accurate enough for direct use, and have been tested by the builder of the prototype.

She has been given a spritsail with a jib set flying (i.e. a jib which is not attached to a separate stay). The spritsail sloop is one of the few sloop rigs which can carry a jib effectively without stays, shrouds or backstays of any type. This is because the sprit places the head of the mainsail in tension, which is in turn translated into tension in the luff of the jib. Therefore, there are no stays on this boat at all - just place the mast into the step and partner, and off you go! 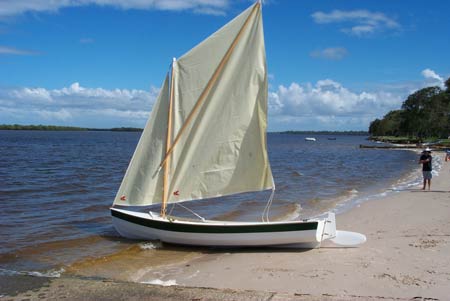 Considerable thought went into centreboard placement and design, as I really wanted the boat to balance under mainsail alone as well as under full sail. This she does quite well. In heavy conditions, raising the centerboard a bit eases the boat and moves the centre-of-lateral resistance aft. I've sailed her in thirty knot winds under reefed mainsail alone, and was quite comfortable (although I am battle hardened, as I also sail a wooden International Finn!).

The centerboard is of generous area, and the centerboard case extends under the main thwart. With a centerboard shape reminiscent of that seen in Swampscott Dories, PhoenixIII's centerboard provides plenty of "bury" in the case when fully lowered, while not interfering with the correct positioning of the rowing thwart. 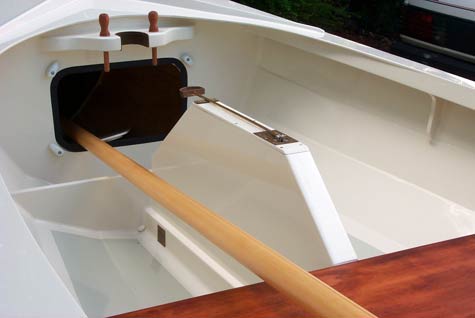 The forward end of the centerboard case has been angled back so that it doesn't interfere with the mast stepping process. There is no need to lift the mast to put it through a hole in the deck - just place the foot of the mast in the step and push it forward into the mast partner. The whole process is a one-handed affair, which takes about thirty seconds.

I've long held the view that the smaller a boat is, the more she will be used, and with this in mind, Phoenix III has been kept to modest dimensions: -

The shape of the hull is a compromise, as is the case with all boats. The breadth has been kept reasonably small so that she can be rowed efficiently with easy-to-stow seven foot oars. A case could be made for a wider hull in order to increase initial stability and sail-carrying power, but I kept my nerve and stayed with a narrow boat. In addition to helping make the boat a pleasure to row, the slender breadth reduces weight, and results in a fine entry angle at the bow. The fine bow angle reduces pounding and helps to make her a dry boat. 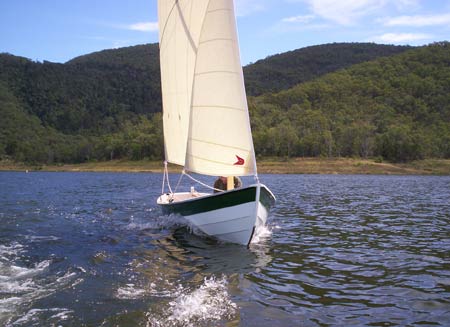 The hull structure of Phoenix III is unusually open and free of clutter, relying on built-in components such as watertight bulkheads, rowing thwart and centerboard case to add rigidity to the glued-lapstrake (clinker/plywood) skin. The glued-lapstrake construction method produces a stressed-skin hull with a very good stiffness-to-weight ratio. Bonding of major components like the bulkheads adds greatly to the strength with little added weight.

I've put plenty of sail onto this boat, and for her to be able to stand up to it the rig needs to be kept low. The whole rig can easily be stowed within the length of the boat, making for hassle-free trailering. 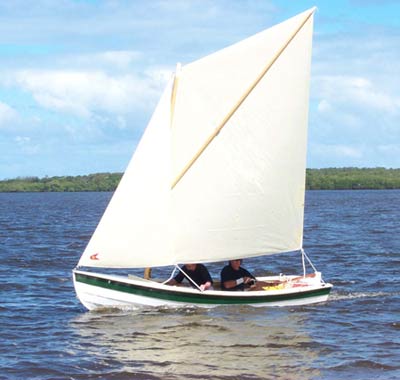 Boomless sails are nice and simple, but they only drive a boat well if the sheeting geometry is correct. Phoenix III has been carefully designed from the outset to be able to operate without a boom on the mainsail. For those who prefer a boom (to ease sheeting loads, or to free up the choice of sheeting points), details for an optional boom are included with the plans package. 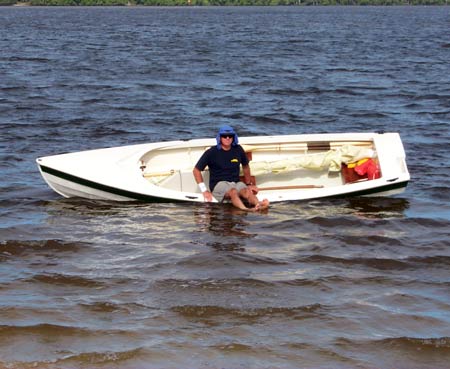 She supports the weight of a 90kg (200lb) person on the gunwale!

There are buoyancy tanks built-in under the fore and aft decks, as well as under the aft thwart. A small, self-draining outboard motor splash well is also built into the aft deck as can be seen in the next photo. 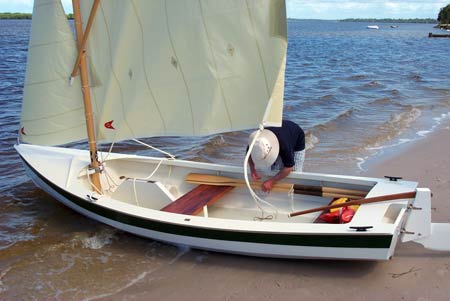 If you want to row, the proportions of the rowing position must be correct, and the oars must be of the proper length. Also, the freeboard (i.e. the height of the sides of the boat above the waterline) needs to be quite low. Phoenix III has been designed to fit in with all the old rules-of-thumb, and she rows very easily. Below is a photo of Paul Hernes rowing on the day of the very first launching. The centerboard case is shaped so as to allow the oarsman to lean back at the end of the stroke. 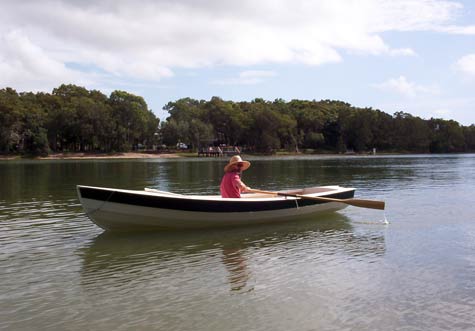 The hull is built upside-down on a normal strongback, details of which are in the plans. There are four permanent bulkheads and a number of temporary station molds made from MDF or construction ply.

All major components of the boat are made from 6mm (1/4") marine plywood, with small amounts of 12mm (1/2") for things such as the centerboard and rudder laminations. Paul Hernes used five sheets of 6mm (1/4") and part of a sheet of 12mm (1/2"). While she is not an "instant boat", a determined first time builder should be able to make a good job of construction as long as he or she does some homework first. I strongly recommend Iain Oughtred's excellent book, "Clinker Plywood Boatbuilding Manual" as well as John Brooks and Ruth Anne Hill's book, "How To Build Glued-Lapstrake Wooden Boats".

As was so often advised by William Atkin and L. Francis Herreshoff, do not make changes to the design without consulting the designer. Everything in the design has been carefully thought through, and alterations could have serious consequences.

The plans consist of twenty-five A3 sheets of drawings, a small selection of photos, and an illustrated instruction manual of forty-odd pages. There are two separate editions of the plans - Imperial and Metric - you choose when you download the files

Just received Ross Lillistone's plans for the Phoenix III...and I honestly think I ripped him off. The plans are spectacular in their clarity and detail---but then there's the bound build book that's gotta be worth $30. all by itself.

The photos throughout both the plans and the book are also amazing. My cat could build this boat (damn, I probably just blew my excuse if I screw this up, eh?)

You gotta tell more people about this guy, especially the newer builders. Just don't tell Ross yet--no sense having him raise his prices until I buy the rest of his stuff. 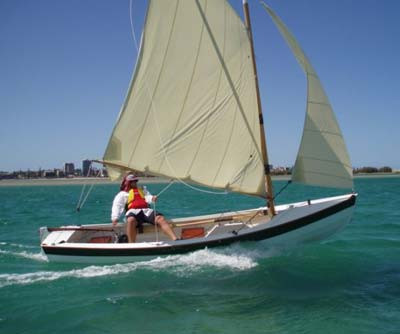