Here is a boat that is supposed to be self righting to a great degree without ballast! Jewelbox has the combination proven by Bolger's Birdwatcher of high sides with a thick bottom and low down crew weight to act as ballast. Karl James told me his boat has righted from having its windows totally submerged. Thanks to Tim Webber for the scans. The Texas grapevine reports the original boat has transferred hands as Karl has gone on to designing his own. No surprise there since Karl had told me of adventures with 5 different boats he had owned. His Jewelbox has been all over the country, including the Mexican trip shown in the photo above, and a lake/canal journey across the Florida peninsula. Here's the write up from my catalog....

The Jewelbox prototype was built by Karl James of Winnsboro, Texas. Here's Karl raising the sail. You can see how safe the operation is. It's all done from inside the boat including stepping the mast. 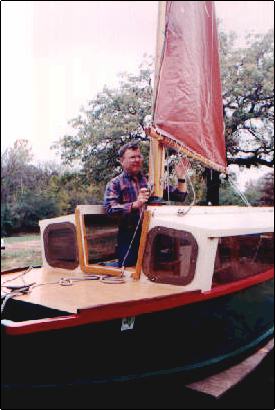 In her first season this boat sailed in Mexico, the Apostle Isles of Lake Superior, Montana's Fort Peck Reservoir, and Yosemite Lake. Karl also brought it to our Midwest Messabout and I had a chance to sail her. We had almost no wind that day and as we ghosted along I asked him if the sail area was about right. He replied that it was right for a Texas wind, hinting that everything was bigger and better in Texas.

I watched Karl launch and rig Jewelbox solo in 15 minutes without getting his feet wet. Stepping the mast is a 30 second operation and it brings up one of the advantages of a lug rig. Jewelbox sets almost 160 square feet of sail on a 20 foot mast you can step solo without strain. Not only is the lug mast shorter than most other types, it can be lighter because mast deflection doesn't harm the set of the sail as it does in other types. So rigging Jewelbox is about like rigging a Sunfish. But this boat will sleep three adults inside the self-righting Birdwatcher cabin with lots of dry storage under the fore and aft decks. Karl trailers his with rudder and 6 hp motor in place ready to go. There's a self draining well in the bow to hold anchors,, muddy shoes, etc., with a step through bow transom.

I should mention that Karl made some beautiful segmented hard covers for the walkway slot. But later he went to a simple snap on fabric job. He greatly prefers the fabric job for camping. The hard covers are used for trailering and storage.

Jewelbox uses self erecting construction throughout. She needs 2 sheets of 3/16" Plexiglass, 7 sheets of 1/4" plywood, and 9 sheets of 1/2" plywood. It's all simple glue and nail construction with no jigs or lofting. 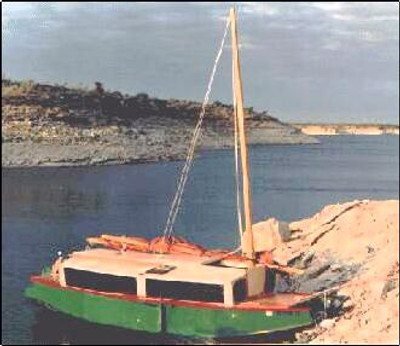