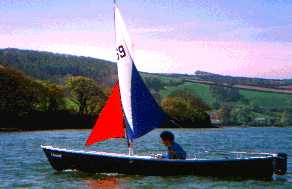 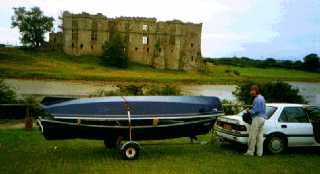 Like the BEE, the LINNET is a seaworthy rowing boat that has been specifically designed for sea use. Accordingly it does not have outriggers or a sliding seat while a small daggerboard is fitted to help prevent being blown sideways by the wind. A good load carrier LINNET can be rowed by 1-3 people. They have been built all over the world and have made some long coastal trips with the crew camping on board at night. Prehaps the most ambitious trip was a cruise down the River Shannon (the longest river in the British Isles) by a BEE and LINNET with the crew sleeping on board at night.

"I had a go in both the LINNET and BEE. I really enjoyed being out, taking turns aboard boats that rowed really well" From a report by Practical Boat Owner 1995 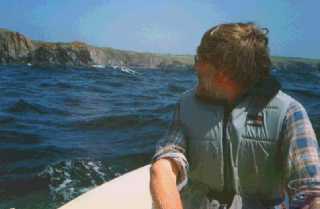 The photo above also shows a LINNET rowing round the Lizard, and sailing in our home waters. We deliberately used a retrousse transom on BEE so that it would not be possible to use an outboard engine. However, the conventional transom on LINNET means that fitting a small outboard (4hp max) is feasible. This will give an easy 6 knot cruising speed, but see the owners comments below!

In praise of the Sea Skiff as Tender or Car Topper
By Peter Sheriff and Linda Thompson, Corfu, Greece

Having grown up on the Thames, I knew just how much pleasure there was to be had from rowing light narrow skiffs. We had room on our catamaran for a 14' tender, so we though why not a sea skiff?

We went to the Wooden Boat Show and saw a wide variety of build-it-yourself skiffs, but the one that caught our eye was the LINNET. She is ply, stitch and epoxy construction and weighed in at 45Kgs. Just right. She had three rowing positions (we were later to find out how important this feature would be), bouyancy tanks, large locker and a transom suitable for a small outboard. Centreboard, sails, rudder and camping cover are also in the design.

So we bought the plans, which were really excellent. They were laid out clearly with step-by-step sketches, cutting diagrams and measurement lists. Everything was clear, nothing was missed - we couldn't go wrong. It was our first attempt at stitch and glue construction, but we had no troubles at all. Really anyone should be able to build with this method. Probably patience is the key factor rather than skill. 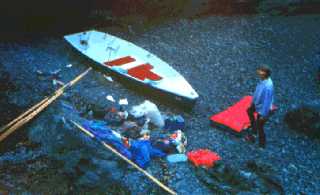 We started out wanting a utility dinghy that would get us to shore carrying things like water tanks, bikes and guests. She does all this with consumate ease. The three rowing positions make anything possible. What we hadn't expected was just how much pleasure we get from her. When rowing from the centre seat with no passengers she just skims along using the long oars and taking long strokes. With two rowing you can really feel the power and can keep going for hours without fatigue.

Last summer we explored the bays and islands round here, doing up to 12 miles in a jaunt. With a bit of sea running she feels in her element and totally at home. Like cycling, head winds make a difference and once, caught out in a meltemi, we had a very slow tiring row home, but we made it fine.


Martin Corrick rowing his Woods Linnet boat Ratty for the first time, in Langstone Harbour
Click Here for a nice blog about building a Linnet 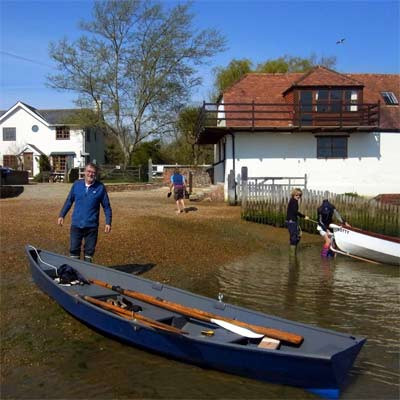