"Dear Jim, I've got to tell you - that little AF4b of yours is a marvel.
I've logged close to a thousand miles on her so far, through streams,
rivers, canals, bays, sounds, and even one unplanned foray into
the wide Atlantic*; in blazing sunshine, driving rain, wind speeds
over 25k, and temps as low as 30º. Never once has she let me
down." So says Rene Vidmer. Beautiful picture and beautiful job
of building and using a boat.

Bruce Given of Virginia Beach, Virginia, did a perfect job on the AF4B prototype shown below. He said he didn't have the shop space to build the 18' AF4 and when I saw the photo of him working I believed him. So I scrunched the 18' AF4 down to 15.5'. I took 1' out of the cabin shortening it to 7', 1' out of the cockpit shortening it to 5', and 6" out of the motor well. I'm pretty sure everything is still acceptable, although the longer AF4 might still be preferred if you can live with the length. The width and depth of the cabin and transom are the same as AF4's. 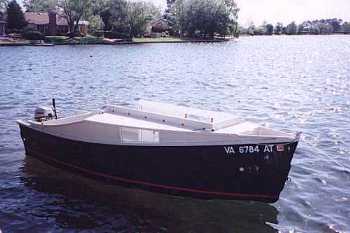 To a certain extent you could build the shorter boat without new plans by scrunching up the length dimensions. That method would be a lot more reliable for a simple flat iron skiff like this one. For more complex shapes where all the panels are expansions, including sides, bottom and bilge panels, it would not be so reliable. Bill Wainright built the original Smoar rowboat by scrunchng up the Roar2 drawings but he is a sculptor and did the job with a model. Later I drew Smoar from scratch. Also the bevels shown on the long boat drawings will not be correct. That might be no problem with a taped seam hull.

So AF4B is a totally new set of drawings. There are two changes made besides the scrunching. I made the bottom 1/2" thick instead of 3/8" as I built into my AF4. Most folks would prefer the extra stiffness. On AF4 I think of the bottom flexing only when running hard into chop. The extra thickness finds its way into a lot of other parts since they are made from the off fall of the bottom panels. You could make the bottom from 3/8" ply and save about 50 pounds on the total weight. The second change adds a bottom to the bow well which lifts the well bottom up about 18". It is more complex to build but the original deeper well is hard to reach all the way into. The area below the new well is accessible from the cabin for an iota more storage. 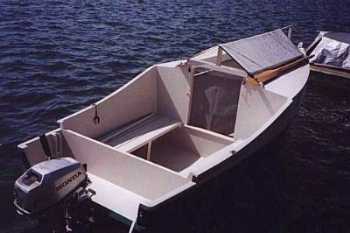 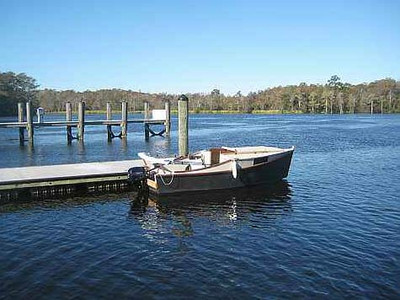