This was supposed to be a cut down AF4, without cabin, but with a large open cockpit for sightseeing, and maybe a canopy over all of those seats. Chuck Leinweber called it a "picnic boat" which is a pretty good idea.

It is the same overall size as AF4, should be about the same weight. In general the bow has a 6' long recessed deck, storage under if you want, followed by a 10' long cockpit with bench seating on both sides, followed by a 2' long motor well segment just like AF4's.

But I did simplify the construction a bit from the original AF4. I made the sides a constant 2' width so you make them by ripping plywood panels straight down the middle with no curves to the edges. Then when you bend them around the bulkheads the bow will pop upward in a nice swoop. The stern aft of 10' is constant width and depth, unlike the original AF4 that had its sides pinched inward a bit strictly for looks. But I like the looks of this new one too. 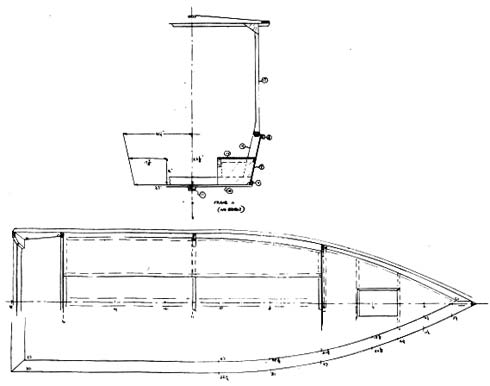 This sort of shape has some advantages beyond the simple setup. Because the hull is constant aft of the middle a fellow could lengthen, shorten very easily. You can't make it wider or narrower easily. In addition, the bench seats are I think pretty much nonstructural. You could omit them leaving the center open except for the center frame. Sit on a folding chair like I do with my AF4. Unfortunately I do think the center frame is needed to keep flexing of the bottom under control. But there are other ways around that, for example using a deeper center shoe. The bottom, as shown, is a copy of what I use on my AF4 now with satisfaction. 1/2" plywood with a 2x4 center shoe full length. Max Wawrzyniak showed me the way on this after my first AF4 bottom proved flexible beyond enjoyment. It is a very simple build indeed. 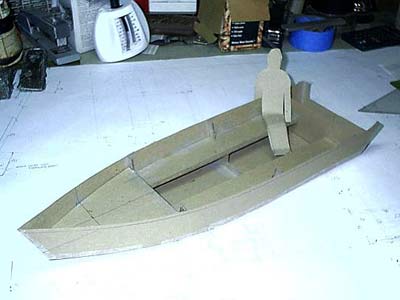 I can picture fishermen making this one stripped down but maybe with the bow deck left to stand on.

The canopy is somewhat bothersome but it is very important if you are to spend all day on the water. A fellow might do just as well to buy a premade job from someone like Taylor Made. Here are the problems I see with a homemade top. For one is weight. The boat can certainly float the weight but weight up high can be dangerous, so I would suggest a polytarp lashed to a simple wooden frame. Best would be a simple frame of aluminum tubing but most of us can't weld it and if you start buying factory fittings and tubing you might find the Taylo Made solution is actually cheaper. OK, next problem is probably that you will want to fold it down for towing and probably will have to fold it down to get it into a garage. I designed this one to fold aft but on second thought reversing the hinges so it can fold forward might be better and hope it will stow nicely on the bow deck. Anyway, the boat will be fine without the top so you could start it out that way and ponder a top solution as you wait for the fish to bite. 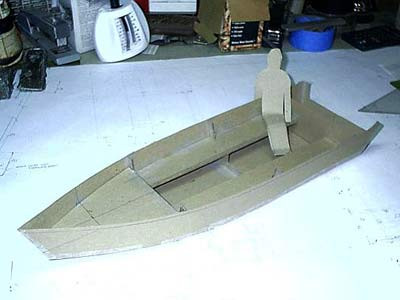