Roar2 is a modification of the original Roar which had a plumb stem. After I had designed, built, and paddled Toto with its V entry bow I went back and cut the lower plumb bow off my Roar and converted it to a Toto-like bow. So Roar2 has a deep V entry which is carried well aft. About two feet of the sharp bow is immersed and provides a skeg action forward. As a result Roar2 behaves well in all aspects of wind and waves and is more capable in rough going.

The new shape makes a different sound - a "swish, gurgle" as it cleaves the water, where the original Roar has a "tap, tap" sound typical of boats that go over the water instead of through it. I suspect the original shape is slightly faster in smooth water but the new bow has the edge everywhere else. She'll row at 4-1/2 mph with medium effort using the 7 foot oars detailed in the plans. Adding a passenger to either version will hardly slow her, although acceleration and deceleration are affected.

Walter Kahlhammer built a clipper version of Roar2 without the bracing shown across the wales and reports his boat was still rigid. But the aft cross brace is almost mandatory for use as a passenger's back rest. Without it the passenger will soon tire and lean to one side or slide aft to rest against the transom, throwing off the trim in a way that will drive the oarsman crazy. (Walter uses a removable passenger seat.) 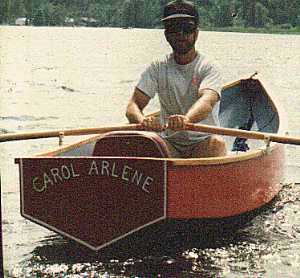 These are excellent camping boats, light enough to solo cartop, large enough for much gear and with a flat bottom plank long enough to sleep on while the whole rig sits upright. Kevin Garber took a Roar2 on a three day row of the Big Bend region of the Rio Grand, seeing no humans from put-in to take-out. He brought a folding chair, a barbecue, and a tent fly with poles. In camp he set up the fly over the hull and slept in the boat. 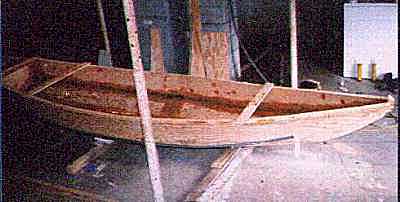 Taped seam construction from four sheets of 1/4" plywood. No lofting or building jigs. 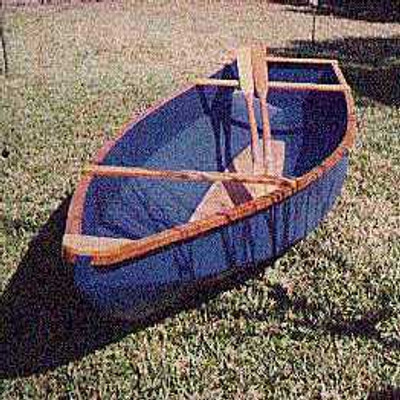