Woobo was designed for the "perfect skiff" competition that Wooden Boat magazine had about ten years ago (hence the name "Woobo"). I didn't win anything and the experience led me to never enter another contest. Although the contest was well conceived I had the impression the final judging was done by no one who had read the contest objectives. The usual result is that the winning boat is the slickest looking boat but not the best functionally. The winning design in this case was quite good but I'd still bet that Woobo is superior functionally in every way. With the demise of the great paper magazine Small Boat Journal about ten years ago, Wooden Boat is about the only way left for a fellow to buy a magazine off the shelf at a book store and get introduced to homebuilt boats. But small simple plywood boats are becoming rare in Wooden Boat and I'm not sure how relevant the magazine is to us anymore.

The boat shown in all the photos was built by Bill Moffitt. The prototype Woobo was built by Dick Scobbie in Illinois and I had a chance to see it get built and used. Dick's boating experience at that time was having made a stripper canoe out of Popular Mechanics magazine. This was his first plywood boat and he had no sailing experience. He built the boat, sewed up his own sails per the instructions that come with the plans, and taught himself to sail. You can do that too. In the Midwest that is the usual procedure because there is no tradition of this sort of boat. There are sailing clubs but they are strictly for racing.

Woobo has the same multichine cross section as my Piccup Pram but, being four feet longer, has still more volume, comfort, seaworthiness, and speed. She takes six sheets of 1/4" plywood compared to Piccup's five and that is a fair indication of the extra work and cost involved. If you're gonna trailer your boat anyway, Woobo would be more boat for the buck. But you can't cartop a boat this heavy.

Woobo's sail rig is a 74 square foot balanced lug set on 11' sticks with and a 12' mast. She has a pivoting leeboard and rudder. She also has a small self draining well in her stern for a tiny outboard or for wet and muddy things like boots and anchors. 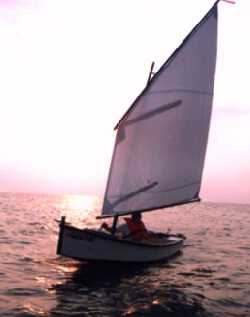 Here is another photo of Bill Moffitt's boat while sailing on the Gulf. Bill made his sail very recently using the patterns presented on this site a few issues back. He used a white polytarp kit from Polysails. I wanted to show this photo because the two large shaping darts are very clear in this backlit photo. This was Bill's first experience with sail making and both he and I would say it was quite a success. Looking at it there appears to be a bit of a wobble in the lower dart but the rest of the sail shapes perfectly to my eye. Also there is almost no twist to the sail overall, a great advantage in sailing to windward. I think proper placement ot the halyard on the yard is critical here and Bill has it right (I'd expect more twist in higher winds). This sail was taped together but Bill said the tapes were starting to lift in some places after a couple of weeks and he was going to sew it all up. Dave Grey who sells the Polysail kits points out that the adhesive tapes should be sewn on to be permanent, although the adhesive by itself will hold for a while. I think that is the future of polysails, myself - assembly with adhesive tapes which are then sewn down.

Woobo has taped seam construction needing no lofting or jigs.

Another Michalak Woobo is Born 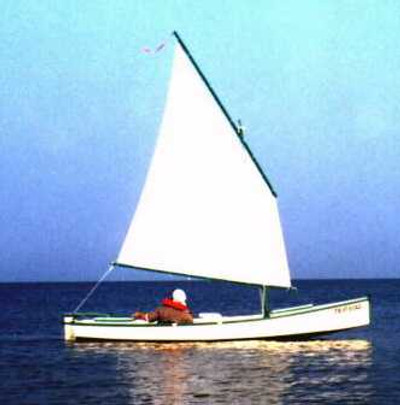