(The following artifcles reprinted from Messing About in Boats Magazine)

Conventional sailboats have a speed limitation, commonly called "hull speed", which is somewhat dependent on length, weight and shape and which sets an effective upper limit of speed possible under sail. This is the result of wave-making by the boat as it pushes the water aside in its forward movement. Hull speed may be increased to a certain extent by making the boat light and long and slender, but the limit, though a little higher, is still there.

Below its hull speed, the conventional or displacement boat is very easily driven. The Indian canoe is an excellent example of a fine lined displacement boat. lt is famous for ease of propulsion at low speed.

Single hulled sailboats have shapes which are largely determined by their need for stability to enable them to stand up to the heeling force of their sails. The result is a relatively full bodied hull with pronounced wavemaking tendencies. Such a boat of, say, 25 feet waterline length will go about 8 mph at best.

The catamaran gets its stability in another way, so each of its two hulls can be made even finer than the canoe. It must be designed for good performance in light winds as well as strong, however, and the limit due to wavemaking though higher, is still there.

The trimaran combines a single line hull, to carry the load, with a smaller hull on each side to provide the stability. The wind pushes on the sails and the trimaran resists the heeling force by transferring some ofits weight to the lee float, which can then push up with a force equal to the weight applied to it. This is in accord with the ancient law that water pushes upward on a vessel with a force equal to the weight of the water displaced by the vessel. The float is shorter than the main hull and if it is canoe shaped or V-bottom design, its resistance to forward movement will increase rapidly with increased load, approaching a hull speed which will be lower than that of the main hull. Obviously this is not good, we expect to go faster, not slower, when the wind blows harder. What to do?

There is another kind of boat, with a planing hull, which gets its support not by displacing the water but from dynamic lift as it gives the water a quick downward push in passing. At low speed the planing boat will behave as a displacement boat but with high resistance since it is a poor shape for low speed operation. It is ideal for high speed operation, however, as the resistance increases only slightly with increased speed and the planing hull is not caught in the hull speed trap. The lift provided increases rapidly with speed increase and is dependent on the area in contact with the water.

Planing floats, the obvious solution for our trimaran. In light winds there will be little load on the lee float, so it will plane at low speed. When the wind blows harder the faster speed will give the float more lift and we have a neat self adjusting system. As load is transferred to the float the lighter main hull has less resistance, the total may actually decrease. The result - speed. This is the high performance trimaran.

Some people will say, "I am not greatly interested in speed, l just want to cruise. Give me safety, with speed a secondary consideration." No argument there, we all want safety, first and the time. There are various kinds of safety. Appendicitis or an infection from a trivial appearing wound may occur on any boat. Speed in reaching treatment is important here. Safety from capsizing is the area which is principally dependent on the design of the boat. A boat will capsize only when the wind forces can push it over easier than they can push it ahead. The multi-hull boat cannot heel to spill the wind, its ultimate safety will depend on its ability to spill the wind by spurting ahead when the knockdown gust strikes unexpectedly. l would not be so rash as to say any boat is non-capsizable, but certainly, the one with the least resistance to forward movement when the lee float is heavily loaded will be most non-capsizable. So, the planing float trimaran gives safety as the result of speed and not at the expense of it. I am sure that anyone who understands the situation will want the fastest boat under these conditions. 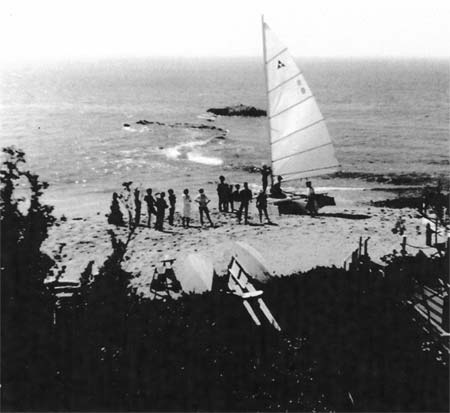 "September 2. 1981: I am the owner of the Triad originally owned by Lee Buffum and, since I am actively using it again. I thought I would write and let you know of its status. After using the boat up in the San Francisco Bay area for about three years, I left to go on job shop assignments in the Pasadena, Maryland and Culver City areas. Each year I thought l'd be back the next year, leaving the boat unused (on the trailer) is really inexcusable for both the boat and myself.

The winds and waters of the Channel Islands area were very easy on the boat. compared with the winds. currents and swells up here, and the boat just had its second major fix-up since I brought it up here in 1975. I have almost always used it as a cruising boat and I really pushed it to its limits in that direction recently when a friend and myself set out for a two-week trip from Redwood City to the Sacramento Delta region.

When I first brought the boat up here the first addition was a motor, which was a necessity up here, and I bought a 5 hp long-shaft Seagull and made a bracket for same. However, the boat is much too wet for a Seagull. which seems to be disabled by a couple of drops of water in the wrong places, and I had a lot of trouble because of its undependability when wet. We had to return the day after we started out because of the motor, which was also suffering from corrosion in the cooling system after the long period ofdisuse. I bought a used 9.8 hp Mercury with external tank, which is really overkill and l've never run it at full power. but it is a really dependable motor. Angel Island to Martinez and then into the Delta itself.

On the way back we were worried about the winds which are usually really blowing into Carquinaz Strait and Suisun Bay, so we stopped in Pittsburg and rigged the boat for night sailing (I've done a lot ofsailing at night up here) and waited for the winds to slow down. I've always had trouble keeping running lights watertight, but we did all right this time with the ones we rigged up. It probably appeared somewhat pretentious to put up a radar reflector on an open 19' racer/day sailor, but I had recently bought it for this occasion since we left around 3 AM and had to go many miles through a sometimes-narrow channel which was also used by oceangoing freighters and tankers (we did pass one going in the opposite direction sometime during the night). We tumed this part of the trip into a 40-mile straight shot from Pittsburg to Angel Island.

As it tumed out, it was :110-day, approximately 175-mile round trip that we had gone on, and included having bridges open for us at our signals and getting a submarine mad at us due to an error on my part. We really appreciated the boat you desi gned, and it worked great both in the Delta and in the Bay, where the winds varied from calm to really wild (the small craft warnings are up frequently these days) and, despite our loading it down with the anchor (standard equipment for me up here), heavy, inflatable two-man raft, sleeping bags and padding (we usually put a tarp over the boom secured with shock cords to make a tent arrangement at night). groceries (we usually had one meal ashore and one on the boat each day, and restocked during the trip). clothes. fenders. :1 total of 8-1/4 gallons of fuel for the outboard motor, etc.

But the boat really works well. In fact. I once went for many miles down the Bay with the leeward float torn open due to a misadventure in Sausalito many years ago. which really gives one confidence in the design.

I have never met anyone else who owned a Triad, but I hope that the other owners are getting at least as much use and satisfaction from theirs as I am. 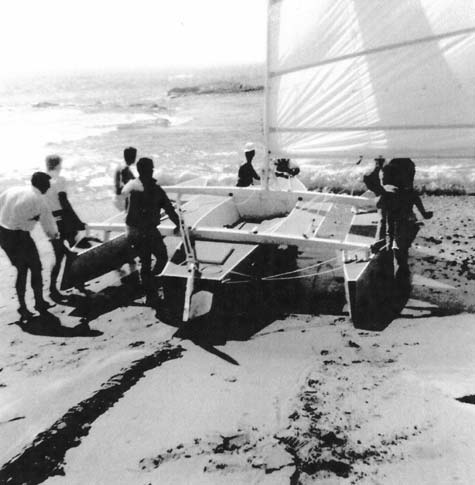 The Boat Handled Like a Dream
By Art York

"November 3, 1968: I have my Triad at the Patuxent River in Solomons, Maryland, a beautiful spot on a deep river with little tide and just a few miles to the Chesapeake Bay for wide open type sailing.

Three of us just took a 28' Piver tri out on the bay because the wind, gusting to 45, looked a little bit rugged for the Triad. We dismasted the boat, so came back in and took the Triad out on the river.

The winds were steady at 30mph with gusts to 40mph. I have never sailed so fast in my life! The other two were out on the float and I was out as far as I could go and still hang onto the tiller. I'd say we were doing better than 20 knots, perhaps 22 at times, with a Star jib instead of the genoa. It was one helluva lot of fun and the boat handled like a dream."

Fond Memories of a Triad
by Art York

Two of your readers have told me that in your March 1, l996 issue you published a letter that I had written to Joe Doblcr. the designer of the Triad trimaran, back in l968 in connection with your review of that trimaran. In that letter I had told Joe about an exciting day sailing the Triad on the Patuxent River in Maryland.

I learned about the Triad back then from Jim Brown, the designer of the SeaRunner series of trimarans. I had called Jim to ask if he had plans for a daysailer tri that would be easy to build. Instead of selling me plans. Jim told me about the Traid, saying that it was a l9' bomb, which I found out later to he very true.

I contacted Joe Dobler, bought a trailer, went to Manhattan Beach, California, and picked up a Triad that Joe had located. I brought the boat to Albuquerque and fixed it for some fresh water sailing in New Mexico, complete with fresh water bottom paint. Shortly before I was ready to do some lake sailing I was sent back to the east coast on a one yearjob in Washington, DC.

I put the boat into the water at Solomons, Maryland and had some wonderful sails on the Patuxent River and on the Chesapeake. The Triad is a high performance well designed very responsive and very forgiving boat. The flat bottom design of the arnas and main hull almost forces the boat onto a plane in an adequate breeze. The feel of this boat is amazing when it breaks free and goes onto a plane. Even more amazing was that the'Triad did this with the bottom coated with barnacles due to the ineffectiveness of the fresh water anti-fouling bottom paint in sea water.

Read an article by Joe Farinaccio in smalltrimarans about Triad - including an interview with Mike Eaton who built the very first Triad. 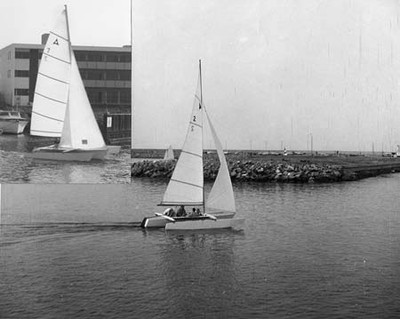