Sportdory is an attempt to improve upon the Bolger/Payson dory I built about 15 years ago. This boat is slightly smaller than my old dory. In particular the bow is lower in hopes of cutting windage. the stern is mostly similar. The center cross section is about identical. This boat has slightly more rocker than the original Bolger dory.

The hull is quite simple and light, taped seam from three sheets of 1/4" plywood, totally open with no frames. The wales are doubled 3/4" x 1-1/2" pieces to avoid the wale flexing my first boat had. I've added an aft brace to stiffen it up and give the passenger a back rest.

Mine once covered 16 statue miles in four hours. In rough water you will feel the waves are about to come on board but they won't. But if you try to stand up in one it will throw you out with no prayer of reentry.

The prototype was built by John Bell of Kennesaw, Georgia. Here is a photo of John's Sportdory under construction. You can see the sides and bottom, precut to shapes shown on the plans, wrapped around temporary forms and "stitched" together with nylon wire ties in this case. I'm quite certain that with this design one must leave the forms in place until all the structural elements like the wales and cross bracing have been permanently installed. If they are removed before then, the assembly will change shape and you won't get the same boat. In particular I think the nose will droop to no one's benefit. 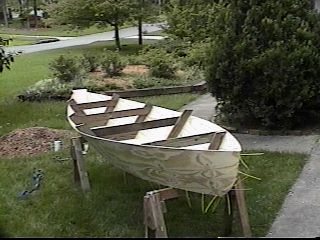 One might wonder about a comparison of Sportdory, Roar2 and QT. They are all about the same size and weight, a size and weight I've found ideal for the normal guy. They are small enough to be manhandled solo yet large enough to float two adults if needed. They are all light and well shaped for solo cartopping. Roar2 is probably the most involved to build and the best all around of the three. Sportdory is simpler and lighter, at least as fast and as seaworthy, but most likely will feel a little more tippy and less secure. You shouldn't really try standing up in either of these two. QT will be the least able of the three as far as speed and seaworthiness but may be the easiest and cheapest of the three and is stable enough to stand up in. So take your pick. 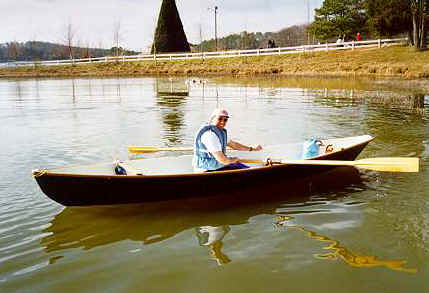 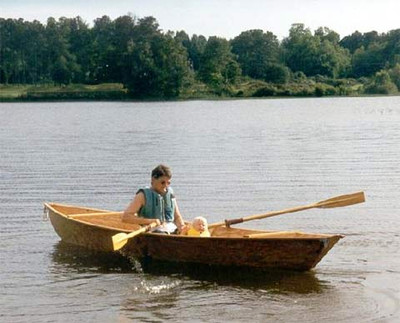