In September 2010 I was very pleased to announce the launch of my first powercat design, the trailable Skoota 20 (although I'm afraid to say it is still cosmetically unfinished). The photos below show it on launch day.

It uses a central 25hp Yamaha outboard and features a small central cabin (with double berth and galley) so can also be used as a basic cruising boat. 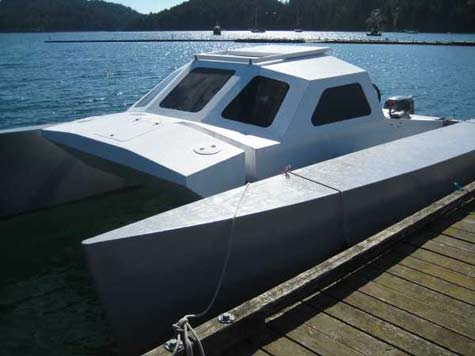 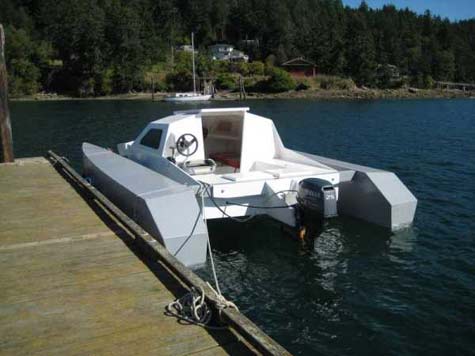 With one person on board it will do 15 knots, or 14 knots with three on board. The Skoota hull is a semi-displacement hull, so unsuitable for higher speeds. I actually designed it to run at 12 knots, so 15 was a very pleasant surprise.

The overall beam of Skoota is 12.5ft, but it folds, like my similar length sailing catamaran Wizard, to 8ft on the trailer. Which is one reason for using a central engine as two would make the steering and throttles harder to organise.

Note, the Skoota design actually has transom steps even though the prototype has decked over transoms.

However before motoring far I will be fitting a small (4hp) get-me-home outboard on a transom bracket. That's because I am very nervous about the Skoota as I have never before owned a boat that I couldn't sail home. But I know that for many, if not the majority, of boaters a single outboard is all they have.

As I just said, I am a sailor, not a motor boat man. So I have been using a very experienced outboard motor/small craft expert as a consultant, although after the first few minutes he tends to lose me during our discussions. But then, why use a consultant if you know as much as they do? His advice seems to work though, for after seeing the videos (above) he wrote:

"Your latest videos show proper trim , no wake between the hulls, no rooster tail. Very impressive actually. I think you are getting her dialled in now. 15 knots on 20 foot hulls ! That is unbelievable. And there is no visible bow wave! I think it's in there somewhere, right under your cg. You can't possibly be displacement at that speed. Bravo! I am very impressed."

And then later, after I emailed him my final outboard nacelle drawings he wrote:

"That looks very good. You are adding about 15 degrees of driveshaft angle and 5 inches of depth simultaneously. So when the going is tough you can tuck your bows in and slog it out, and when the conditions allow you can let her run her bows higher. Users can experiment with trim pin positions to fine tune the system. The result is a completely tune-able boat. A 'completely tune-able, semi planing, single engined power catamaran' Brilliant."

And my consultant is not alone in his praise. These two recent emails about Skoota are typical:

I just finished watching the Skoota 20 launch videos. As I watched the video, I kept on saying to myself over and over again was "THIS IS EXACTLY WHAT I'VE BEEN LOOKING FOR!!!". ED.

"I have watched the video footage....and I've only got two words to say... VERY IMPRESSIVE Those lovely slender hulls look very efficient. My ultimate goal is to travel in that elusive 12-16 knot range regardless of chop. Skoota looks to be just what the doctor ordered. " NJ 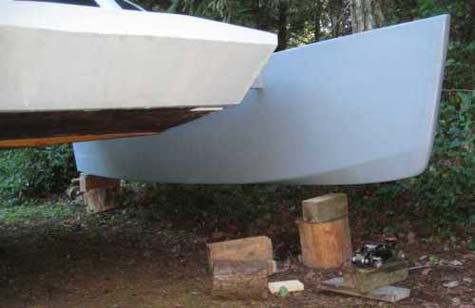 The photo above was taken as we were moving the Skoota to its winter storage behind our house. You can see how stiff the boat is, one hull is only supported at the transom, the beams hold the rest of the hull up in the air. (The other hull has supports at bow and stern of course). I think you'll agree this is a pretty extreme test compared to what a boat endures when at sea.

Although not a Skoota, the photo below (of the much bigger Savannah 26) shows the trailer to water principle. As the trailer backs into the water the buoyancy of the hulls opens it out automatically. On retrieval gravity folds it up. Two bolts hold it all together when afloat, strong enough as the photo above shows. So no lifting or winching needed - nature does the work in seconds. 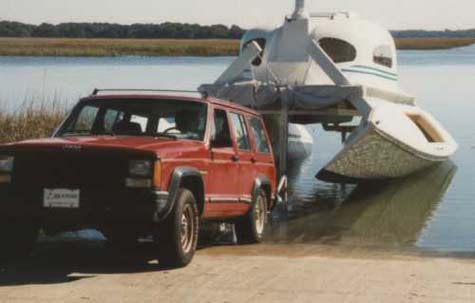 Skoota 20 plans are now available as a pdf download. I have also drawn a 24ft version for those who want a more cruising orientated boat. You can download a studyplan HERE. It also includes some more details on the ideas behind the Skoota range. Plans for the 24 will not be available until later.