Long time readers may recall this design as being in the prototypes section a while back. One was being built and nearly completed when the builder had to put it aside to work on some realities of life, something that happens to all of us from time to time. But another prototype was soon underway. 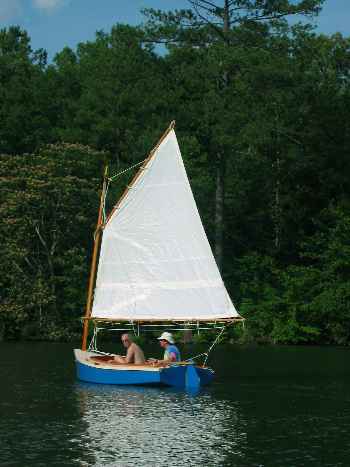 Skat is a small traditional looking catboat based on a similar boat in HOW TO BUILD SMALL BOATS by Edson Schock. My copy is undated but the style of the boats suggests to me that it was written in the 1950's. The book's hulls are plywood but none are done "instant" style. I admire Schock's designs for their simple good looks and wholesomeness. Skat is like the little catboat in that book but is a taped seam instant boat with a gaff rig and kick up rudder replacing the original's Marconi rig and barndoor rudder.

The 81 square foot gaff sail works with a 14 foot long mast which should make for better trailering than the original 21 foot mast. I kept the centerboard layout and I think this is just one of two boats I've drawn that had a centerboard. A leeboard won't work with this traditional shape. For a leeboard to work here the entire rig would have to be shifted aft at least a foot. 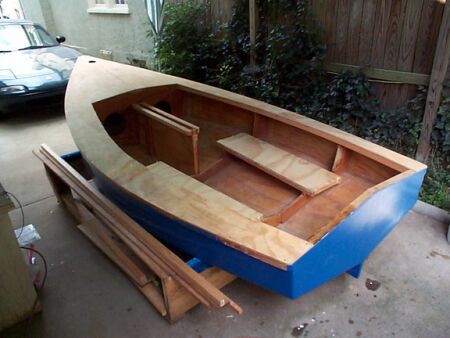 Construction of Skat calls for three sheets of 1/4" plywood and four sheets of 3/8" plywood. No jigs or lofting required.

The prototype Skat was built by Tidmarsh Major in Georgia. He took his time and did a great job including making wonderful details that I never show in the plans. You can see it is a 12' boat that will handle two full grown men. Here is a letter I got recently from Tidmarsh:

I'm just back from a week at the Gulf of Mexico sailing Skat, and she performed beautifully. I took my stepfather out for a couple of long sails and he was thoroughly impressed with how well she sailed.

We launched at Fort Morgan Marina on Mobile Bay and sailed to the mouth of the bay. The Marina is a mile and a half or so from the fort, so it was probably two and half miles or so to the point. We sailed upwind through about a 1 foot chop. It was a little bit wet, but Skat made good progress in the brisk breeze.

At the mouth of the Bay, we headed out into the Gulf with the ebb tide. There were some pretty good sized waves (2 feet or so) coming from several directions as we exited the Bay and the ebb tide met the current along the beach, combined with the wakes of all the fishing boats coming and going. Skat sailed happily through it all.

After that, it was about a 7 mile run downwind to the house we were staying at through 2 foot swells. Along the way we saw a large pod of dolphins (10 to 15) who swam within yards of the boat. In total, we made about 10 miles in just over 2 and a half hours.

All week, we kept the boat pulled up on the sand, and went out daily. We saw dolphins every day, and at one point had 3 adults and one child out for a short sail. Winds were light, but Skat moved gently along anyway.

One afternoon I was out in about a 2 foot chop. Skat would make some progress to windward, but not much--the chop pushed us back nearly as much as the sail pushed us forward.

At the end of the week, we sailed back around the point to the boat ramp at Fort Morgan to take out. The final cruise was a good bit longer than the first, however. We had a favorable breeze to begin with, and for the first 2 miles had an easy beam reach. Then the wind died for about an hour. There wasn't a ripple to be seen. Once the wind picked up, it was a light breeze from the west, exactly the driection we were headed. For most of the trip, we beat to windward in about a 5 knot breeze, then headed into the bay with the tide, again through 2-foot seas, and finally made the boat ramp just before dark, for a trip of about 5 and a half hours. 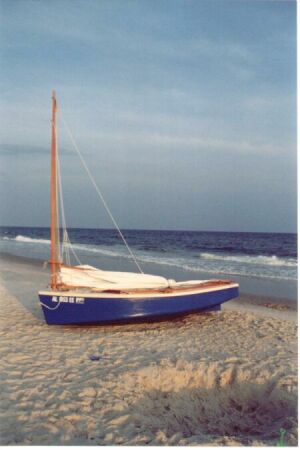 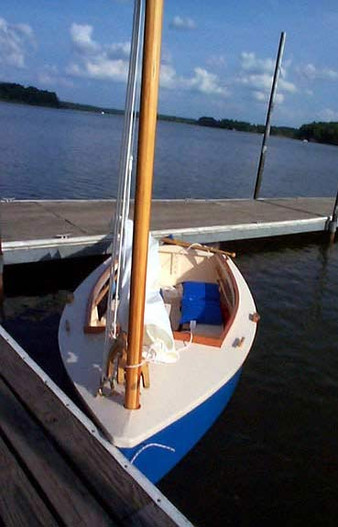