Do you have a swamp in your back yard? Turn that into a positive thing with a tradional punt that you push through the shallow water with a pole. I think this sort of boat has a long history and the similar shape in Chapelle's great book AMERICAN SMALL SAILING CRAFT goes back to at least the 1700's. Those weren't built of plywood, of course, and would be a lot heavier than this one. Actually Chapelle shows the shape of the old one as more elaborate than this one but I'm pretty sure this one is in no way harmed in function by the simplicity of its shape. 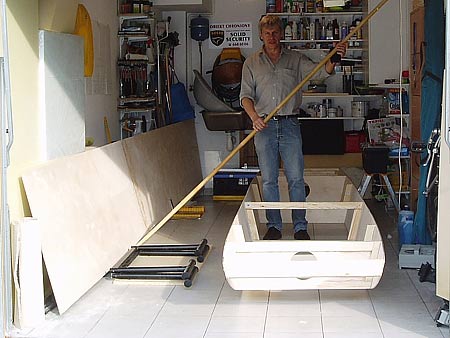 In particular I drew in a feature that I saw on a commercial aluminum jonboat. That is a constant width bottom. I used that feature on my Jonsboat design and it works very well. It might make the boat easier to build although something like Polepunt is easy to do in almost any case. I kept the bottom dead flat in the center 7' with no frames there so that you might walk the center as you push the pole. The boat is narrow at 30" inside on the bottom and I'm hoping that will make it stable enough to stand in. But such a light boat will be dominated by your weight and you will need to be careful how you stand. I've also shown rowlock sockets on the drawing and this might suit as a rowing boat using a removable seat. And this might be very suitable for floating streams with paddles, a substitute for an aluminum canoe. I see no good way to use a motor on a boat like this. The ends (which are identical) are swept way upward for good lines at slow speed and won't support any weight fore and aft. The only chance for a motor would be with an electric with remote steering so yo can keep your weight forward for proper trim. I've written words like that for almost all my arm powered boats and I still get regular photos of those boats with motor plates mounted on the stern. But I never get photos of those boats under power most likely because the owner tried it just once and never again after it tried to stand on its stern when the motor was fired up. So if you want power, and there is nothing wrong with that, build Jonsboat instead.

Anyway, our old buddy in Poland, Wojtek Baginski, built the prototype to perfection. In one of Phil Bolger's books he says the real trick of designing a successful boat is to get your design into the hands of the right user, and so it is with Wojtek. Here is his account of the maiden voyage:

"Here is a brief description of polepunt nautical characteristics. The first is that polepunt is incredibly stable. During our cruise the crew (Wojtek Baginski is in the stern in most of these photos and his boating buddy Wojtek Holnicki in the bow) was often forced to gather on the stern first, and next on the bow (after boat's center has passed over the bar) to jump over a tree or a branch laying in the water, not stopping the punt. We were using the internal stiffener as a walkway and it helped much to keep the balance. 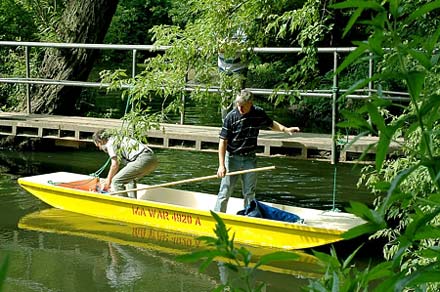 The second notice is that polepunt responds to oar action very well. After more of less a strong push of a pair of paddles she smoothly went a long distance on calm water. Looks like rowing will be successful as well, when an oarsman will take a seat at the center of the boat, and will pull the boat with the pair of 7 foot oars (we have chosen a pair of heavy ones for the Vistula , because of possible wind and waves acting on her open area against the boat). As for using a pole, it's really amazing and effective power, but needs a bit of experience. Worth learning! 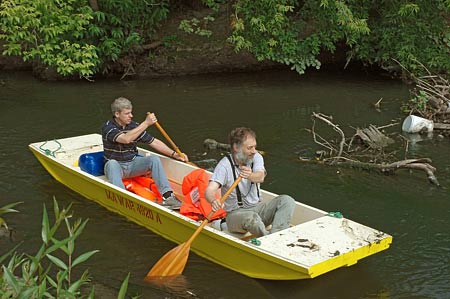 Another notice is that the boat is surprisely strong, I think because of relatively low ratio of free plywood surface to chine logs, stiffeners, gunwales and frames. She got a few strong hits and scrapes from wooden, concrete and stone objects, but generally everything is OK, external chine logs gave good protection to the sides in extremal conditions. I laminated the bottom with a fiberglass twice, inside and outside, by the way. 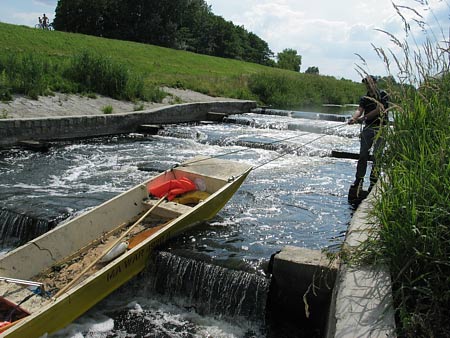 So, the boat is really useful in various conditions (we checked her out during 20 km long raft in various water areas including wild state creek, regulated state creek, small man made lagoon and big river). I think with her low cost and quick building process she is a very good proposition not only for beginners but for advanced adventurers as well (hey don't look at me! :). 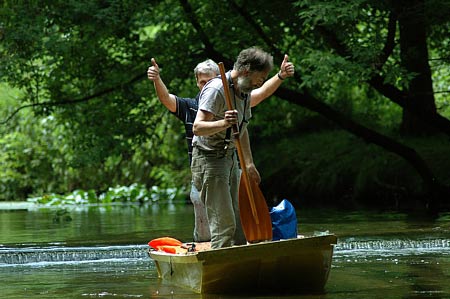 I want to point out here that a stream like this clearly isn't meant for modern boats and if you have a boat like Polepunt you can navigate it and pretty much have it all to yourself. This can be really high quality boating.

Nothing to builiding Polepunt, of course. Nail and glue construction from four sheets of 1/4" plywood.