OliveOyl was designed for someone who liked AF3 but wanted more cabin room and comfort, but not more length. So I actually had some AF4breve drawings handy when I drew the lines for the new boat. Although Olive is the same length as AF3 the cabin is deeper and the bottom a foot wider. One thing the owner did not want, which made the larger cabin possible, was a large cockpit. So I've drawn a bridge deck which extends into the cockpit, reducing foot space there, and also just borrowed length from the cockpit and put it in the cabin. So the floor length in the cabin is over 8'long but you will probably sleep with your feet stuck under the bridge deck. I suppose the downside is that the cockpit is less than 5' long so two adults would fill it. I am guessing an empty weight of 500 pounds but it will take 2000 pounds to put its stem in the water so she should take a fair load.

I suppose I've learned a bit since I drew AF3 a while back. One thing I've learned is that when beached a boat like this is much easier to board if the bow is not too high, thus on this boat I've cut down the bow enough so you can sit on it and swing your legs around right into the cabin entry in the bulkhead, I hope. The owner did not care about that and I don't think she beaches much in her area.

Now, the owner wanted a conventional cabin with sliding hatches so I drew that. And with it went a mast mounted on a tabernacle. I drew the mast off center as I normally do, attaching it to one of the main cabin deck beams. That moves it out of the center of the boat where you will be sleeping. But this boat could be simpler if it had my usual open slot top with a one piece mast. Such a layout would be a lot better I think for a boat which would be sailed off a beach too since it would allow the skipper to hop on the bow after pushing off, and then run upright back to the cockpit. As is he would have to creep down and through the cabin or go over the cabin but I should warn you that, with AF3 at least, standing on the cabin top is an invitation for capsize. After all, these are not large boats. 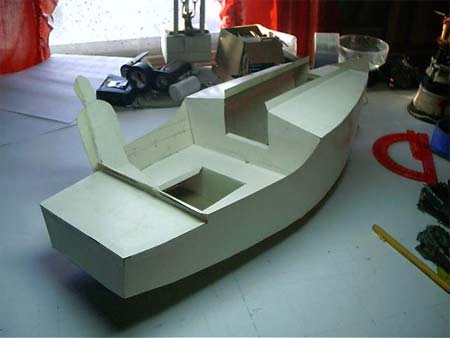 The rig shown is pretty much right out of the AF3 experience, in particular with AF3's balanced lug rig. The spars are short and cheap and the mast short enough that the tabernacle won't be required if the open slot top is used.

But I doubt if OliveOyl would stay with an AF3 in a race. She has the same rig but she is wider, deeper and heavier and bound to be slower. On the other hand she is a much better overnighter since the AF3 has a minimal cabin suited for a backpacker. 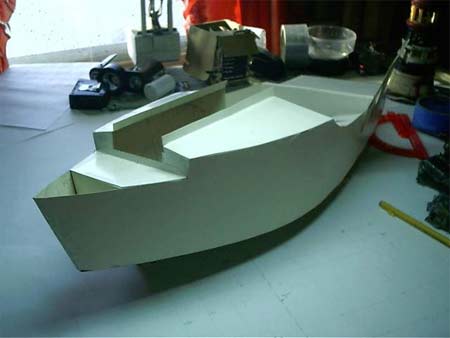 In a lot of ways I think OliveOyl is more of a shortened Normsboat and if you don't mind the extra length and the weight and cost that go with the extra length, Normsboat would be I think a lot more boat for the buck.

Conventional nail and glue construction. She needs seven sheets of 1/4" plywood, two sheets of 3/8" ply, and four sheets of 1/2" ply.