Eventually I tweaked Mixer to have a "through the water" bow. It's the same change that Roar went through to become Roar2. I called the new boat Mixer2 and here are some lines of it.

The rest of the boat is identical to Mixer although it appears that I fined up the stern a bit too. I suppose that the original Piccup is about 70% sailboat and 30% rowboat, Mixer is about 50/50, and Mixer2 is about 70% rowboat and 30% sailboat. From the Roar experience I would expect Mixer2 will row a hair slower than Mixer in smooth water, but have the advantage everywhere else. It will track straighter in a crosswind and be faster in waves. So there is a bit of a choice.

There was a Mixer2 built by Ray Gallagher of Conifer, Co. He is still learning to sail. The photos show his Mixer2 afloat on a mountain pond.

The paper photos show the details better and I can say that Ray did a first class job on the boat! We really don't have a sailing or rowing report.

In this photo you see a child and woman with the boat trimmed stern down. The transom is still mostly clear of the water and I'd bet the boat would go pretty well even trimmed this way.

It's worth looking at the sail a bit and noting that it could be hoisted higher, and I would do that. The sail on Ray's boat is the same small 55 square foot sail as on the original Piccup as shown in the title box photo. I am in the habit when sailing an unreefed balanced lugsail of hoisting it all the way to the top. I guarantee that everything that happens in sailing will conspire to drop it down so you need to start with it all the way up. With these little ones there is no need for a mast head pulley - just run the halyard through a well polished and waxed hole. So here is how I would set one of these. First loosely set up the tack line and the loop that locates the boom to the mast. Then haul the sail up all the way up and cleat off the halyard. (If you haven't loosely set the tack line first then the sail might fly around like a kite.) Then reset the tack line as hard as you can, you can hardly over do it. Usually when you set it up properly this way you will see, with no wind in the sail, a tension fold running from tack to peak in the sail. Usually when the wind fills the sail that fold will disappear and you will get a smooth tight sail. 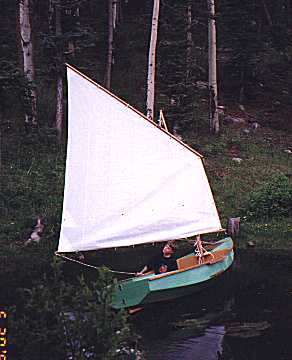 In these photos of Ray's Mixer2 you can see a tension fold running the other way, from throat to clew. That's not good for sail trim. Probably needs more tension on the tack line. (You could also retention the halyard for the same effect but the tack line is usually easier.) The lack of tension will cause the sail to twist in use, spilling the wind, making the top of the sail area more or less useless.

I'm not picking on Ray. He'll get it right. 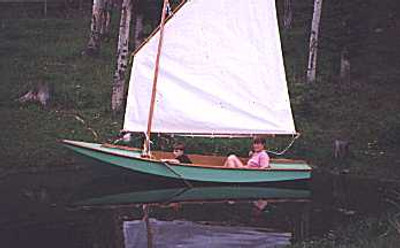