They call it "The Great Catalina Island to Marina del Rey Rowing and Paddling Derby". That may not be the official title, but that is the popular name. It is staged annually around October first, by the California Yacht Club. The course covers 32 nautical miles of mostly open ocean.

This rowing free-for-all attracts oarsmen (and women) from a distance. The San Francisco area, including Monterey Bay and The Delta, has a long rowing tradition. Some of the strongest competition comes from the fine rowers and boats from The North. Gordon Nash, of Sausalito, builds the "Viking", a very nice 22 foot, 2 rower Whitehall type. Chuck Gallagher, of Santa Cruz, builds the "Monterey Bay 22", a 2 or 3 rower Whitehall type in fiberglass. Both men will be sure to compete, along with several of their boats rowed by others. The San Francisco Police Athletic Association has a very impressive 34 foot, 6 man, wood, lapstrake boat, new in 1981.

Early in 1981 Ken Handman was thinking about a boat for the big race; something for perhaps 3 or 4 rowers. He came to California Custom Yachts for advice and they recommended me as a designer. We got together and agreed on a length of 25 feet and a beam of 4 feet. The details were pretty wide open. I had been admiring the Whitehalls, Cornish Gigs and other traditional types that were coming on the scene. I had designed a number of light pulling boats using a modified Swampscott Dory section ln combination with Plywood Taped-Seam Construction, AKA Stitch and Glue. Some of these boats were built by California Custom Yachts, who specialize in Wood-Epoxy technology. The boats were light, strong and good looking. With the simple construction using very few parts labor cost is at a minimum. The new design used the proven construction. The shape was what I hoped would give us the combination of seaworthiness and speed found ln the best of the traditional models. Cal Custom did a first class job of boatbuilding, quickly. The boat looked good. Ken had picked a name - Millennium Falcon. With a name like that it had to be a winner. 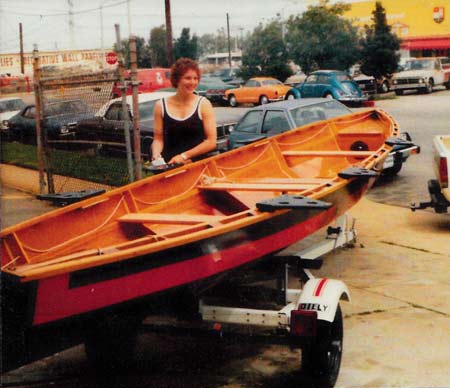 The boat was launched and performed well with 2 and 3 rowers, using fixed seats and oarlocks on the gunwale. It was apparent, however, that sliding seats and outriggers were needed to develop the boat's full potential. Ken bought 3 Martin Oarmaster units and the builder installed supports consisting of 2 full length plywood webs inside bonded to the bottom. The webs have spruce caps to which the Oarmasters are bolted. Separation of the webs is determined by the Oarmaster bolt pattern and the height by the need to give the outriggers about ½" clearance above the gunwale. Oarmaster locations are completely variable so that combinations of up to 4 units may be used. 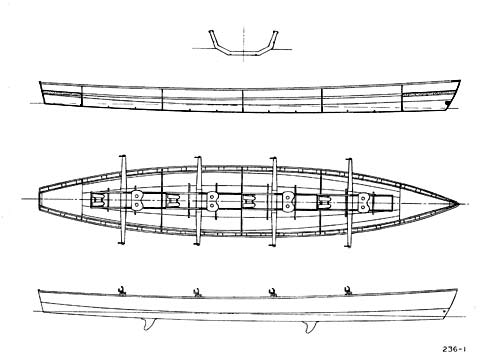 The Millennium Falcon fitted with Oarmasters

A small swing up rudder, controlled by tiller lines was installed. Two surfboard type skegs were installed at about one and two thirds length from the bow, to reduce leeway.

The construction is very light, seemingly fragile by ordinary standards, but the boat has come through severe conditions with no sign of weakness. The planking consists of 2 strakes of 4mm Occume plywood (Bruynzeel) on each side and a bottom of ¼" fir plywood. The 4 joints in the planking are taped inside with fiberglass tape and epoxy. The outside is sheathed with 4oz. fiberglass cloth and epoxy. There are 5 frames of ½" spruce lapped at the corners, width 2-½" tapering to 2" at the sheer. The end frames are partial bulkheads for bow and stern seats which provide flotation and dry stowage. Sheer stringers, two ¾" x 1" on each side, one bonded on the outboard side of the planking, the other let into the frame heads, with blocking, provide strength and stiffness where it is needed. There are no other longitudinal members except for a small seat stringer about half way up the side. There is no stem or keel. The planks are taped together at the bow and there is a narrow transom. A thwart was installed at the midship frame. Later I reluctantly agreed to its removal to permit installation of the sliding seats. No apparent weakness resulted. The hull, as built, weighed about 200 lb. 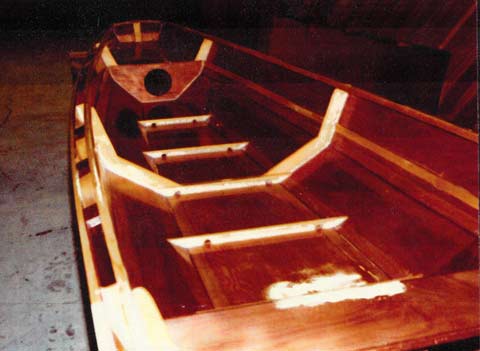 The first test of the new boat came on September 27, 1981. The race was the 25 mile row from Monterey to Santa Cruz, across Monterey Bay. For crew Ken had Northerners Jim Flack and Judith Haglund. They got a good start ln the fog and dark, but by the time they made landfall they were several miles too far east.

The fifth Catalina to MDB Derby was held on October 11, 1981. Jim Flack from San Francisco was again crewing, along with Tom Gestri from Santa Cruz. The race starts about 3:00 AM and each boat has a powered escort. The wisdom of the escort requirement was made evident shortly after the start. Unexpected high winds and seas that resulted from a sneaky cold front knocked all but 6 of the 23 starters. Ken and crew finished first in 7h: 33m. Some of the Whitehall types were among the other finishers. The San Francisco Police "Galley" finished in 10h:19m after their escort was forced to seek shelter.

Good, available rowers are not plentiful ln Southern California, but Ken was able to recruit 2 local stalwarts for 1982. Harry Bellows is young and built like a quarterback. Rob George is older and built like a runner, which he is. Both Joined with Ken to make an effective team.

The first test for 1982 was on July 17, Santa Cruz to Capitola round trip, 6.65 N.M. Harry was rowing Ken's new single, Dawn Treader, while Ken and Hob doubled ln Falcon. Harry came in first in the singles, over an Appledore Pod by about 7 minutes. Falcon finished fifth in the doubles, about 4 minutes behind the leader. They finished behind 2 Vikings, an MB22 and an Alden Double and ahead of 2 MB22s. Flat water and a 2 man crew was apparently not the best combination.

The boats were left in Santa Cruz for the Monterey to Santa Cruz race on August 7th. This time, with Ken, Rob and Harry aboard, Falcon came in first. The Wind was light and the water flat.

The sixth Catalina to MDR race was held on September 19th. This time Ken installed an additional Oarmaster and Tom Gestri rejoined the crew to make 4. The water was quite rough early in the race but not as bad as last year - only 2 boats out of 20 were forced out. Falcon repeated last year's win, finishing seven minutes ahead of the first of the Northern California boats. The time was 6 hours 30 minutes, about an hour better than last year. 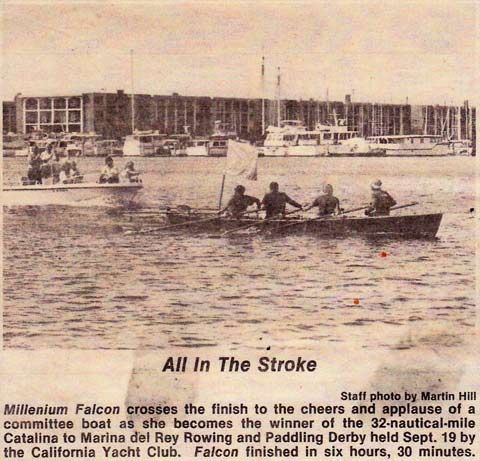 The Derby is the first leg of a triathlon open to any rower finishing. Rob George accepted the challenge. He got out of the boat at the finish, regained his breath and ran 7.5 miles north to the Riviera Country Club. There he got on his bicycle and pedaled 16 miles along Wilshire Blvd. to the L.A. Athletic Club in downtown Los Angeles, dodging the wild drivers. He won the event in record time.

This is not meant to suggest that Millennium Falcon is the fastest rowing boat around. Given their preferred conditions, the racing shells would leave it far behind. Under extreme weather conditions a whaleboat or the S.F.P.D. "Galley" might survive longer. However, it appears that we have a boat that can do pretty well in a variety of conditions.

Certainly, one of the principal factors responsible for the boat's success has been its light weight. The need to eliminate excess weight in a competitive boat is obvious. It seems unlikely that anyone will come up soon with a boat with an equal combination of structural integrity, seaworthiness and light weight. If we put aside our sentimental attachment to the traditional boats built in the traditional manner, we must admit that they are very labor intensive and require skills of a fairly high order. Fiberglass also, has not lived up to its early promise of low cost. Taped seam construction, on the other hand, requires minimal skills and labor. The individual components are relatively few, and once their shapes have been determined, the rest is only a matter of putting the parts together, with little chance for error. The method is equally well suited to the professional builder or to the amateur, building the boat from scratch, using stock materials or from a kit. With rowing becoming increasingly popular, perhaps this indicates a direction toward getting more people in affordable boats. 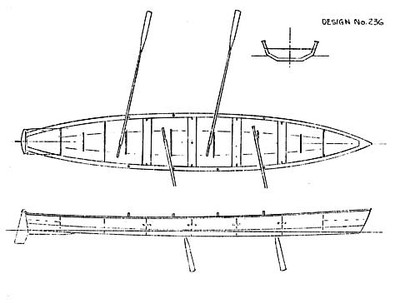