While competitive and recreational rowing is the reason behind the design, there are other possible uses for it. It can be rigged to sail, and being light and easily driven will go well with a fairly small rig. A centerboard trunk is an easy modification and will not impair rowing performance. Some users might want to combine rowing and sailing. If equipped with a simple tent and appropriate gear, it will make a good "Camping Cruiser". People who still have some of the Tom Sawyer-Huck Finn spirit can take it from there.

Neither sex nor age nor athletic prowess are limiting factors. Some of the handicapped have become involved successfully in rowing. Any group interested in healthful, non-stressful, moderate exercise and fresh air may participate. It can be as relaxed or strenuous as desired. It is non-polluting and non-disturbing. It is the best way to observe waterfowl and other wildlife. Competition is possible, if wanted. With only one boat different crews may race by comparing times over a known distance. 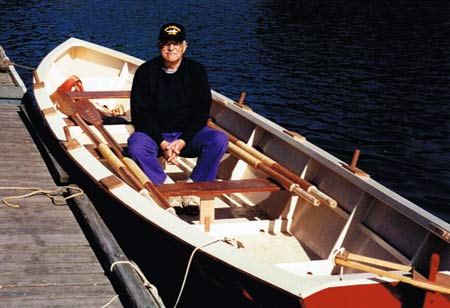 Museums and other historically oriented organizations, particularly those with riverine or marine leanings, may find existing contacts receptive to this activity. Many have facilities suitable for instruction and construction.

Organizations, such as yacht clubs, that have seen the demographics of their membership change with the passage of time, from mostly young hotshots to more settled family types, may -Find a non-stressful rowing program attractive. Retirement communities would seem to be a good field for this activity. Many have workshops where the boat might be built. The materials are readily available and relatively inexpensive. Boatbuilding skills are not required. The components are prefabricated before setup. Unlike conventional boatbuilding, nothing is attached to the floor and the assembly is a quick and easy procedure. The boats are light and easily transported. Perhaps some who are finding golf too frustrating, or tennis too hard on the knees, may find rowing a welcome change, and it is done in a sitting position. Those wishing to do something for society may foster youth involvement. Existing programs for getting young people involved in rowing show that all it takes is a little guidance plus the necessary watercraft. 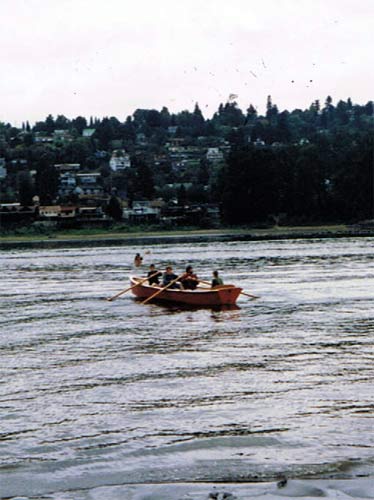 During the steamboat era, before the lumberjacks had finished cutting down all the "Forest Primeval", white pine boards long enough and wide enough to make the side of a yawl in one piece were readily available. That is no longer the case. Such lumber is now just about impossible to find, and if found, is very expensive. Plywood is available, and by using materials and techniques that were not available then, functionally comparable plywood boats may be constructed. They have the advantage of much lighter weight, a major consideration in an era of high mobility.

Quoting from a letter from James Stephens of Marietta, Ohio: "I have an idea for next year that our club will back that may interest you. We want to stimulate interest in rowing among high school kids. There are at least six high schools on the Muskingum River, but none has resources to enter rowing in the modern, sliding seat, high expense manner. We believe we could convince two schools to build a skiff apiece and row competitively. Because they are river towns we think the boats should be in keeping with their history".

There was a time when many river towns depended on steamboats for transportation of freight and passengers. Some of us regret the passing of the steamboat, but it has been replaced by faster and more efficient carriers. The rivers, for the most part, are still there. They are available for healthful outdoor activity. 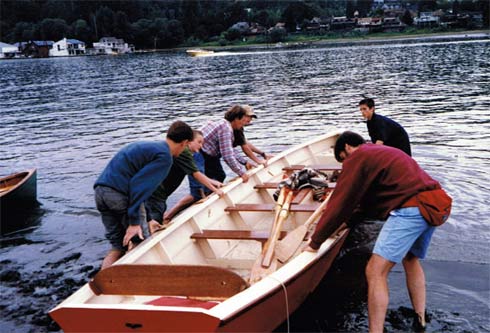 Each steamboat carried a work boat, called the Yawl, or Yawl-Boat. If you look up chapter XII of "Life on the Mississippi", by you know who, you will get a good idea of yawl-boat usage. We have here a boat that is, in form, a typical yawl, though more slender than some. The old yawls were built heavy to take rough treatment, and got even heavier as they became soaked. The new boat is built using Plywood Taped Seam Construction, making a boat that is permanently tight, durable and lighter by half. There is a corresponding reduction in material and labor costs.

Arrangement of oars may be varied. Four sweeps and coxswain is the primary setup, but two, three or four pairs of sculls may be used, The boat may be handled by a single sculler. Seats are fixed and the oarlocks may be thole pins or pivoting metal. The rudder may be locked on center, making the coxswain optional. Rowing is suitable for all ages and requires no special athletic ability or talent. It should appeal to a large percentage of the school population and probably some of their elders. Costs should be much easier on the PE budget than contact sports. Equipment may be built by participants or parents.

It is hoped that this project will find appeal among scholastic rowers for competition and recreation as well as among others at large. Increased awareness of the need to conserve and preserve our water resources may be an added dividend. 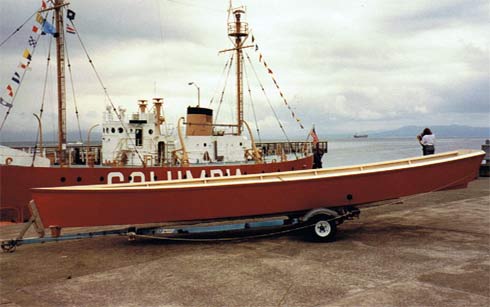 Plywood was not a satisfactory material for boats until about 1940, when US Plywood introduced "Weldwood", which employed a waterproof bond, using the "Hot Plate Process", with thermosetting resins as developed by Leo Baekeland and others. Boatbuilders began using plywood by mere substitution keeping the rest of the structure the same. Some still do. There is nothing wrong with that. Plywood can be substituted advantageously for lumber in various areas of boat structure. Examples are planking, decks and bulkheads. 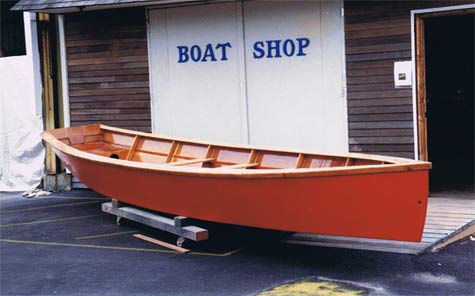 However, the year 1962 saw a major development that changed the whole picture of plywood for boats. That year saw the debut of the Mirror Class Dinghy, designed by Jack Holt, with technical assistance from Barry Bucknell, and backed and promoted by the mass circulation London Daily Mirror. The new boat eliminated much of the lumber and fastenings that had been used only as connectors between plywood panels. They were replaced by taped seams, in which fiberglass tape bonded with a plastic resin made the boat, in effect, a one piece structure.. Polyester resin was used at first. Epoxy was used when it became available and is now the preferred bond. The British magazine Yachts and Yachting of February 8, 1963 told of the new boat and its enthusiastic reception at the London Boat Show. Those of us with plywood experience, who happened to be looking, knew that here was something new and that things would never be the same. The Marietta Yawl takes full advantage of the method and includes a number of innovations developed in connection with numerous other Taped Seam designs.

Construction of the Marietta Yawl named
Joseph C. Dobler after the designer: 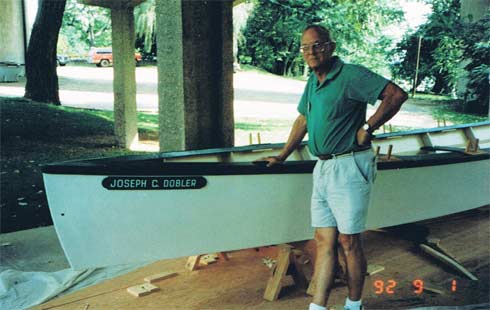 Photo 1:
James L. Stephens of Marietta, Ohio whose idea it was to stimulate high school kids interest in boat building and in rowing - 1992 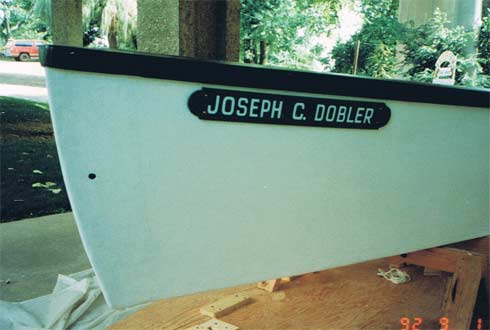 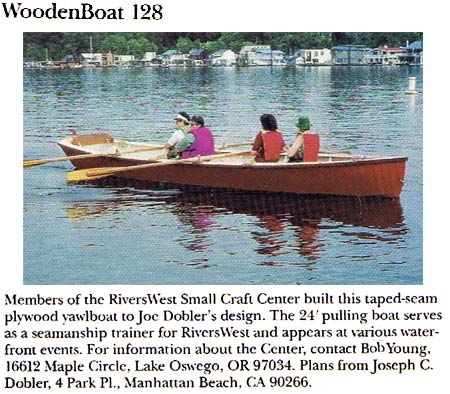