While the MARIETTA YAWL and the CRESTWOOD GIG are designed to appeal to secondary school students and disadvantaged youth, they should interest others.

Neither sex nor age nor athletic prowess are limiting factors. Some of the handicapped have become involved successfully in rowing. Any group interested in healthful, non-stressful, moderate exercise and fresh air may participate. It can be as relaxed or strenuous as desired. It is non-polluting and non-disturbing. It is the best way to observe waterfowl and other wildlife. Competition is possible, if wanted. With only one boat different crews may race by comparing times over a known distance.

Museums and other historically oriented organizations, particularly those with riverine or marine leanings, may find existing contacts receptive to this activity. Many have facilities suitable for instruction and construction. 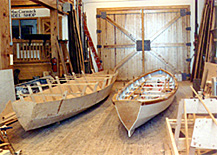 Organizations, such as yacht clubs, that have seen the demographics of their membership change with the passage of time, from mostly young hotshots to more settled family types, may find a non-stressful rowing program attractive. Retirement communities would seem to be a good field for this activity. Many have workshops where the boats might be built. The materials are readily available and relatively inexpensive. Boatbuilding skills are not required. The components are prefabricated before setup. Unlike conventional boatbuilding, nothing is attached to the floor and the assembly is a quick and easy procedure. The boats are light and easily transported. Perhaps some who are finding golf too frustrating, or tennis too hard on the knees, may find rowing a welcome change, and it is done in a sitting position. Those wishing to do something for society may foster youth involvement. Existing programs for getting young people involved in rowing show that all it takes is a little guidance plus the necessary watercraft

While the Crestwood Gig may have a superficial resemblance to other types, such as shipâs boats and Cornish pilot gigs, it is not related to those types. Its remote ancestor is the Swampscott Dory, developed by hand fishermen working from the sandy beaches north of Boston.

The immediate predecessor is âMillennium Falconâ, a boat designed for the annual open water rowing race from Santa Catalina Island to Marina del Rey on the California mainland. At the suggestion of Gene Loveless of Crestwood, NY, Joe Dobler enlarged the design to 34â for six sweeps and cox.

The Crestwood Gig may be equipped to sail. The easily driven hull will go well with a modest sail area. Light air performance is not required since the oars will provide auxiliary power. The masts will be located so as not to obstruct rowing, the sails may be furled in place. A centerboard will limit leeway and also improve tracking under oars in rough water and windy conditions.

Gig Rowing
One of Life's Most Romantic Experiences

The following article is reprinted from Messing About In Boats Magazine. The "Mary Moody" which is mentioned in th article was built by Bob Alban of the Galveston Wooden Boat School for the Houston Rowing Club from Crestwood Gig plans by Joe Dobler.

There we were. Shivering an the wet dock huddled in the early dawn like so many street corner insomniacs. A blue heron, startled by the splash of the first gig, Mary Moody as she broke the quiet of the lake, lifted slowly into flight, sweeping low across the boathouse.

Conversation focused on other oarsmen, those in Atlanta, those sturdy competitors from distant lands who held half the planet spellbound in their rakish shells moving like arrows across the vast expanse of Lake Lanier.

But much of the talk was of gigs, other gig-lovers and that lighthouse row to Boston Light chronicled in Messing About In Boats by contributing writer Michael-McEvoy.

The Houston Rowing Club is the oldest and largest privately owned row training facility in the southwestern United States. With its fleet of 30 rowing craft, including three 34â, all-wooden six-oared pilot gigs, arguably the most active club, especially for Texasâ great army of yesteryear oarsmen who would today rather watch rowing competitions than be training for the gold.

The third boat is now afloat. One by one they pull away from the shore. Eighteen oars arc skyward, then let fall on the still morning sea. Aboard are five nurses, three retired government workers, an astronaut, two attorneys, a Lifeflight doctor, three school teachers, an architect, an airline pilot and an engineer.

Destination: breakfast and fellowship at a lakeside cafe known as Duke's Place. The trip happens every Saturday and Sunday morning, with the small fleet of wooden gigs easing off into Jarboe Bayou with clocklike precision. The point of all this is fun and fitness.

For an hour the crews respond to oar commands, usually with good-spirited epithets hurled at their coxwains. In the distance, the Johnson Space Center looms out of the morning mist. Several small sloops chug, sails furled, down the wide channel leading to Galveston Bay.

The founder of the Houston Rowing Club is white-haired, 65-year-aid Gene Horton, NASA'S first space flight information officer. Now retired, Horton teaches rowing and sculling lessons on weekends and recruits new oarsmen, He also serves as one of the gig coxwains for the breakfast rows,

Two of the club gigs (Mary Moody and Jolly Janet) were acquired by Horton from the Texas A&M University Wooden Boat School on Galveston Island. A third (Lady Lonie) was built in 1995 by wooden boat builder Jon Ethridge of Austin, Texas.

The boat's popularity has exceeded all expectations. They are used for team building with corporations, professional networking, birding expeditions and especially romance. A local club known as AHOY, MATE! performs the service of matching companionable oarsmen and women and placing them together at sea. Several marriages resulted from last summer's sunset gig rows!

Horton and his wife Janet met through rowing and subsequently started the Houston Rowing Club at Watergate Marina on Clear Lake. Today the club has over 200 members.

"Rowing is for us the perfect medium for meeting and really getting to know and enjoy others," says Janet Horton, who doubles as the club's bookkeeper and matchmaker. Workouts are light and allow for a variety of guests rowers, including the physically challenged.