Mikesboat is a big Piccup Pram. It is slightly narrower in proportion. The idea was to have something like Piccup that was large enough to take the family so she has two bench seats 8' long. It should be a good expedition solo boat with a boom tent fitted over the cockpit. Mikesboat has the Piccup layout with buoyancy/storage chambers fore and aft but now there is also enough room for a small motor well across the stern. As a rule something like this needs maybe 2hp to run at hull speed and even then there would be some extra. This shape of hull with multichines has proven good in rough water with fair speed.

Sail rig is the same 96 square foot sharpie sprit rig that I used on AF3 and a few other designs (actually it is the mainsail from a Bolger Jinni design I built 20 years ago). This is a change from the balanced lug rig that Piccup uses but Mike had good experiences with his Mayfly12 which used the sharpie rig and that is what he wanted. I would expect the sharpie sprit to be slightly better to windward than the lug but not by a lot and the sailmaker's talents might be the deciding factor here. There is no doubt that the sharpie sprit mast is perhaps 50% longer than a similar lug sail might need.

Mikesboat uses taped seam construction. Takes nine sheets of 3/8" plywood and three sheets of 1/2", compared to Piccup's fives sheets o 1/4". So you see that scaling up a boat makes for a lot more wood and weight.

I dunno if Mike ever built his boat but Bill Moffitt in Atlanta made one to run the Texas200. He is an experienced builder and sailor and made a thorough job of it in a big rush towards the end. Launching at the Texas200 was its first time in the water. His wife sewed the sails the day before he left for the cruise, and this was her first set of sails! The sail rig he wanted was a lug main with a sharpie mizzen. I drew those up for him and they are now included in the plan set. Here is his boat under sail: 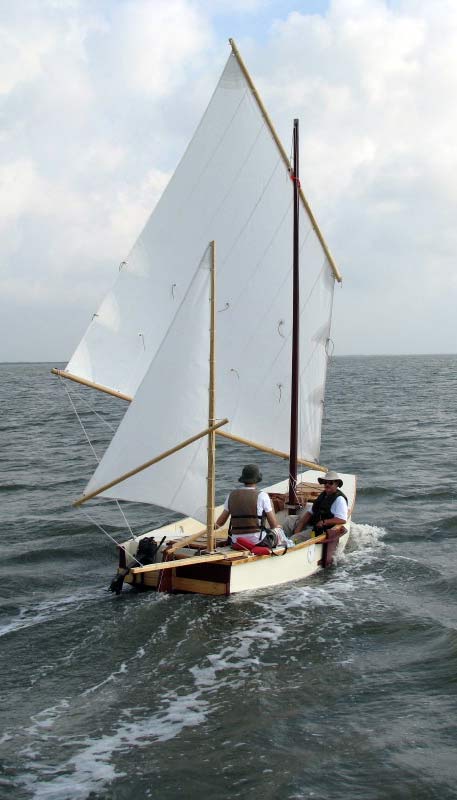 Here is another photo of the boat beached beside Chuck Leinweber's mothership Caprice (which was designed originally for Bill Moffitt!) at the end of the cruise: 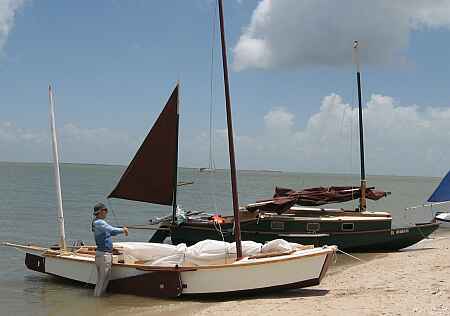 The cruise involved camping through several nights and Bill did something I have always thought about but had never seen. He pitched a standard tent in the large Mikesboat cockpit. A lot cheaper than a custom boat tent, for sure, but it takes a big cockpit to handle it. Mike also had some sort of center platform to fill the space between the long bench seats: 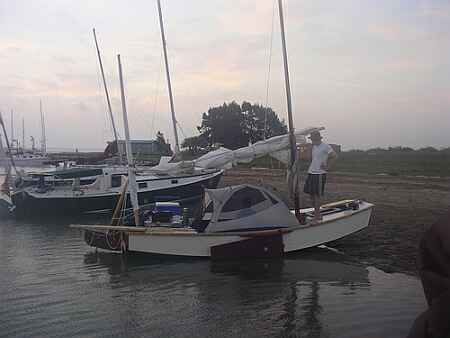 Well, three cheers for Bill and son Paul!!! As far as I know the 200 mile cruise went off without a hitch, the boat right on. But I suggest that most of us couldn't get away with going on a long cruise with an untested design. 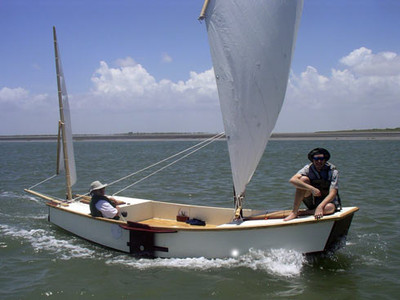