Larsboat was built by Lars Hasselgren to replace a Folboat that had finally met its end. Lars wanted capacity for two, plus decking, as with his old boat.

I took Toto and lengthened it with a 30" plug in the middle to gain capacity. But lengthening a hull with a straight plug like this usually improves a boat in almost every way and Larsboat should be faster than Toto in good conditions. In this case the plug meant I didn't have to refigure the shape of the twisted bow panels as I would if I'd lengthened Toto with an overall stretch. (I can figure twisted panels pretty reliably now, but not back when Toto and Larsboat were drawn.) 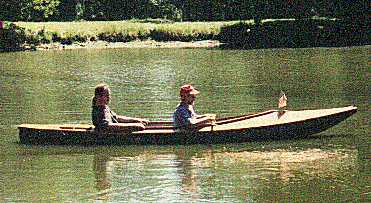 The decking was quite simple because even the original Toto could take a forward deck of flat sheets with a center peak. I should add that I feel the decking is very optional. This prototype weighs 61 pounds and deleting the deck might cut another 10 pounds or so. The undecked boat also would have a better cartopping shape. I'd keep the stern chamber. It will ease your mind about taking a big wave over the stern.

This would be a preferred project for someone who intends to do a lot of cruising and camping. In the Toto camping I've done the sleeping room has been OK, but the storage is limited. Larsboat would be better both because of increased capacity and because there is dry storage under the bow deck.

The basic hull is taped seam construction needing four sheets of 1/4" plywood for the decked version and three sheets for the undecked version. No jigs or lofting required. Plans are two blueprints with keyed instructions.

The photo above is of Bob Smithson's Larsboat. He customized the decking a bit. I think he also built the boat of 1/8" ply to save weight. I've forgotten what his boat weighed but he did say it was sufficiently rigid for him.

Bob Hoyle built this one without a deck down in Florida: 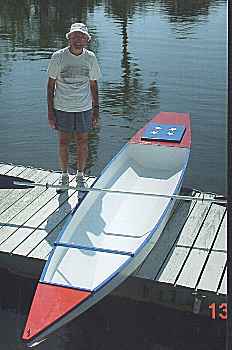 Paul Moffitt built this one. You can see this is a much better two person boat than the shorter Toto: 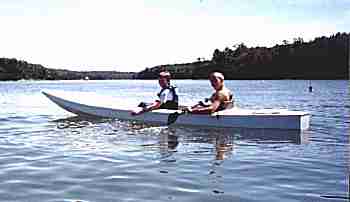 And the old outboard motor guru Max Wawrzniak often goes for a paddle in his Larsboat: 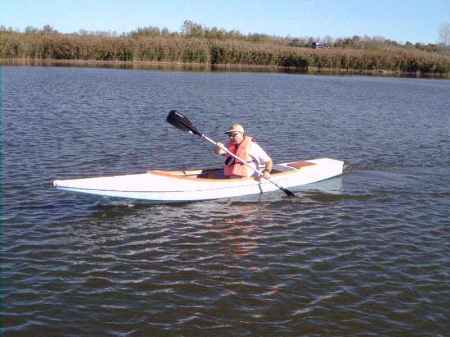 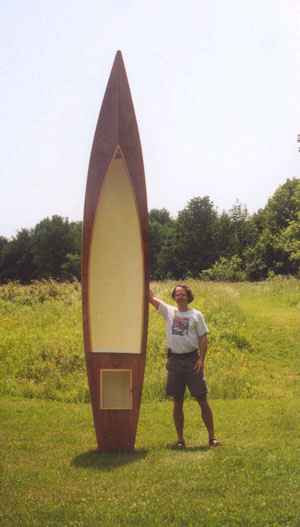