Ladybug is a lot like Woobo which was one of my first designs. There was a Woobo near here for a while. I never got to sail it but was told it would really fly. (That boat was made of Lauan plywood from Home Depot which fell to pieces after rainwater filled the boat over the winter.) Ladybug is a bit shorter and wider and deeper and has bench seating, much more suited for older legs. Both boats have a small motor well. The best motor for something like this is the 2hp Johnson/Evinrude which weighs 25 pounds. Even that is overkill since 1hp will push this hull at top speed, anything more just makes bigger waves. Here Sandra Leinweber pushes into a stiff breeze with a 2hp Honda. 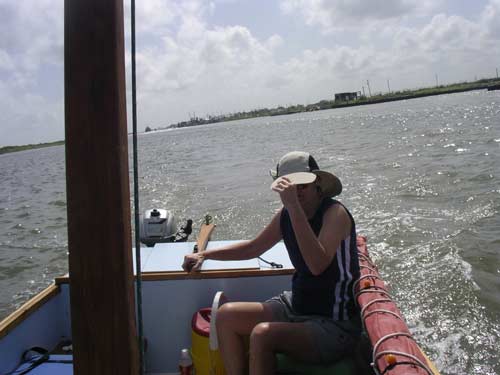 This shape of hull with multichines and a plumb bow seems to be a good all around thing with rough water abilities. I think if there is a problem it is that it has almost no lateral drag and unless the boat has a big skeg or keelson or something like a leeboard or daggerboard or centerboard it would just as soon go sideways as straight. I've given Ladybug a keelson and when using power you should keep the leeboard down just enough so its tip drags the water. 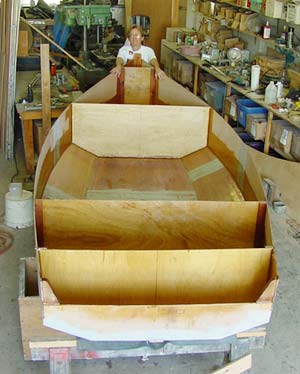 Ladybug's hull has the layout I like the best - a 6-1/2' cockpit between two storage/buoyancy boxes. It would be a great solo camping boat. The buoyant wooden spars prevent it from turning turtle. You bring it upright with weight on the lowered leeboard. Then you must climb back on board and a slot in the rudder seems to be the best boarding ladder around, bringing your weight back on board where it least affects the boat. You will have to bail some water.

I've kept the same sail as with Woobo, a 75 square foot balanced lugsail. It hoists on a 13' mast with 11' yand and boom. All very low tech built with common materials.

Chuck Leinweber of Duckworksmagazine built the prototype and brought it to our Rend Lake messabout so I had a chance to go for a long ride in it. One thing that impressed me was how large it was for a 14' boat. In the opening photo you see it sail with three men on board, all comfortably sitting to windward on the bench seat, and I'm told it has sailed with four men with no effort. I do think it would be quite suitable for a family of four say with lots of room for all and storage space for all their junk. Here Sandra Leinweber sets things up at a recent campout on the Texas coast: 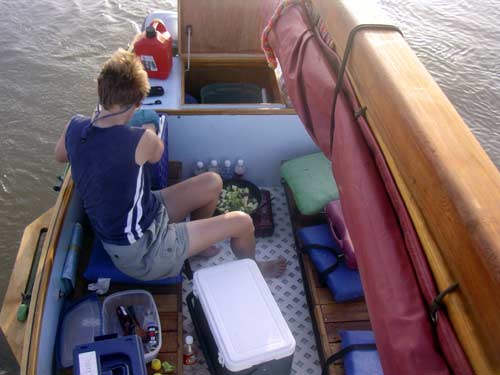 Chuck has modified the bench seats so that his expand towards the center and meet in the center thus making a 6' x 5' sleeping platform. 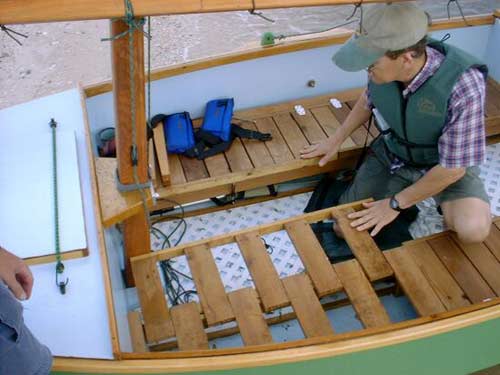 Here is the boat from a distance with the mast folded to support a tent. Turns out a small commercial camping tent can be set up on that platform and that is what they are using. 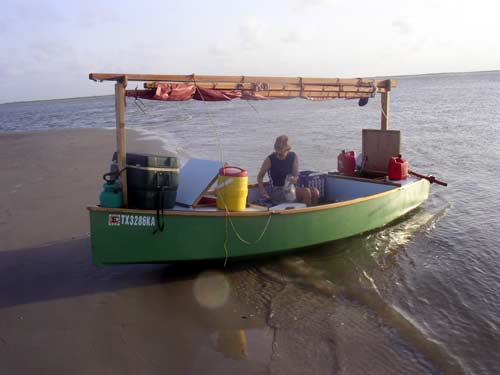 Just got back from a day sailing my Ladybug & I'm sunburnt & pretty buggered.

After losing nearly 1 1/2 hours, while rigging at the boat ramp, talking with two separate older fellows who were quite taken with the boat & expressed their interest in maybe building a boat(they know about Duckworks now of course!) I finally launched into a fading 8-10kt NW breeze.Sailed then motor sailed as the breeze died,then did some fiddling with the lazy jack rig & a few other bits till the expected NE sea breeze came in....& as usual,it developed quickly to about 15-20kts & gave me a fast & wet (yes Ladybug is wet at speed in a blow as you well know) ride for an hour back to my launch site.... great stuff!She really is docile & could probably be sailed ok with a bigger sail without too much grief.
Al 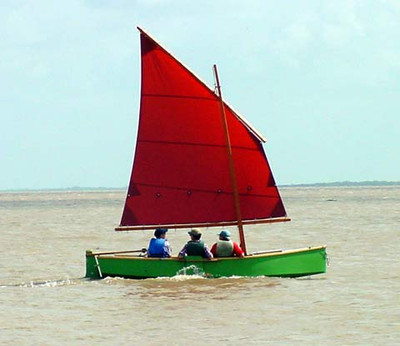