This is Jewelbox Junior, a 15' version of the original 19' Jewelbox built a while back by Karl James in Texas. That Jewelbox went all over the US and parts of Canada and I understand was sold a few years ago to someone in Florida and replaced by a larger sharpie that Karl had designed. Here is a photo of the original Jewelbox. 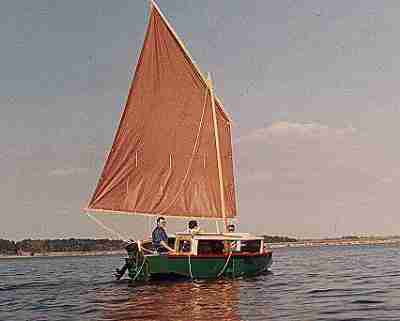 JB Jr is also narrower than the original boat, the bottom now planked with just two sheets of 1/2" plywood. Perhaps a good comparison of the two boats would be that Jewelbox needs 16 sheets of plywood and JB Jr needs 9. In particular I hope that JB Jr could be towed behind a small car. Two protoypes of JB Jr were completed last fall. One by Vern Stevens in Idaho and the other by Erwin Roux in Pennsylvania. Vern had a chance to take this photo before winter hit: 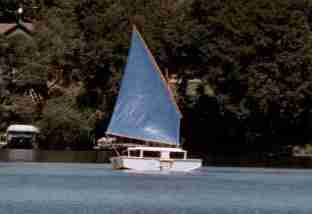 And Erwin sent quite a few great photos taken on a beautiful autumn day. 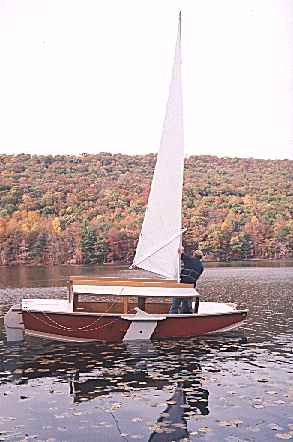 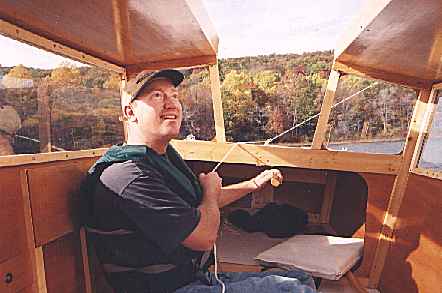 The crew weight thus acts like ballast. The boat becomes more stable with extra crew where a normal raised deck boat becomes less stable. I did some paper studies of the self-righting abilities of Junior. With it lighter bottom planking, Junior is bound to be less in that department than Jewelbox, which Karl says has righted from having its windows submerged. By my studies Junior should self right from up to 65 degrees of roll. Beyond that and she would roll another 15 degrees and become stable on her side. She won't flood due to her Birdwatcher cabin. If you couldn't rock the boat back upright you would have to exit, right the boat from the water by stepping on the leeboard, and climb back in. And you would need a reliable step to do that in any high sided boat. These are just paper studies. I would expect my IMB design to behave the same way. Larger heavier designs, like Jewelbox and Scram, should self-right from a full knockdown. More weight on the bottom, especially another layer of plywood there, would be a good investment if you could tow the extra weight. 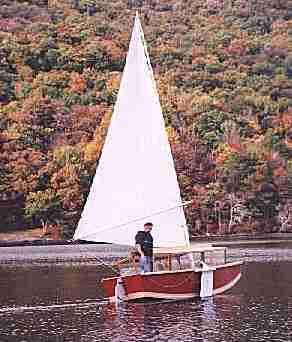 I've shown Junior with a sharpie sprit rig, although you could substitute a lug sail as Stevens did.

Simple nail and glue construction with no jigs or lofting. 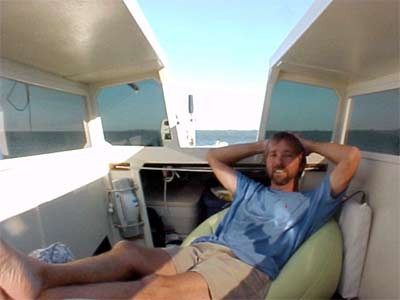