Imresboat is a slimmed up version of Larsboat which was designed for Lars Hasselgren to replace a Folboat that had finally met its end. Lars wanted capacity for two, plus decking, as with his old Folboat. But Imre wanted something more slender and lower in the same length. The result is 26" wide instead of 30" wide. And the result of that is that Imresboat is a single seater because the capacity has been reduced with the width. Imre wanted it even narrower but I hoped to stay within the tippyness bounds of most folks. Not sure yet how narrow something like this can get before the normal guy can't sit upright in it. I do know that you apparently can get used to about anything in that respect as experienced kayakers do.

The deck opening is smaller to sit just one man but I think it is longer than the usual kayak because us older folks have trouble fitting our legs through the hole in a performance kayak. Something like putting on a pair of pants without standing up.

(Here is a photo of Paul Moffitt's Larsboat with two aboard.) 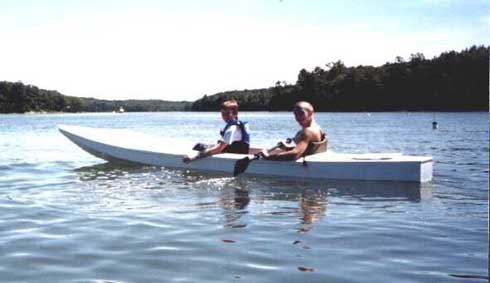 Another change I made with Imresboat is to go to thinner plywood to save weight. In this case I suggest 1/8" ply for everything except the bottom which is still 1/4". Not sure where the 1/8" plywood comes from but it used to be what they skinned doors with. Be sure to boil a sample and hope it is waterproof. Anyway, Chuck Leinweber brought a Toto to our messabout with 1/8" ply sides and 1/4" bottom and it struck me as being fine for stiffness and strength. Like Toto and Larsboat, Imresboat is taped seam construction. I'm guessing at the 50 pound weight but for example Larsboats built of 1/4" plywood have weighed between 60 and 80 pounds depending on who built them.

Well, Chuck Leinweber also built the prototype Imresboat. He has used it for a while now and wrote this essay and sent these photos:

"I guess after three major expeditions with Imresboat, I should give you a report. The trips were: The Colorado Canyon just upstream of Big Bend National Park, a week long, 50 mile sojourn with Jim Thayer's Kokopelli group on Lake Powell, and finally an 80 mile paddle on the Rio Grande with my friend Skip Johnson - from Santa Elena Canyon on the west end of Big Bend National Park to Boquillas Canyon on the east. 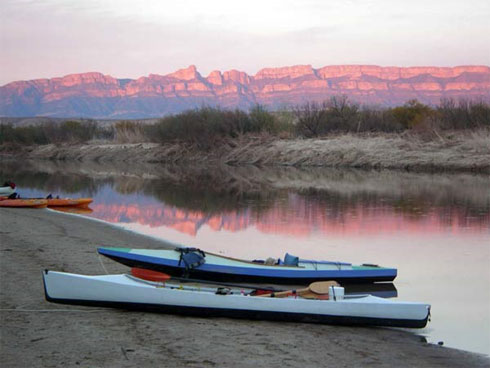 The 80 mile Rio Grande trip was magnificent! Imresboat made it possible. Here the Sierra Del Carmen mountains in Old Mexico glow in the sunset. Skip Johnson's boat is in the foreground-more about that later.

I had some nice marine plywood ready to build the boat with (I still have it) but chickened out at the last minute when I found some nice Luan at Home Depot for 12 bucks a sheet. I built the boat with that and put a layer of 6 oz fiberglass cloth on the bottom and added a couple of layers of epoxy/graphite over that. I can't say enough about the graphite - I now use it on the bottoms of all my boats. It does a great job of deflecting rocks so that you mostly avoid gouges. Sharp objects like Oyster shells seem to skitter off the bottom leaving only superficial scratches. You do need to renew the stuff every so often as it is essentially sacrificial. 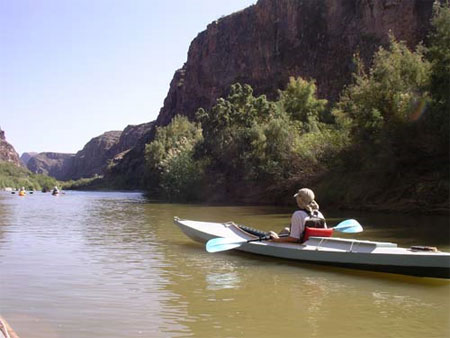 Sandra on our first Rio Grande trip. There were a lot of rapids on this one and she punched a hole in the starboard bilge panel and turned the boat over one time. It was a great trip!

I tend to like sailing, but Sandra really prefers paddling. That is Ok with me as I like paddling too. We have a couple of sailboats but in the past few years, we have begun to paddle local rivers here in Texas. Several years ago we built a Toto and it is a great boat but has a few shortcomings. For one thing, you have to sit about 16 inches ahead of the aft cockpit bulkhead. I assume it is back there to enable sleeping in the boat, but we never do that anyway. Also, as drawn, Toto has no deck forward which is a shortcoming if you are paddling down rivers. So I started looking at Imresboat as a substitute. What I found is that this boat, while great in other ways is a little too long for river running. But it is good for other things. 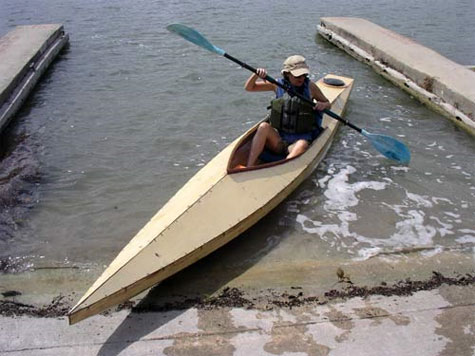 We were so unsure about the design that we took it to a local lake as soon as it would float. We were delighted to find that even with no gear at all, the boat, although initially a bit tiddley, hardened up once it leaned a bit and was not a problem to get used to. Also it proved to be very fast and easy to paddle!

Imresboat is a fast boat with a huge capacity for load carrying. On the most recent Rio Grande trip, I carried all my camping gear, as well as food and water for a week, I am not sure what it weighed but it had to be in the neighborhood of 150 pounds (the water was half of that). Add me and you are up to 300 easy and the boat handled it just fine. Well, not quite. What I found was that once the upper chine was under water, the boat tended to be hard nosed at speeds over 4 mph. What happened is that it would head off slightly to one side or the other and be very difficult to correct. At the beginning of the trip, I was loaded, but as I ate the food and drank the water, the boat floated higher and higher - and handled better and better. 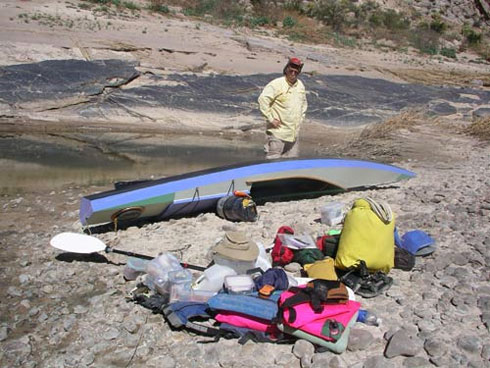 Can you believe all this gear came out of that boat? Skip surveys all the camping stuff that came out of the bowels of my Imresboat so we could pull it onto the sandbar for field repairs in Mariscal Canyon.

Since it is a wood boat and since the Rio Grande was a bit low, I had to stop quite often in shallow water to avoid punching holes in the boat (I did get one leak and had to make a field repair). Then I had to paddle hard to catch up with the rest of the plastic boats which were able to bounce over the rocks with impunity. That was doubly hard as it would head off in one direction or the other once I got over a certain speed. But as I got used to the rocks, I was able to make the boat slow down enough that the bumps were not hard enough to cause damage. Thank goodness it is a wood boat as the one tiny crack I did get was easily fixed with a bit of epoxy and fiberglass right in the middle of Mariscal Canyon. 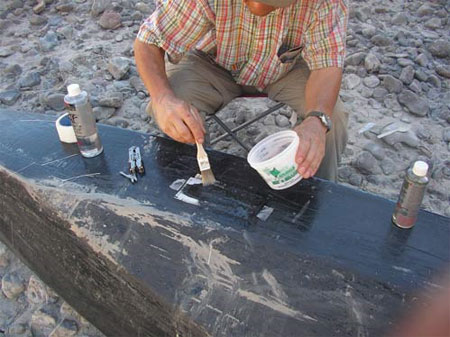 We pulled the boat up on the gravel bar we camped on that night and did a field repair. Nothing to it.

Really, though, Imresboat is not the best choice for a white water river trip - not the Rio Grande, anyway. It was perfect for Lake Powell, but for the River, a shorter version would be better - something more maneuverable. In any case, the next one we build will have a layer of Kevlar on the inside of the boat and heavier fiberglass on the outside. This was what my friend Skip Johnson did on his canoe (see photo above) and he was able to bang over the rocks just like the rotomolded boats that some of our fellow travelers paddled. 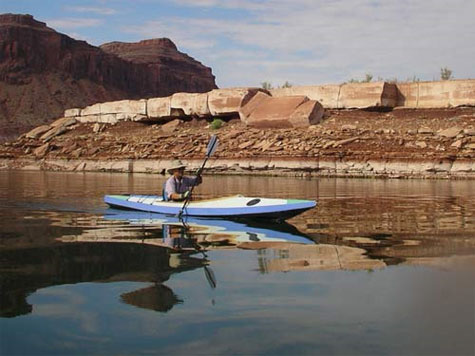 Sandra took this picture on Lake Powell. It was a calm morning of our last day on the lake. You can see that the boat is down almost to the second chine, but this only made the boat more stable and did not hurt the performance. At the start of the 80 mile Rio Grande Trip, this chine was just under water and that made all the difference.

In summation, we are delighted with Imresboat. It is an easy to build, potentially cheap, fast touring boat with room for lots of gear. I think it could be modified for a spray skirt if you wanted to get into that kind of touring. It is not unstable at all compared to other double paddle boats and the stability increases dramatically as gear is added - In my opinion, cruising is where Imresboat really shines. Our plan is to build another one of these for cruising and then build a couple of shorter boats for river trips. Thanks Jim for designing such a great boat!"

...And many thanks to Chuck for doing the prototype!

Taped seam construction from four sheets of 1/8" plywood and one sheet of 1/4" plywood. 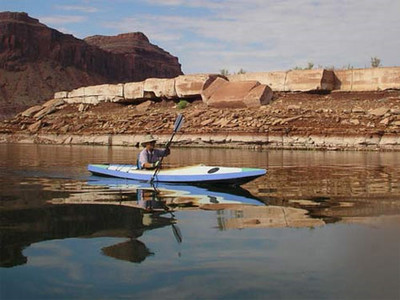