IMB features a "Birdwatcher" cabin, full length with panoramic windows and a center walkway slot in the roof. Everyone rides inside. This style of boat was invented by Phil Bolger in the early 1980's. 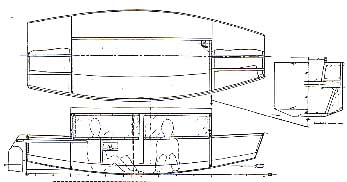 These boats can be self righting with minimal, or no, ballast because crew weight works as ballast. They sit low looking out through the windows (although standing in normal winds is quite acceptable). The cabin sides provide lots of buoyancy up high to ensure a good range of stability. IMB, which is small with a light bottom, should reliably self right from 60 or 70 degrees and in the test described above self righted from a full 90 degrees of roll.

These boats are operated from within the cabin, like an automobile. No one need ever go on deck. For boating with children I can see no equal.

These are usually cool inside. The tinted windows cut the sun's power. The crew can sit in the shade of the deck. Downdraft from the sail cascades through the walkway. (By the way, at the Conroe messabout two boaters with Lexan windows noted that mosquito spray will ruin Lexan with one application and they noted belatedly that the back of the spray can says so.)

IMB has an 8' long cabin on a multichine pram hull. The prototype was built to perfection by Gerry Scott of Cleveland, Texas. At the Conroe (Houston) messabout I got a chance to look over his boat plus the only other IMB I know of built by Bob Williams. Both boats were quite true to the plans. Both had added low inside seats which made them more pleasant to use to the point that I will show some seats on the plans. I was worried when I drew IMB that the headroom would be minimal so drew no seats thinking the crew would sit on the floor, as with the original Birdwatcher. 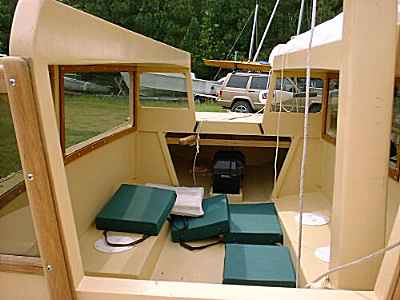 While I was sailing with Gerry, Bob's boat came out on the lake with four adult males and no sign of bogging down, showing that these fat pram shapes, very much like my Piccup Pram, can handle a lot of weight in the 13.5' length. Here are three of the pirates plus another who was taking the picture. 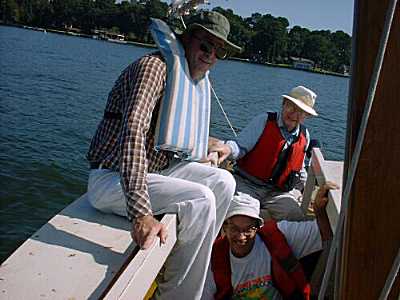 Later they took on a mermaid and returned to the dock with five. 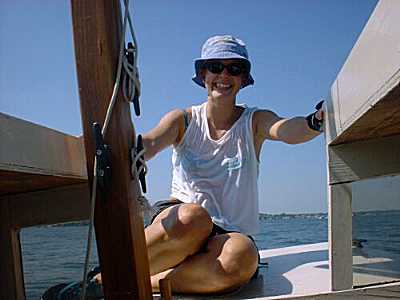 I don't know if either boat had ever been weighed and the 350 pounds I quote as the empty weight is just a guess. One of the ideas behind the boat was that it might be towed behind a compact car and I was glad to see that Gerry tows his behind a 1500cc mini SUV.

Both men adjust well to the lug sail/leeboard rig. Gerry's has the blueprint 104 square foot sail and Bob's uses the 114 square foot Bolger Windsprint sail available from Payson. I used to worry a bit about running a leeboard on a full cabin boat like this since handling must be done by remote control, so to speak. No problem. Both boats have the leeboard lanyard running to a cleat on the aft deck. The leeboard position is plainly in view at all times through the cabin window. In use these leeboards need only lanyards to pull them down. Once down they will usually stay down until they strike something. Then they pop up and you will need to pull them down again. I've never seen a need for a lanyard to pull the board up although I've seen several rigged that way. The Dovekie design had elaborate cam operated levers in the cabin that operated the leeboards and I thought that all very clever. But in talking to some Dovekie owners I found the internal levers are not universally loved since they can often be in the way. Anyway, my idea was not to run the down lanyard to the aft deck but rather through a small hole in the side of the boat, say 1/2" for a 1/4" lanyard, so it could be operated totally from inside the cabin.

Both Gerry's and Bob's boats used electric trolling motors. The plans show rowing ports and no provisions for a motor. A boat like this won't be a fast row boat but it might be useful in a calm. Even the 24' Birdwatcher would row about 2.5mph in a calm. But I'll admit that adding a motor to Birdwatcher makes it a much more useful thing.

IMB takes two sheets of 1/2" plywood, eight sheets of 1/4" plywood and one sheet of 3/16" Plexiglass. Taped seam construction using no jigs or lofting. 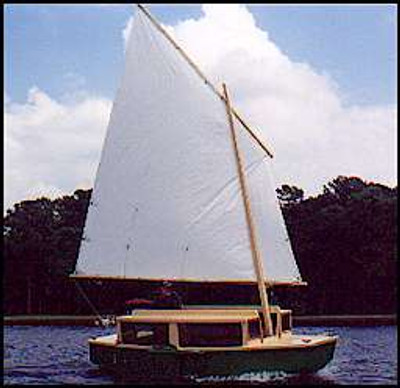