Harmonica is a tiny shanty boat that sleeps two in its cabin. There is a porch up front suitable for lounging and a small room in the stern for the kitchen and the water closet. I think it is arranged so that two people could wait out an all day soaker without feeling too pressed. For protected waters only. I've been asked more that once if Harmonica would be OK in the Ohio River, etc.. My answer is no. In calm weather you might get away with it but you always run the risk of huge wakes, especially from large motor yachts. The prototype Harmonica was built by Chris Crandall of Lawrence, Kansas. 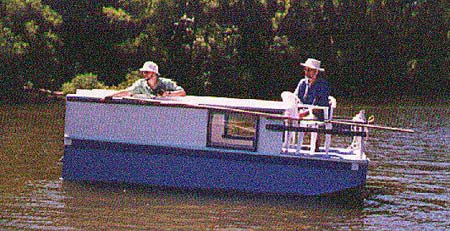 This boat was originally called Fusebox. It was intended to be an electric boat for the wonderful little conservation lakes we have around here. But later I thought that the electric scheme was strained because few trolling motors could push this box on a windy day. And because I noticed that none of the local conservation lakes have electric plugs at the docks, so recharging the batteries there would not be possible. Putting a gallon of fuel on board is a lot easier than taking an 80 pound battery home. Chris used a 1 horse Tanaka and that was about the minimum required, pushing the boat at 2 or 3 mph. At the same time I would say that 5 hp would be a reasonable maximum. You don't need much power or speed because you never can go more than a mile in any direction in the lakes I'm thinking of.

I also heard from John Applewhite, of Gainesville, Fl., who built the Harmonica shown in the photo at the top of the page. He had quite a bit of shantyboat experience and also some electric experience. He used a 3 hp Minnkota and two golf cart batteries, probably about 200 pounds of gear. John said this electric is used nearly all the time with great satisfaction but he also has a small gas outboard on the transom as a backup. 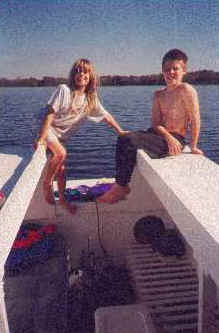 John also wrote, "...The entire family (two adults and two children) has spent the night on Steel Will. I put 1x2's between the slats in the two forward bunks and created a single bunk that is five feet wide. We have found that the thick cushions sold to cover lawn furniture very adequate mattresses for boats." 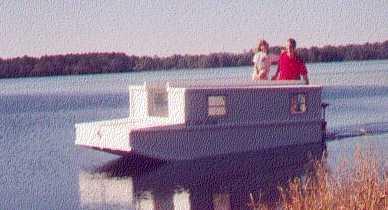 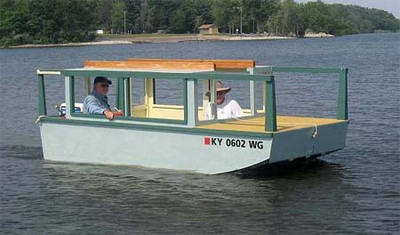