Fatcat2 is still really a prototype boat even though I can show photos of a completed boat. What happened is that the builder, who is in his mid 80's, was taking the prototype to the lake to test when it was damaged in a road accident. It's been repaired but the boat is near Green Bay and it will be next summer before any testing can be done.

Fatcat2 is a cuddy cabin sailer patterned somewhat after a traditional catboat. She's the widest boat I've ever done, proportionally speaking, but lots of boat have been built to these proportions and my my Piccup Pram, which is almost similarly wide, certainly has no difficulties in rough going. The multichine bilges make a big difference and I wouldn't try a serious boat like this with a totally flat bottom. This boat has a short wide cockpit with benches that should be comfy for three adults. The cabin will be nice for a solo camp or a hide-out for two. 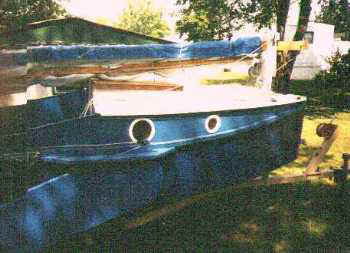 The mast is about the same length as the hull and steps in a tabernacle, both features should make for quick rigging. With a crutch or gallows to hold the struck rig you should be able to fold it all down without unhooking all those lines that a gaffer needs. I've seen it done on a Mudhen and it looks like Walter has rigged his Fatcat2 that way. If you look hard at the tabenacle in the photos you might make out that Walter also has rigged a winch to pull the mast up. 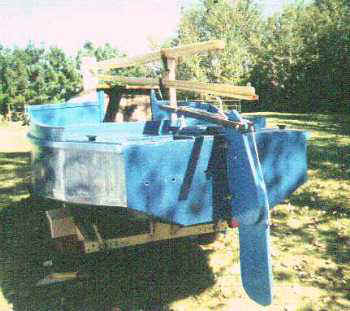 This boat is not ballasted. I did some paper studies of its stability which backed up my experiences in boat like this. They are usually most stable at about 20 degrees of heel, which might be the most heel you should sail at normally. Beyond that point the righting moment decreases until it reaches zero at about 50 degrees of heel and she'll go over. I'd expect her to lay high on her side because the rig is buoyant. Most likely you will have to parbuckle her upright with a rope if the leeboard is on the high side of the knocked down boat and out of your reach. I'd expect a rope or transom step will be needed to reboard the boat. The cockpit will take on a small amount of water but I'll bet she'll sail with it. A bucket is the only way to clear that sort of water, those pretty hand pumps being about useless. (Making Fatcat2 self righting in the usual way would mean making the belly twice as deep to float about 400 pounds of ballast, then add a self draining raised cockpit. A very different boat that some might prefer.)

Fatcat2 is built with taped seams and no jigs or lofting required. The plywood bill looks like four sheets of 1/4" plywood, fours sheets of 1/2", and two sheets of 3/4" plywood for a thick bottom.

Mike Sandell showed up at the 2009 Rend Lake Messabout with what I guess we can call the prototype Fatcat2. Here he is... 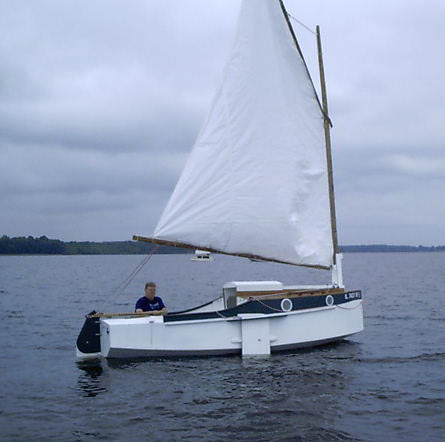 "I had the first launch of my Fatcat2, named the "Julia L." during the 19th Annual Midwest Messabout at Rend lake in Southern Illinois. This is the sailing report.

The "Julia L." sails very smoothly (at least in calm conditions). Tacking or jiibing was very brisk, and even in light winds I could come about in about five seconds. It was difficult to determine how close-hauled she could sail, as once again the winds were very light and variable. There was little tendency to heel in the light wind conditions that existed. 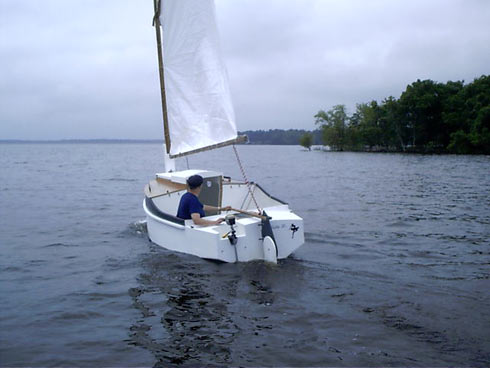 The polytarp sail was smooth, and required only a bit of tuning to hold a near-perfect shape. Handling the rigging was typical for a gaff-rigged boat, meaning more complicated than a balanced lug, but only during the initial tuning process. Lazy jacks were added the second day to keep the sail out of the cockpit.

Visibility over the cabin was restricted a bit by the raised cabin hatch, but this only blocks the view to 11 oâclock or 1 oâclock, depending upon which tack you are on. Because of the slightly raised bench seats I built, visibility straight forward from either side of the boat is fine.

The cockpit is so comfy that on one occasion I nearly fell asleep at the helm! She does have a wee bit of lee helm, but I think that adjusting the slot in the leeboard guard to allow a more vertical position for the board may cure this. Anyhow, I need to test her out in a wider variety of wind conditions to have a good feel for that aspect of her sailing qualities.

Some moderately brisk winds came up briefly on Sunday morning, and the boat seemed quite speedy in those conditions, although without a GPS I could not measure the speed. I do remember that on Saturday I was slower than the Family Skiff that was out on the lake, but a bit quicker than the Philsboat.

Construction of the "Julia L." took me a lot longer than it should have- nearly eighteen months. I really should have had the boat completed in time for the 2008 sailing season, but extended business trips and other commitments kept me from the project for long periods of time.

The boat is constructed of Â¾" MDO on the bottom, Â½" MDO on the bilge panels, foredeck and afterdeck, and Â¼" " okume for the sides. Typical home improvement store lumber was used for the framing and rigging. Most of the hardware was purchased from Duckworks, with some coming from the local hardware store.

Assembly was typical stitch and tape, and the bottom of the boat also is armored with a full layer of 6 oz. fiberglass cloth and resin. Paint was a latex acrylic porch paint purchased at Ace Hardware, and the running rigging is all rope purchased at Menards, another home improvement store."

Another great job, Mike, and thanks much!

NOW, I gotta tell you that I sailed a bit with Mike and the boat struck me as being light with a really big sail, so don't skimp on the reef points! 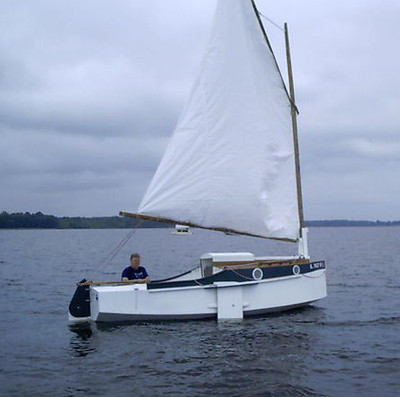