Electron was an interesting project done for a man who had done his homework on electric boats. In particular he had studied Doug Little's great book ELECTRIC BOATS. He wanted a cuddy cabin boat capable of some cruising, the ability to go about 30 miles on batteries when desired.

We started with my old Fatcat2 design, stretched it to 18' and narrowed it to 5', which made it visually a lot sleeker. He told me right off the bat that his figures showed he would need six trolling motor batteries to get the desired range while using a 24 volt, 2hp Minnkota trolling motor at half throttle.

To guess at performance you first guess at the total weight. The batteries will weigh about 400 pounds total and the motor about 60 pounds. With wires and such the power system should go about 500 pounds. The hull structure is guessed at 400 pounds, so the total empty weight might be 900 pounds. Let's add 400 pounds for the skipper and guest and some gear. The total comes to 1300 pounds in this set up.

Next we guess at the waterline length. Let's say 17' for this 18' boat with plumb stem and stern.

Another check to make is Little's rule of not drawing more than 20% of the power per hour. So a 2 hp motor (1500 watts) needs at least 7500 watt-hours total and the battery bank shown is about minimum.

One might ask about putting a gas motor on Electron. I'm quite sure it will not plane under control in the usual safe sense. So there is little point in using over about 4 hp. A modern 4 cycle engine of that power will run for ever on a little bit of gas, and even a junker 2 cycle that size will burn about a gallon every three hours or so. A tiller extension is mandatory for proper trim, very easily done. For that matter the electric will need a tiller extension or remote steering for proper trim.

I think this hull would be a good starting point for a sail boat. The lines are right. You will have to rethink the cockpit, trying to make it more watertight. There is a great temptation to use the batteries for ballast but I'm not so sure this boat is a good candidate for a self-righting design because it's side and cabin are low. There might be a compromise where maybe two batteries are used, keeping the battery compartment small and yet with enough endurance for 8 miles or so in calm conditions. The weight of the two batteries might steady the boat but it would not be self righting. The hull would easily take a 100 square foot balanced lug sail and leeboard.

Electron is built from eight sheets of 3/8" plywood and three sheets of 1/2" plywood, using taped seams and jigless construction requiring no lofting. 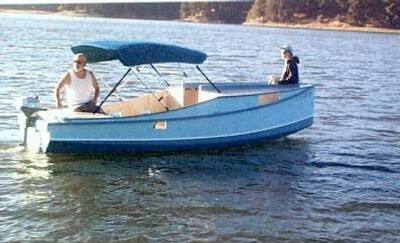