Cormorant is the largest boat I've ever designed. I always warn folks to think twice and three times before building a big boat because you can buy a good used glass boat for less, maybe a lot less. But a homebuilt boat can have features that aren't available in a production boat and so it is with Cormorant. This one is really a 20% enlargement of Caprice.

Straight enlargements rarely work perfectly and so it was with Cormarant from Caprice. (Don't forget that Caprice was an enlargement of Frolic2, etc., etc., right on down to my Toto canoe.) In this case I narrowed it from a straight enlargement to keep the width within simple towing limits since this large boat is supposed to live on its trailer most of the time. The layout is quite similar. The idea is that the adults sleep in the center cabin and the kids sleep in the forward room.

Like Caprice, Cormorant has water ballast, over 1000 pounds of it. Total floating weight with family is going to be up to 4500 pounds. You don't tow a boat this large behind a compact car but I think towing this sort of weight is common today, all done with expensive large trucks I'm afraid.

The sail rig looks pretty modest with a 207 sq foot main. I'll bet it is enought since this shape is easily driven. I don't think you can go any larger and still hope to handle it without extra crew and gear.Tthe lug sail shown is similar in size to Bolger sharpies and they seem to get by OK. Experience will show if it is too big/too little.

Constuction is taped seam, with no jigs or lofting. Unlike smaller designs this one does not come with a plywood panel layout drawing. Over the years I've learned two things about the ply layout page. First is that almost no one uses it. Second is that with a larger boat the work of finding and drawing and fitting all the pieces to the boat on scale plywood sheets overwhelms all the other work. So part of the deal with doing the design was that there would be no plywood layout drawing. However this is still a true "instant boat" in that all of the parts that define the boat are drawn in detail and you can scale them up on plywood, cut it out and fasten together with no need for lofting or a building form.

Garth Battista, who is a book publisher at Breakaway Books where he publishes sporting books including my Boatbuilding For Beginners (And Beyond), is a true boat nut and has worked himself up from dinghies and canoes to the big Cormorant. He took it initially on a quick shakedown run on a lake near his home and shortly later to Long Island Sound for a week with his family. Here are his comments: 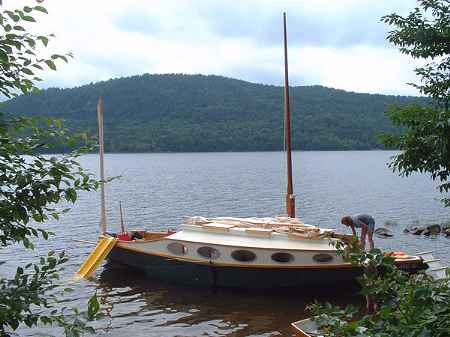 "We had an amazing time living aboard Cormorant (christened "Sea Fever") in Provincetown harbor for 5 days. The tide there was rising and falling about 12 feet a day with the full moon. We'd be high and dry up on the beach for breakfast, swimming off the boat at lunchtime, walking the flats again by dinner. It was a blissful time for me and my wife and two girls. We moved around, took little sails here and there across the harbor (West End to Long Point, then to the lighthouse, then to the East End, etc.) anchoring here and there, usually just running it aground as the tide allowed and staying for a while. Many shells were collected, and tidal pools investigated. Of all the harbors I've ever seen, it is the most alive. It's a couple of miles across and fresh sea water flushes the whole place twice a day. The number of snails, clams, crabs, fish of all sizes, mussels, eelgrass, etc. was just mind-boggling. On high tides I'd go spearfishing (many attempts, no luck) where at low tide I'd been walking around. 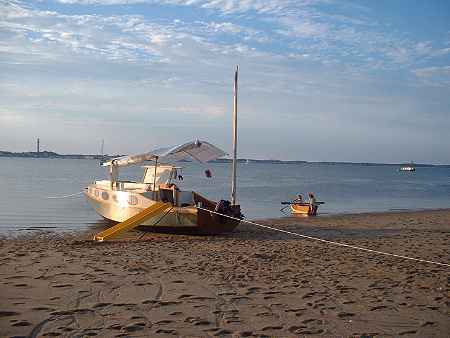 We rigged a 8' x 15' white tarp with tent poles running crosswise as a canopy over our cockpit and hatch, supported along the mast folded down in the tabernacle, so we could escape the mid-day sun. Most days were hot and humid and mild, with only gentle winds. We rode out a nighttime thunderstorm with no trouble, just stayed up and watched the lightning. We attended a few wedding-related events, just walking ashore for one party, and for the wedding itself we returned late at night and rowed our dinghy out to the boat, our sleepy children just awake enough to get themselves aboard. 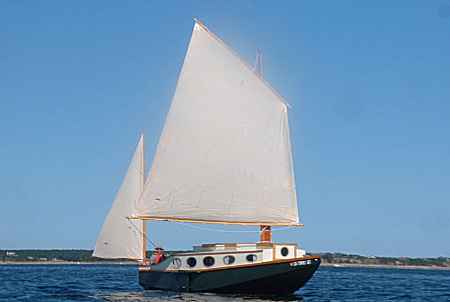 For our last two days we gave up the shallow-water life and sailed from P-town down to Wellfleet, about 7 miles, surfing along on gentle 3-foot waves with a following wind. We beached the boat at Great Island, walked the beach, had a picnic dinner, swam and played, spent the night, and left the next morning at 6 a.m. to beat the falling tide. Our weather radio mysteriously quit working that morning, so all we had was the prior day's forecast of 10-15 knot winds from the SW. 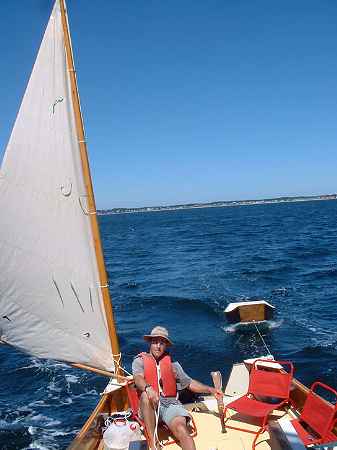 The wind had shifted into the west during the night, so we had to beat out of the harbor, and once we turned north to return to Provincetown, huge rollers were coming in off the bay, more or less directly into our port side, lifting us, rolling us, occasionally breaking and spraying water into the boat. We stayed well offshore to avoid the breakers in by the beach -- but with the falling tide it seemed that we needed to be nearly a mile out. It went from exhilarating to worrisome to mildly terrifying as we neared P-town and the wind kept picking up, past 20 knots to 25 and higher in gusts, and the waves just kept growing. The swells were in the 8-10 foot range, with a high percentage of them breaking at their tops, whitecaps everywhere.

But bless this boat! With its 1000 lbs. of water ballast, and the leeboard mostly up, we were able to bob and roll and slide over nearly all the swells. The worst of them were very steep and threw us sideways, maybe tilting us to 40 or 45 degrees briefly. We had two reefs in the main and the mizzen rolled down to about half-size, and still we blasted along on this nasty rollercoaster of a beam reach. It was the sort of trip that would be scary fun if it was just you and a buddy, but it's awful when you have your loved ones aboard, and you wonder who might get thrown overboard, and how you'd managed a rescue in the rough conditions. 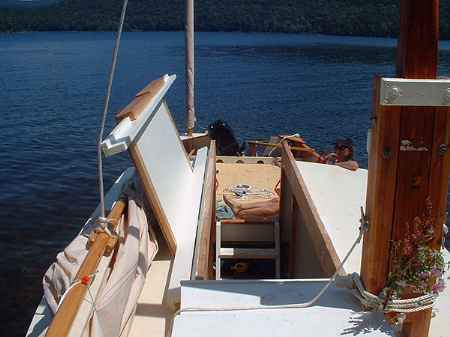 Anyway -- the white knuckles got to relax as we finally made it past the P-town breakwater, and with great relief ran her aground out on the flats. The gale (or near-gale) continued to blow all day, kicking up 3 and 4-foot waves even in the protected areas of the harbor. The only boats we saw going out were an 80-foot schooner and a big whale-watch boat. A lobsterman we talked to later said he'd stayed in as it was too rough to check his traps.

We had a hell of a time taking the boat out and getting her on her trailer for the trip home -- but all worked out in the end, with the assistance of some very kind strangers; and I'm left with the memories of incredibly happy days. -- And an incredible boat. 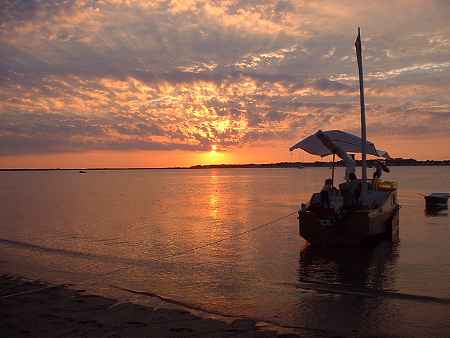 P.S. Jim -- I should also mention that on Sunday afternoon as we turned the corner from our run down to Wellfleet to the close reach upwind toward the inner harbor, the boat just drove perfectly. It seemed we made 40 degrees off the wind. That maybe wishful thinking, but it was an angle far better than I'd imagined a lugsail could manage. It was a joy to sail, in all conditions. My hat is off to you.

P.P.S. The number of people who came over to admire the boat and exclaim at its uniqueness, its coolness, its obvious functionality -- well, they were beyond count. " 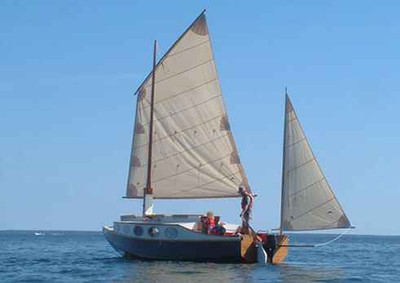