About 15 years ago I built a Payson Canoe and used it for several years before selling it. I replaced it about 10 years ago with my Toto double paddle canoe. Toto has the same multichine cross section as the Payson Canoe but I tried for a long lean bow which would be better in rough water and more forgiving of bow down trim. I still have that Toto, unchanged in any way since new, and still use it all summer. 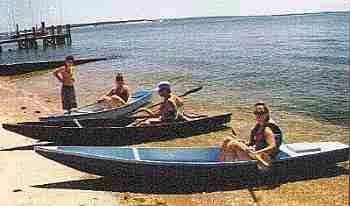 The Toto shape worked so well that I used it in other designs like Roar2 and RB42. I tried it also in a sailing boat, the 20' Frolic2 (the original Frolic was narrower, more of a rowboat than a sailboat). Frolic2 was unballasted with a small cuddy and I hoped it would be a good daysailer and one man camping boat. Two were built that I know of. They both went well but the design wasn't popular enough to stay in my paper catalog, although plans are still available. 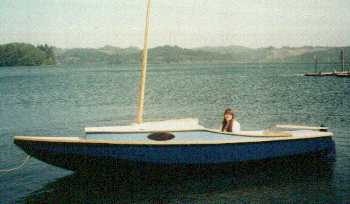 Bill Moffitt had built my Woobo design and funded a 20% enlargement of Frolic2 that would have a cabin, water ballast, and a yawl rig for cruising near the Gulf Coast.

The 20% enlargement idea went very well except that I had to deepen the hull more than that to give some serious headroom in the cabin, but it doesn't have standing headroom. Great emphasis was placed on ease of use and rigging. The main mast is short and stepped in a tabernacle. There is a draining anchor well in the bow, a small storage segment under the front deck. The mast tabernacle is bolted to the bulkhead that forms the front of the sleeping cabin. There is a utility room aft of the sleeping room. Water ballast tanks are under the bunks and in the sides of the utility room floor, about 600 pounds of ballast as I recall. Aft of the cabin is the self draining raised cockpit with storage volume under the deck. Finally there is a self draining motor well across the stern. Construction is taped seam plywood. 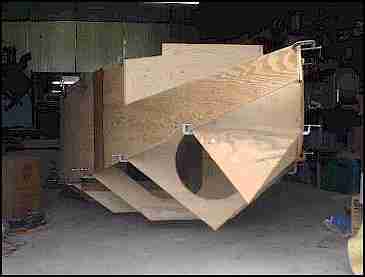 Bill couldn't start his Caprice right away but Chuck Leinweber of Duckworksmagazine gave it a try. He has the room and tools and smarts to tackle a project like this with no hesitation. There weren't many changes from the plans that I know of, the main one being adding a conventional footwell to the aft deck which is designed to have a hatch type of foot well as with the Bolger Micro.

Chuck trailered his Caprice up from Texas to our Midwest Messabout this June and I had a chance to go over it, sail it for a couple of hours, and watch it sail from other boats. Wonderful! 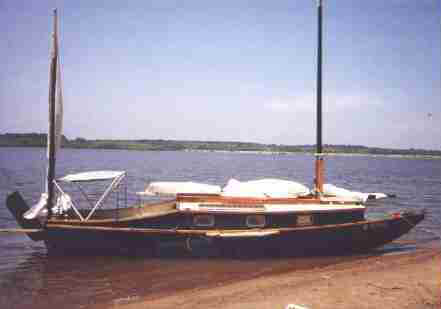 Chuck tells me it takes less than 15 minutes to rig the boat to as you see here. As shown the boat has its ballast so you see it beaches very well indeed. I asked about the ballast. He can flood the tanks without power, just open the access plate, reach in and pull the fill plug and let the water rush in. Since the tops of the tanks are about even with the normal waterline he has to move his weight around to keep the tank depressed long enough to completely fill. Then you reach into the filled tank, replace the plug in the bottom, and then replace the access plate in the top. There are two tanks to fill.

Are the ballast tanks worth the building effort? On a multichine hull like this the tops of the tanks form flats that give places for bunks and storage so that is good. When full the boat should have a very good range of stability. Chuck's boat has never been in rough going as I'm writing this so the effect of the ballast remains to be proven. It has been capsized in a practice but the ballast tanks were empty and the boat was empty with no crew, etc.. But the ballast is a success from the standpoint that Chuck is able to tow his Caprice behind a four cylinder pickup truck. My idea was to pull the boat up the ramp and drain the tanks afterward by simply pulling the drains plugs. But Chuck has found it best by far to empty the tanks before recovering the boat at the ramp. So he uses a bilge pump in each tank to pump them empty. I'd be worried about water ballast tanks on a wooden boat from a rot standpoint and would be careful to open all the plugs and access panels when the boat is stored.

I took this picture to point out three features of Chuck's boat. 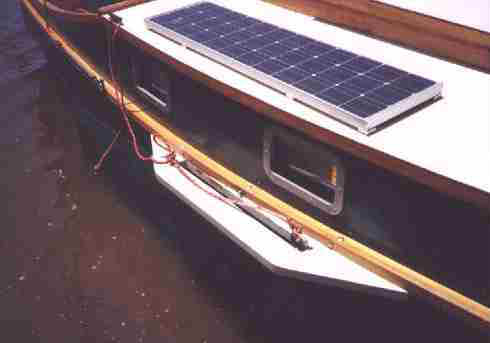 First, you can see here the upper leeboard guard. The guard braces the leeboard to take loads in both tacks and only one leeboard is used. The leeboard pivots on a bolt near the waterline. The leeboard is under the upper guard with a small eye protruding through the slot. A lanyard is tied to the eye so you can pull it down. Once down there leeboards like to stay down until they hit something, then they will pop up and you must pull them down again. Chuck's set up has a shock cord that will pull the board down and so it can rub the lake bottom but it will release when the leeboard meets a serious obstacle. allowing the leeboard to retract all the way.

Second, you can see Chuck's custom port window. He made patterns for the frames and had them cast at a foundry in aluminum. They have screens on the outside and a matching watertight frame hinged on the inside with lexan on the inside. You would have no idea they are homemade and you need to bug him about putting up the details on his Duckworksmagazine website.

Third, you see his solar array for charging the two 12V batteries he keeps under the aft deck. I think he said it puts out 50 watts, about 4 amps of charge to the batteries in good conditions. He says it is plenty to keep his batteries charged and he has needed no other charging. He has lights inside and out but also has a 120VAC inverter for powering conveniences like a shaver or food blender. All very civilized! 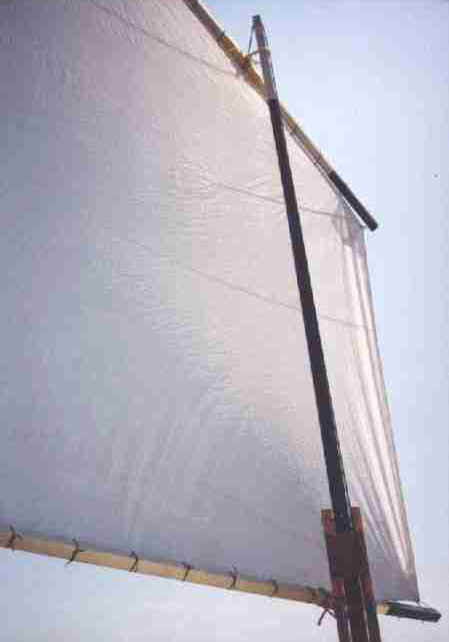 Caprice has the tabernacle setup that I first saw on Karl James' sharpie. The mainsail is 190 square feet, balanced lug. The mast is fairly short, stowing within the length of the boat when lowered. Chuck demonstrated putting up the mast, maybe a 15 second operation. I've been drawing these for a while on different boats but this is the first one I know of to get built and used. I'm greatly relieved that is all works so well. Before you decide to tack a tabernacle like this onto your boat, be advised that the tabernacle posts go clear to the hull bottom with big bolts all around a beefy bulkhead.

The sail you see is polytarp made from one of David Grey's Polysail kits. It was made by Sandra Leinweber who has written an essay about the subject posted at Duckworksmagazine. It is a blend of Grey's technology in that it uses a rope around its edge with taped edges. The tapes are sewn down as Grey advises (don't trust the adhesive very long). But it has the radial shaping darts that I've been touting. Chuck figured out the dart size using the essay I wrote about the subject a while ago. You can see the small dart near the sail's throat. There is a much larger one near the tack. The darts are sewn in place.

Normally I don't advise polytarp sails for boats that weigh more than about 500 pounds loaded and Caprice is way heavier than that. It will be interesting to see how it holds up! As for the shape, Chuck told me it sets perfectly no matter what he does to it. 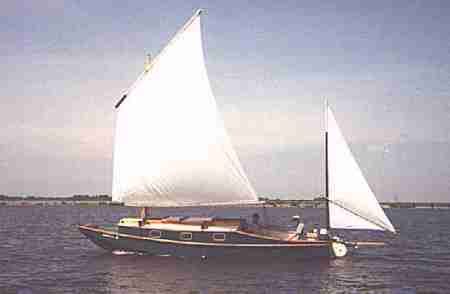 I thought Caprice sailed very well in the light winds we had that weekend. Tacked very smoothly through 90 to 100 degrees which is all you can ever get with a low tech rig. Very smooth and quiet compared to the sharpies I'm used to. It didn't seem at all sensitive to fore-aft trim. In the light winds it went 5 knots on the GPS which is certainly fast for the conditions.

Well, all in all I thought Caprice was everything I was hoping for. 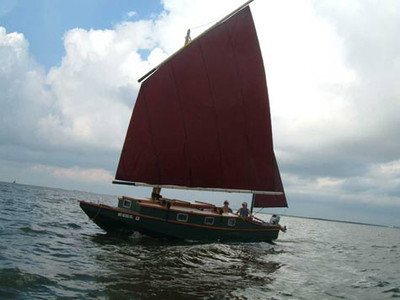