Campjon is based on my Jonsboat design. I increased the hull depth to 24" from 18" and again to 30" in the region of the 6' long cuddy cabin. The cabin decks slope upward towards the center so the "headroom" in the middle is about 3', usually that is enough to allow sitting up while seated on the floor. There is a slotted walkway on the cabin centerline just like I've used on my AF sharpies, but this one also has a step through to the front deck. The front deck itself is fairly large and easier to use as a boarding platform than with the AF sharpies. But it is very important to NEVER let anyone ride on a front deck like this when the boat is in motion. If they slip off the deck they have no option but to slide under the boat full length and through the prop in an instant.

The prototype Campjon was built by Luke Spreadborough in Queensland Australia. Here he is using a 2.5hp motor. 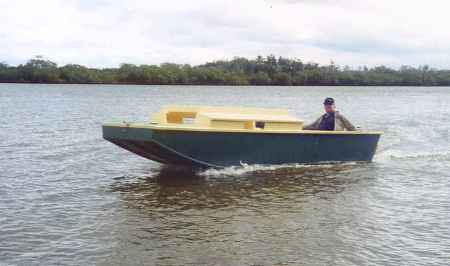 He now uses an Evinrude18 as shown in this newer photo and like the guru has become something of a collector of old motors and now they show up like orphans on his doorstep. 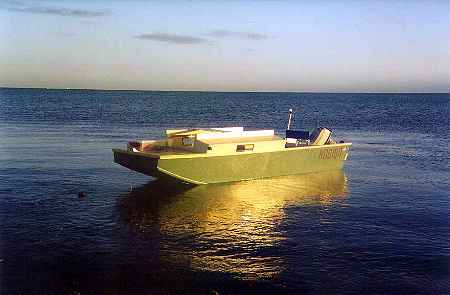 I doubt if the increased freeboard makes the boat any safer since a flat boat like this is not good in rough water in any case. The higher sides do give a feeling of greater security since this will be a boat you are "in" instead of "on". This would be a better family boat since the kids can be kept cornered in the cuddy while underway. They can stand in the slot, or look out the front or out the windows. I suspect the cuddy will find a lot more use as a spot for the portapotti than as a camping cabin. The cockpit as drawn has no seats and is itself a big playpen. For seating I suggest using common folding chairs like I have used with satisfaction on my AF4. When the boat is not underway the chairs are folded and stowed, or relocated to another part of the boat or the shore.

As for power I would suggest a good 15 hp motor or a 10hp to keep the capability of using the smaller lakes which are wisely limited to 10 hp. With 10hp and with two normal sized adults the boat should plane, and be very lively with one aboard. But I've noticed with my own AF4 that weight gets added as time goes by and I've noticed that folks usually build their boats heavier than I do. I should add that the Coast Guard has suggestions about powering small boats and they come down hard on flat bottomed hard chine boats like jonboats because of handling concerns. I think they would advise a max of 25 hp in a hull like this. (My AF4, which is about the same weight as Campjon, went 22mph with a 40 year old Johnson 18. Greg Rinaca's Jonsboat went 26mph with 18hp.) There is a draining motor well in the stern. 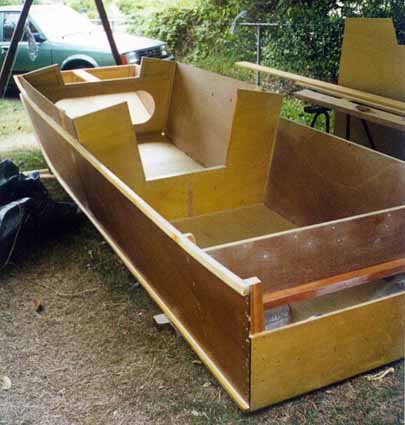 There are two more Campjons around that I know of. This one is by Adam Abrego in New York and has a raised cabin: 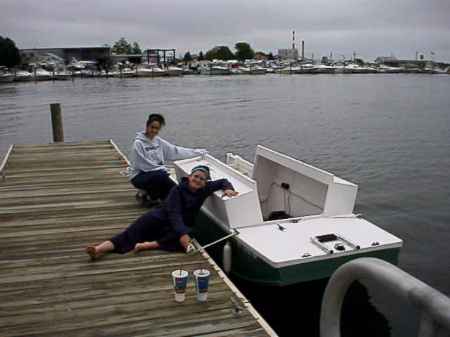 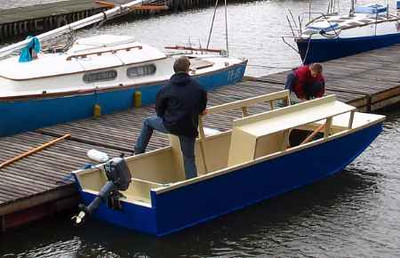