Bruce was looking for a large powered canoe but couldn't find one for sale. He said they still make them by hand in Maine but he was in California and you couldn't expect to buy one anyway unless you showed up with money in hand on the day the builder happened to finish one. So he wondered if the row/sail skiff Woobo couldn't be redone as a long lean powerboat. It's not the first time that has been mentioned. Ray Laviolette had the first plumb bow Roar, predecessor to Woobo, built up in Michigan for rowing and both he and his builder thought the shape could be modified for low power.

Brucesboat followed pretty quickly from that. I kept the plumb bow, easy to build and lots of folks like its looks. The multichine shape is very good in rough water. it's not as stable as a flattie of course but sometimes I think it is safer in that you must walk on the center of the boat because you can't step on the slanted bilge panels. Your weight is always close to centerline where it should be. I made the main cross section 6" wider than Woobo and a bit deeper. From the center aft the bottom is straight and flat. The sides could be that way too, but I pinch them in a little and sweep the sheer up in the stern a bit for looks. I gave it a skid/stiffener on centerline so she would stay put on the water. These multichine boats have little lateral resistance on their own and sometimes would just as soon go sideways as forwards.

I'm a big chicken on power and would keep this one at 10hp max. I think the main problem will simply be the weight of the motor, fuel and skipper in the stern. I've never designed a downward hook into the bottom to cope with bow wanting to go skyward, although some swear by that hook. The boat could be trimmed with wedges glued to the bottom stern if needed.

I kept Woobo's light taped seam construction and the plywood bill looks like three sheets of 1/4" and four sheets of 3/8". That's about 250 pounds of plywood and I would expect the finished boat to weigh about that much. The bow is boxed in with a storage/buoyancy chamber, the middle has a stout boxed thwart, and the stern is boxed in with a draining motor well. There are actually two places in the boat long and wide enough to lie down in. It might be a reasonable expedition boat given a small motor that burns little fuel and a canoeist skipper who is used to roughing it. 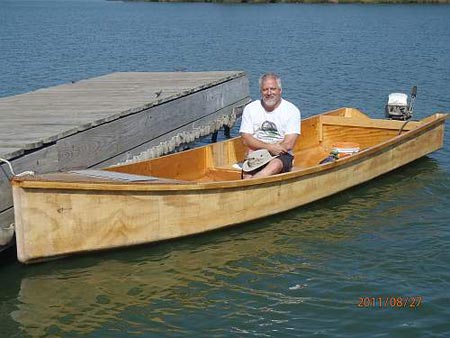 He brought it to Rend Lake with fresh paint and a new 10hp four stroke... 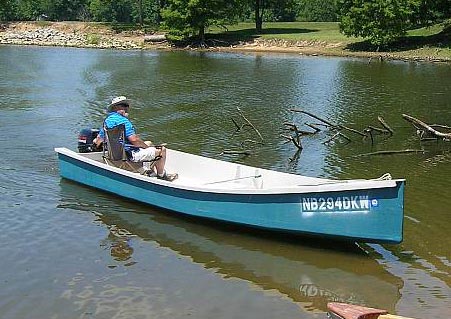 And I hopped aboard for a ride. He had his gps with him... 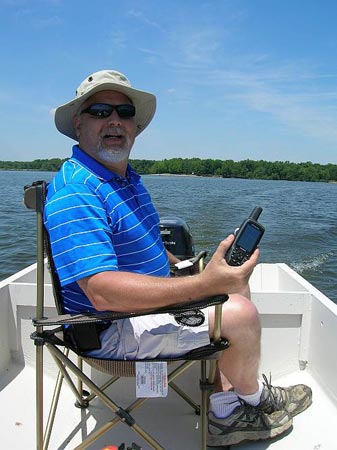 Very nice I thought. He will be using it to run rivers. We figured we were at about 800 pounds total. At 8 mph she started to lift on plane and at full throttle was doing 15. She banked her turns nicely, something you can't expect a true flattie to do. 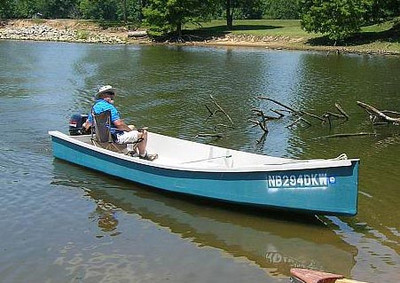