Earlier this year I was contacted by Pierangelo from Italy who liked the look and simple construction of my Dayboat/Launch but wanted something a bit more "live aboard".

He contributed a sketch of what he wanted and it looked quite sensible (below).

When I say "sensible" I mean that the boat has a chance of having a quite wide appeal to lots of different people. This makes a big difference as to whether I think it is worth my time to develop the boat or not.

If a boat has limited appeal then then the customer would be up for the complete development cost of the plan and materials - in effect a custom boat. For example this boat has taken several weeks to develop and a single owner would be unlikely to cover the full cost of all that work.

So I will just have to hope I can sell around 10 plans - which I think is quite possible. I really like the look of this boat and think it has a useful bit of space inside and would not be too arduous to tow for distances if required or easily fit in a shipping container to be taken overseas.

An additional fillip is that to have a boat being built to be used in Venice is a very useful marketing tool!!! 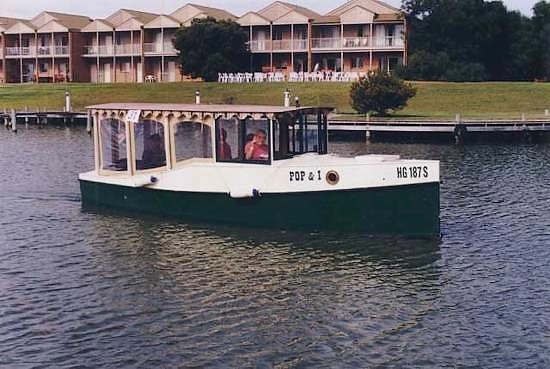 Design
The design is derived from my slightly shorter Dayboat/Launch - picture above. Both plans are included in the package.

Not only does the new boat have more room at very little extra cost but it will have better rough water handling. Not that these boats are meant to be taken offshore - their natural environments are rivers and calmer days on lakes.

The fine bow will cut any chop nicely and the boat will cover distance without bouncing around - providing she spans two or three waves within her length. But if the seas are big enough for the boat to climb up the faces and drop down the backs of the waves she will break - it would be a foolish person who had her out on such a day.

But any day that it is nice to be out there - a wonderful boat. 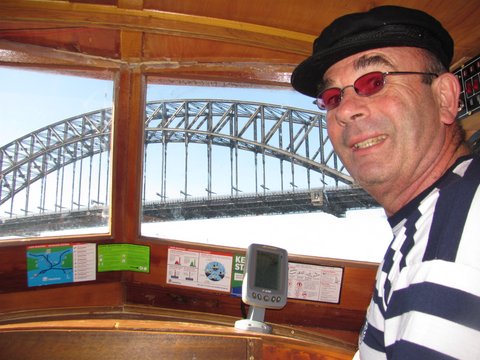 The original Dayboat has the fine bow of the original "Phil Bolger style" riverboats but has a cut off stern to keep the length down. This can result in an unbalanced hullshape which can be a bit wild in a following sea because the bow is so fine and the stern so wide.

"Venezia" however has her stern restored to her so will be a much easier boat to drive in following seas than the smaller version - she will tend to track straight rather than changing course as waves catch up with her from behind.

Construction
Construction is by a prefabrication method where the sides and bottom of the boat are built first along with the bulkheads. 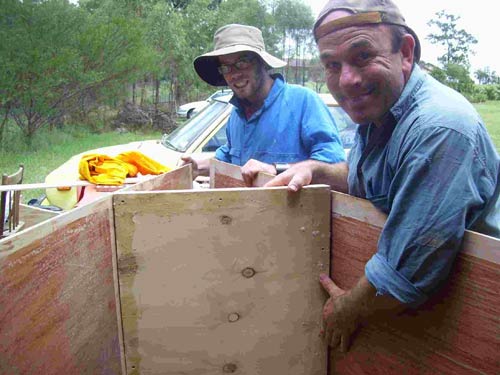 It is then turned upright and propped into the required curve and the rest of the boat built on top of it.

This building method means that there is no requirement for a strongback frame to build the boat over and doesn't require that the whole boat be turned over at any stage.

Just like a house - you build the foundation and then build up from there - with the difference that most major components can be prefabricated on the flat. 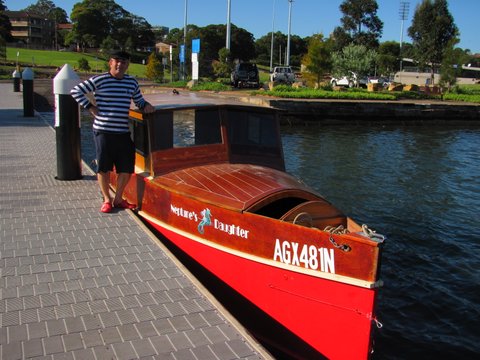 Interior Options
While a certain amount of the internal furniture and structure is required for the strength of the hull there are certain options as far as changing the position of the various parts of the interior.

For example in Pierangelo's version I think he has put too much area into the head (toilet and shower). I would tend to move the front bulkhead of that section back quite a long way to fit some extra seating inside the main cabin..

Another possibility would be to have the back section of the boat open if the general use was more for daytrips. 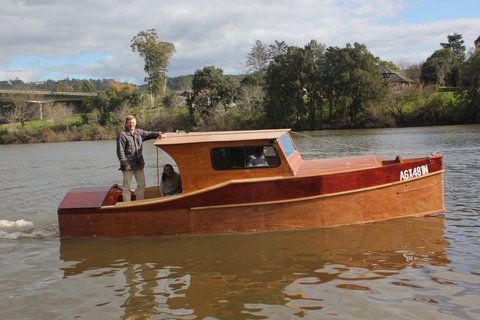 As with the smaller Dayboat there are a number of rules for modifications - mostly oriented toward keeping the centre of gravity low for stability (the cabinsides are quite lightweight and the roof is not meant to be walked on) and ensuring structural integrity (the furniture provides a lot of strength to the hull).

The basic rules are:

Performance
This is a very light boat and is relatively narrow. This is excellent for good cruising speeds in displacement mode. 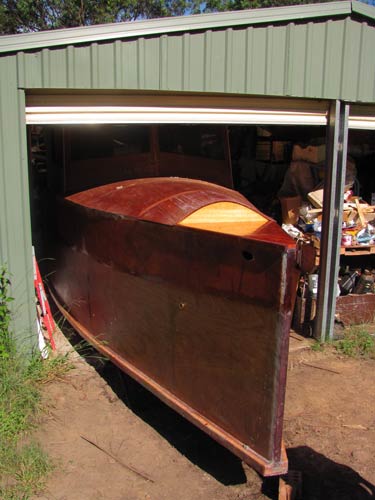 The best motors are the "high thrust" four strokes like the 15hp in the Yamaha range. It weighs almost the same as the 10hp of a few years ago so will boost performance considerably.

The 4-strokes are to be preferred because they have a wider power band so will run at a wide range of different speeds without any problems.

The high thrust variants are good for punching along in adverse conditions and are generally more suitable for bigger craft like this.

As to speed...
I would expect that the boat without too much gear aboard would hit a top speed of around 8 knots and a crusing speed of around 6. I wouldn't be surprised if the 15hp could add a couple of knots to both those figures without making too much noise and fuss, but the most economical cruising speed will probably be around 6.

I don't expect her to make many waves so probably will not be responsible for the settling of Venice any faster into the mud! 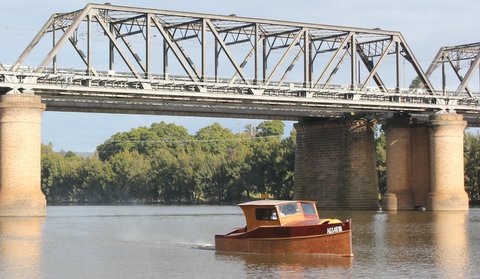 Summary
I've made a bit of a career out of square and almost square boats. The trick is to get them to look good in the water. This boat has a lively traditional sheerline and a nice "in proportion" cabin.

As well it is a very practical boat - reasonably easy to build, small enough to not be too big a worry to own, economical to run and capable of covering ground at good average speeds.

It can be trailered and has a big enough roof to take a couple of solar panels if required. 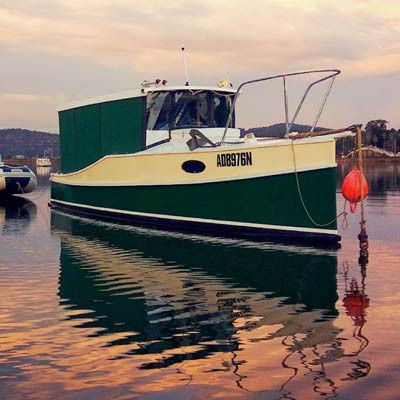