SKU:
JM-VEEP14
Availability:
not available at will call
measurement:
imperial

I've tried several different ways to shape a hull to handle rough water. Rough water is a problem around here where the manmade lakes are flat and wide and shallow. We get whitecaps when the wind blows about 12 mph. I think the situation is about the same in a lot of places, like the Gulf Coast and the Chesapeake. When you do a power boat that is supposed to plane the situation becomes critical from the standpoint of control and of pounding to destruction of the hull or of the skipper. In boats like Brucesboat and Dorado I tried it with multichines to give a bit of a flat bottom. That makes the boat easier to use, I think, because it will beach sitting straight up and you will have a bit of a flat to walk on. I've also shaped the bow as in Twang to make the boat meet a wave a little bit at a time instead of with a sudden bang as with a flat bow. But the problem with a planing boat is that at speed it won't meet the water with its bow. Instead it will rise out of the water to meet it with its mid bottom. So with Veep14 I tried a V bottomed skiff.

Veep14 might be a handy all around small skiff which I would hope would take some rough water. (I see a bit of falseness in the idea that it would be "safer" than a flattie because the skipper might be tempted to venture forth in worse and worse weather while the flattie skipper will clearly chicken out and stay in protected areas. So when the V bottomed skipper finally gets in over his head it might be during weather in which no one will attempt rescue.) Veep14 has a constant V all the way along the bottom twisting to a high deep V bow in the forward third. The V reduces the capacity of the boat compared to a flat bottomed job. In this case it would be about 600 pounds maximum which would include the weight of the hull, motor, and gear. That might amount to 300 pounds so you see it is a two man boat at the most.

I've been warned that a V boat like this will need significantly more power than a similar flattie. By the size and shape and layout of Veep14 the usual Coast Guard advice would be for 15hp maximum. I would expect it to need that much to plane at max weight.

My original hope was to make this boat 12' long and light enough to cartop. But I convinced myself that it would be a one person boat if that short and that would be a mistake. And if it were light enough to cartop it might also be too flimsy to take the rough water it was intended to face. So I made it longer and used 3/8" plywood instead of the 1/4" I would use for a cartopper. The weight went up to the point where it will need a trailer but then again a 15hp motor is going to weigh close to 100 pounds and no one will carry around something like that more than once if he can avoid it.

Brian Walker built the first Veep14 in British Columbia. He said it was to the plans but he added a strake above the blueprint sheer line to give a bit more freeboard, and he put a small bit of flare to the stern for looks. There are some other detail changes but the bottom of the boat is to the plans. He got a good summer's use out of it including water skiiing behind it! He wrote:

I installed a partial motor well; I did not extend it completely athwartships. I wanted to have access to the drain plug and under the well. Perhaps you can see the detail in the attached pics. The partial well effectively transfers the motor stresses to the next bulkhead, which is buttressed by the aft thwart. It is very solid.

I added some short lift strakes aft, just under the chine, as an intiial attempt to reduce spray, This was not completely effective, so I then added the spray rail. 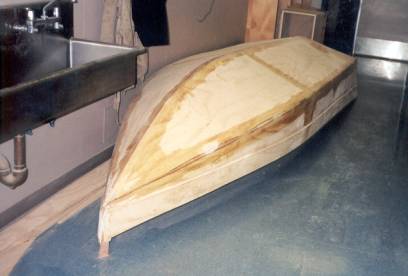 For the lift strakes as per the plans, I cut a 10 foot spruce 2x4 diagonally in cross-section. This created a lift strake surface parallel to the water's surface. I fastened the strakes with epoxy and screws "after" applying a layer of 6 oz. cloth and epoxy on the bottom reaching above the waterline. (After doing a lot of boat repairs over the years, I don't think it wise to glass over strakes or other scantlings I don't want to create a terrarium under my boat). I removed all screws after the epoxy set and filled the holes with thickened epoxy. If (when) the strakes get damaged on the beach, the fibreglass skin won't as likely be compromised. In effect, the strakes will serve to protect the fibreglass skin.

I had my son and his friend out on the lake again today and the boat performed very well. We could go right through the wakes of other boats without slowing down with minimal pounding. A good one-foot chop came up and I could blast along solo at 25 mph both ways -- going with and against the waves. The boat is much more stable at rest than I anticipated. I can climb in and out of the boat from the water, but I might not have been able to in rough conditions without the raised freeboard for fear of swamping. The raised freeboard also allowed me to use a long shaft outboard, which is almost a safety requirement to go salmon fishing off the west coast of Vancouver Island. For inshore use, I would think that a shorter transom would be just fine. 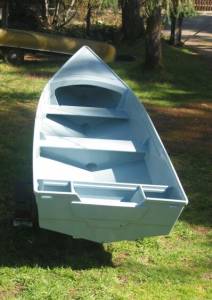 The hull has not been changed except for some added flare, as discussed. The spray rails keep the water down in a crosswind and/or if the boat is loaded down. Without spray rails, the spray is confined to the aft 2 foot section with one or two people on board, but any heavier loads tend to draw water up the sides farther forward. Any cross wind can make for a wet ride. The current spray rails I added are 72" long x 2-1/2" x 1-1/4". They work very well with a medium load (three adults). I have sloped them downwards and outboard (in cross-section) about 7 degrees to force the water downwards. They are fastened about 3-1/2 inches above and parallel to the chine. I might extend them to a full 96" if I find myself carrying four people and a dog on a regular basis; otherwise, the water tends to climb up the vee bottom and up the sides amidships (but it's OK as is if I just slow down). I think three passengers is a safe limit, anyway." 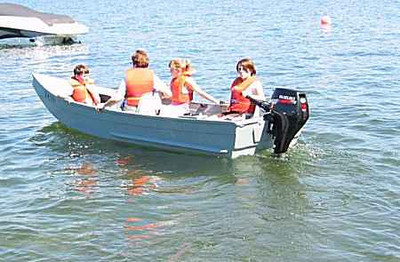