Scram Pram is an interesting boat that I designed for Wil Gordon of Houston a few years ago. He built the prototype shown above, including making that multicolored sail. Wil had owned some production pocket cruisers and had sailed in Karl James' Jewelbox. He wanted a huge rig all in one sail for moving in very light winds. We started the design process by enlarging IMB and it turns out that at least two Scrams have been built while the prototype IMB is still abuilding.

The lines show that Scram has a multichined cross secton, like my Piccup Pram, and I've found that makes for a very fast and seaworthy boat. The top is built up like a Birdwatcher. Everyone sits inside, including the skipper. The boat can also be steered by sitting in the open top slot as shown in the photo. The top of the cabin has a slot that runs full length. If you sit to the side you are inside under the deck, but you can stand up in the middle. In bad weather the slot is covered with a snap-on tarp. If you have children this is a good boat type because they will never be on deck. If you use tinted plastic for the windows and a white hull, the boat will be cool in hot weather.

But the main advantage for the Birdwatcher cabin, invented by Phil Bolger, is that the crew sits low and the crew's weight acts as ballast, instead of making a boat top heavy as with a normal cruiser where you sit on a raised deck. Sometimes the effect is so strong that the Birdwatcher boat will be quite self righting with no ballast other than the crew weight. So you can get a nice light simple self righting cruiser. With Scram it didn't quite make it. In tests of the prototype, the boat was just barely self righting with a crew of one against the floor when the boat was rolled over 90 degrees by a rope attached to the masthead. But the design has water ballast tanks on the floor to take 300 pounds of water. With the tanks full the boat is so stable that the test crew had trouble rolling the boat 90 degrees with the mast rope. When released, Scram popped right up. The testing was done by Tim Weber of Houston and was written up in his web site last year. Tim felt that Scram would be OK with 100 pounds of ballast and that there was little need for more than 200 pounds. 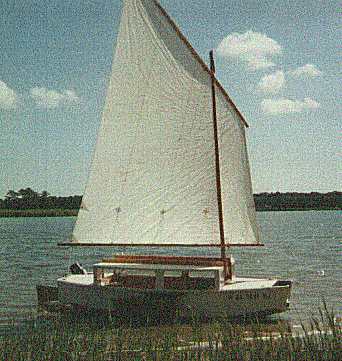 A second Scram was built to prototype plans by UT Roberts of Savannah. His boat is shown above. UT's boat had two significant changes. He reduced sail area to 150 square feet from the original 170+. I made the sail shown in the photo and I feel it is quite enough, especially since the boat has a motor well built in and only 2 or 4 horsepower will push it fine on very light days. Very few people have the patience or time to sail in light fluky winds. Almost any boat this size will end up with a motor which will get used a lot. Then a huge sail rig is not the best thing to have. UT's boat also did not have water ballast. I think he has sand bags lashed below seating benches he has built in, a good option probably if the bags are very low down and very well secured. The idea of bench seating is nice but one must scope out the bench height very carefully to get enough headroom. As is, the water ballast tanks have a foot well. If I were building a Scram, and I would do so if I didn't already have 7 boats in the shed, I would build in the ballast tanks and use the smaller sail.

Scram uses taped seam construction with five sheets of 1/4" plywood, nine sheets of 3/8" plywood, and one sheet of 3/16" dark Plexiglas.

Following is a youtube video which we just made of the first test sail of a Jim Michalak Scram Pram which I finished building for Greg Flemming here in Australia. Greg had built the hull and cabin framework, but had been overtaken with work-related issues, as asked me to finish her. She will go back to him now and he will paint the interior, which is currently bare.

In the initial part of the video, I am sailing alone with Paul Hernes videoing from shore. I had no water ballast on at that stage. The first section of the interior sailing shots, Paul was sailing with our friend, Dan, on-board as well. The conditions were light and we carried no ballast. Towards the end of the interior shots you see the next day - plenty of wind, still no ballast, and I was by my self, trying to film and sail at the same time. Shortly after I ceased filming, I hove-to and filled the ballast tanks, which made operations somewhat easier.

Great boat - 4.7 knots hard on the wind, and 6 knots downwind - wake as flat as a pancake, and tiller very light. 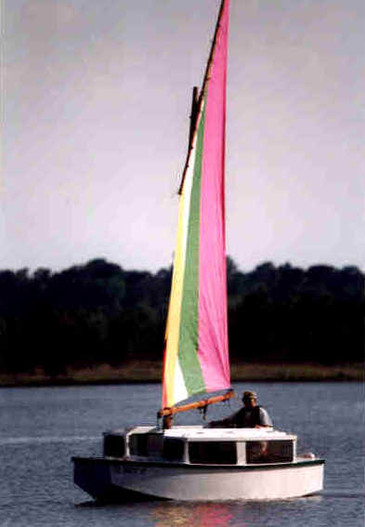