My favourite Boat Designer, Phil Bolger, has a saying something like "there are two sorts of good boat, ones you live aboard and ones that you stick on the car roof to take home".

This might be an oversimplification, but it contains more than a grain of truth.

I have taken it to heart with each of the boats that I have built for myself, "Beth" the 16ft sailing canoe that I can get off the car roof by myself was followed by the Balsa Strip "Wee Lassie" canoe which is 10 1/2' long and weighs in at 12 lbs. Then I designed and built the Wooden Raceboard (racing windsurfer) that, even though weighing in at a "hefty" 12kg (about 3/4 the weight of a carbon fibre production board of the same era) was at least stackable!

To reduce size much beyond these limits starts to strain the definition of what a boat is - is a surfboard a boat? I suspect not - there is the question of using hands for propulsion and the board not supporting the surfer's full weight - both of which are quite unboatlike. Though I did borrow this sailing dinghy once . . .

Move a size up to a surfski and I think you have a real boat - most sizes keep you out of the water most of the time and there is the possibility of moving moderate distances at moderate speeds with the use of the paddle.

Surfskis come in two basic types. Long thin ones for speed in open water and short ones for catching and maneuvering on waves. I am interested in the short ones here.

These skis have become shorter in the search for tighter turning while on a wave. Their thickness has increased at the same time to retain flotation.

The curious thing is that for every ski I see being used in the surf I see 10 being used on smoother waters. I suspect people like their portability and the ease of storage - easy to drop onto the roofracks and head down to the water for a spontaneous paddle after work or on the weekend.

Covering longer distances is just not the point - the point is to clear the cobwebs and get cool.

The Ski shown here, the "Russki" is a relative of my sailboard in shape but with a much simplified structure. It has enough buoyancy to support a paddler of up to 200lbs (90kg) with a good reserve.

The really high performance waveskis are usually a couple of feet smaller for even better turning when surfing the face of a wave - they can turn much tighter than most of us would need when a good ride on a moderate sized wave is the focus. The slightly greater length of the Russki will paddle easier on flat water and provide a good, fast ride on a wave.

The Russki comes out of a couple of sheets of ply - (imperial 8ft x 4ft, 2440 x 1220mm) and is a suitable project for a first time builder of teenager. 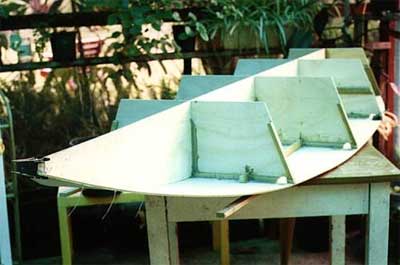 It requires no strongback (building support) as the hull is self jigging. The hull has a minimised internal structure, the seat is a block of foam set into the deck, carved to hold you in place and then glassed over. My calculations show the weight will come in at 11.5kg (25lb) built of Gaboon ply and epoxy - comparable with production skis.

Oh Yes, it is called the Russki after a former workmate of mine. Russell is a sawyer, a big bloke with a beard and tattoos and a couple of missing teeth (a hazard of the trade). He also writes rather good poetry. It was his idea, so Russell's Surfski - Russki. 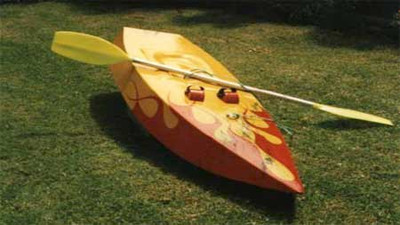