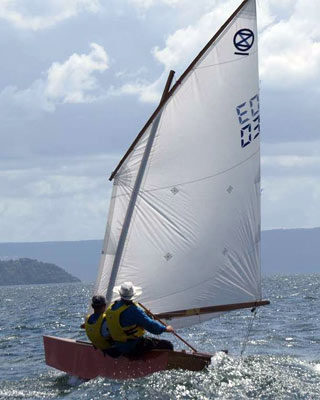 Really Simple Sails is a Philippine owned business that works closely with Michael Storer Boat Plans to produce sails for the Goat Island Skiff and the Oz series of boat - the OzRacer Mk2 and RV, the OzGoose and Perttu Korhonen's Ocean Explorer. 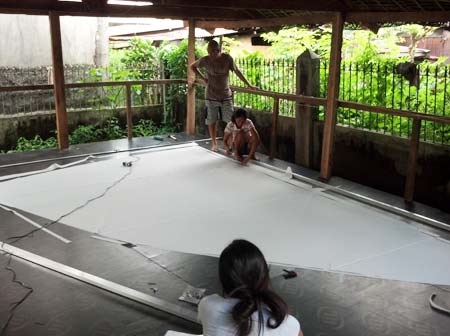 Sailmaking in the Philippine loft

What is the quality of materials?

All the fittings and sewing thread are well known brands used by most sail lofts in the USA, Australia and UK.

What is the cloth weight?

It is 4.1oz high tenacity dacron for the Oz Racer Sail and Canoe Sail. The Goat Island Skiff Sail is now made from 5 oz cloth.

How many reef points?

There is more information below, but the Goat sail has three uneven reefs, the Oz sails have two even reefs and the Canoe sail has one.

What are the main differences to sails I can buy from my local sailmaker?

If you have a really good local sailmaker they will be able to make a sail with slightly better shape. A racing sailor will know what they want and go that way. But Really Simple Sails offers the same quality of materials for much less money.

The sails will have been folded for their shipping. We recommend you follow the information below for storing the rolled sails attached to the spars semi permanently to allow the folds to work their way out of the sails

In many cases the cost of getting your boat on the water will be reduced by 250 to 350 dollars and you will get the same lifetime as locally made sails.

Are there any advantages to Really Simple Sails

Michael Storer has developed the sails from the lessons learned from the many people sailing the boats around the world.

Some examples are that the Goat Island Skiff has uneven reef points. From experimenting with the boats we have found that the first reef should be significantly smaller than the following reefs. An opposite case is with the Oz Series boats. The rectangular planform gets outstanding stability, so the reefs are fewer and equally spaced.

The feedback from sailors also allows Michael to develop the sail shapes and details in the light of shared experience of many sailors. He implements the revised drawings into the working instructions for the sailmakers. 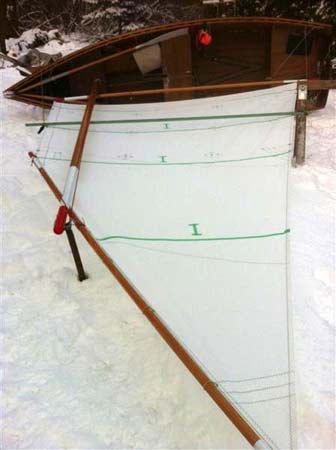 Static sail test of the Goat Island Skiff Prototype #1. You can see it is a little bit too flat in the top and mid parts. The Prototype #2 sail was made deeper and the production sail deeper still.. There is a little bit too much tension along the head putting a fold in the sail next to the yard. The spars are flexible enough for downhaul tension to flatten the top of the sail easily.

The current sail design for the Goat Island Skiff has gone through three iterations. We did two trial sails that were tested and measured by Albert Zuger in Canada. As a result we took the best sail of the two as the basis. We also found that the sails were a little flatter than optimum, so more depth has been added in the Mk3 version.

The Oz sail is the mk2 version, the best of the first two trail designs tested by Rick Landreville in Canada.

We recommend the sails be stored attached to the spars to make getting ready for sailing much faster. Put the mast in, attach the halyard to the yard (the top spar on a balance lug is always called a yard, never a gaff), hoist the sail, tension the downhaul and attach the mainsheet. It is possible to rig either the Goat Island Skiff or the Oz series of boats in about 5 minutes.

Rolling the sail without detaching it from the yard and boom facilitates such quick rigging and the rolling prevents sail fatigue along folding lines as they are folded and unfolded repeatedly.

Front Reef Line - The sail is reefed normally by lashing down the luff and leach using the big eyelets on the edge of the sail. As small boats get less stable as you move forward in the boat having a reefing line tied off on the boom, through the front eye for the reef and to an eye or block on the sailthen back along the boom to a cleat. I would recommend either a CL217mk2 Clam cleat (it is a side entry cleat so you don't need to thread it or a traditional horn cleat.

If this is tied in first and pulled very tight that is enough. I would probably recommend spectra for the rope so it doesn't stretch at all.

Back Reef Line - The back end is more accessible from the body of the boat usually so can be tied in manually.

It is very important the sail is tied down to the boom as well as pulled out towards the end of the boom. If the reef is going into the front sail on the boat, don't overflatten the sail. Depth in the foot of the front sail will help you keep going against waves, particularly upwind. Much, Much faster. It gives you power low down that won't heel the boat too much and a touch more weather helm to stop the waves knocking the bow off the wind.

Basically you want to have a depth to chord (distance direct between the tack and clew of the sail) ratio of 1:10. So put a mark on the boom for the back of the sail and write “Reef 1” or “Reef 2” beside it. Guide marks like this can save a lot of time and reduce the risk of making an error.

Reef Point Lacing – there is some urgency usually attached to reefing. For most boats the reef lines are the important item. But often when there is some chance that the sail will be unreefed a bit later or there is not time to snug everything down racing sailors won't bother at all with the reef point lacing in the body of the sail. It depends on the boat but often the untidiness is not great.

Additionally, the traditional solution of an individual tie at each of the eyelets is slow and awkward to put in and remove. Also it is a rigid system. If one of the reefing lines comes undone all the load will go on the first sail tie and risks ripping the reef point eyelet out of the sail.

I recommend the same method used on racing yachts. They use a thin shock (bungee) cord that spirals around the boom and will stretch and not damage the sail if a reefing line comes undone or breaks. Also the number of eyelets is minimised.

Using Really Simple Sails on other boats. Advice and dimensions

PDF with sail details on GIS and OZ sails:

More info on the Canoe Sail: