Michael Storer's OzRacer RV doesn't replace the mk2 .. the OzRacer Mk2 is still the better performing of the two and will be enjoyed more by experienced sailors. The RV is a simpler RECREATIONALLY oriented boat with almost the same performance.

The OzRacer RV construction in turn led to the 12ft Oz Goose design. The goose is the same method but is much faster and can easily carry two adults and a few kids. The construction method keeps the weight down to around 75-80lbs. Still cartop territory.

Not a PDRacer though one was modified to fit their rules and won the worlds in 2010.

The plans are a response to the learning curve designing, building and sailing the OzRacer Mks 1 and 2. It also is from the feedback received from builders around the world. 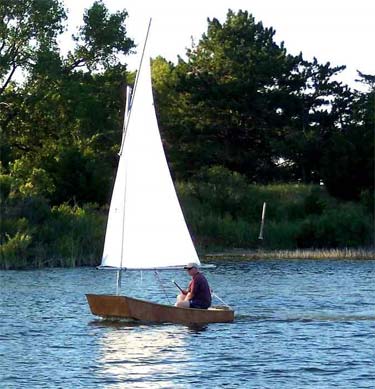 Rick Landreville in Canada built one of the OzRacer RV prototypes two years ago - it was going to be known as the Mk3.

He sailed it in the "Worlds" (2010) and ended up winning ... but the story went that he finished the race, sailed to shore, had a coffee, gave his camera to someone to take photos and then went out and sailed the course again and came third. 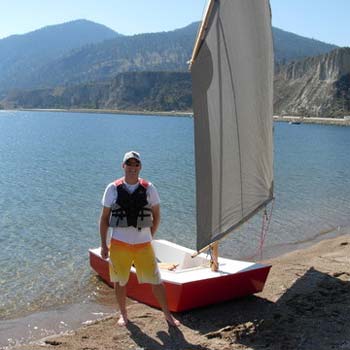 That's the value of good foils, light hull, good sail (the plans include detailed sailmaking instructions - for a sail that will cost you $50 rather than $500). Having a good sailor aboard doesn't hurt either.

However there have been questions about the Mk2 ...

More Space
The centreboard is now a leeboard fitted inside the port buoyancy tank leaving the cockpit completely clear. There is a slight drop in performance relative to the Mk2. But many will consider it worthwhile
as the boat accommodates bigger sailors, couples, a bunch of kids much better.

Also it brings the crew next to the skipper ... so they can take over part of the running of the vessel for a teaching situation. 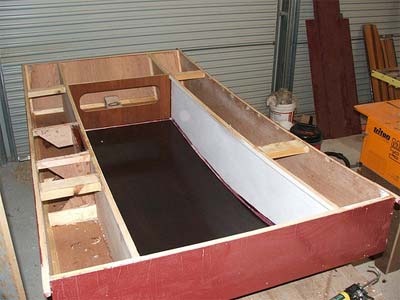 Simplified Construction
To make the construction easier the longitudinal buoyancy tank setup has been adopted - we would have done this with the Mk2, but we were really conscious of keeping the ply sheets down to 3. This layout that the four main hull components apart from the deck and hull bottom are identical.

Also the boat uses a variation of the same duct tape construction method as the Quick Canoe and Quick Canoe Electric designs. An advance on stitch and glue because it leaves the interior of the boat completely clean - you can glass tape or epoxy fillet the interior with no wires to work over or insert or remove.

It also means that about 2/3 of the hull timber has been eliminated. Reducing labour and in most parts of the world reducing expense substantially.

Suitability for younger or beginning sailors
The boat has two mast postions. One for the standard sails developed for the mk2. There is a choice of a triangular sail with a sprit boom or a slightly larger balance lug which is reefable. These sails look big but the square hull has so much stability it handles the area very nicely.

The second mast position allows for a 4.7 square metre sail (52 sq ft) for smaller sailors. Free sail design available on request. You can use the same mast with the full size lug, the full size triangular sail or the 4.7 size Junior sail

Still a "Boatbuilding Course in a Book"
The book is 99 pages and covers every aspect of building the boat comprehensively step by step. It even covers making the sail and rigging the boat properly. Once you have built from this style of plan you will be able to build many types of boat using the methods clearly explained and consolidated through practical use.

Rick Landreville's construction photos for the OzRacerRV sailboat are here.

Webpage for the OzRacerRV simple sailboat 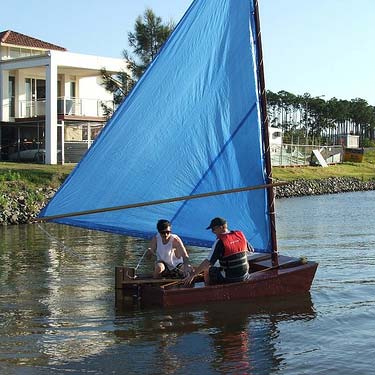 Setting up a recovery line to right a leeboard OzRacer, PDRacer, PDGoose or Goose sailboat

A sharp eyed customer notified me that I hadn't included a method to right the OzRacer RV. The nice thing about the OZ series is that all the boats come up with very little water inside when righted from capsize. Also the wooden mast doesn't allow the boat to turn completely upside down making righting easier. The hollow mast on the OZ versions is relatively light and makes the load required to right the boat quite light. You don't need to jump on the centreboard normally just pull it down by the tip. 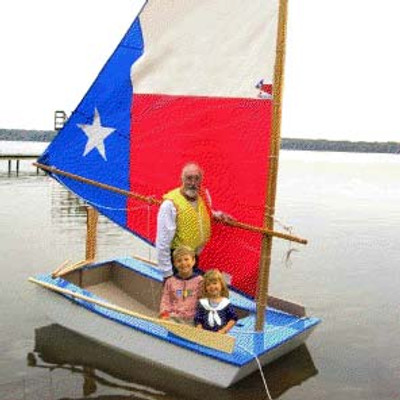