The lapstrake sides and classical looks of "Rifleman" were an accident more or less, Frank Perry had been on the beach at a popular resort when He had seen Roger Davies in his beautifully presented "Rogue" sailing dinghy.

Intrigued by the boat, Frank was soon talking to the owner and boatbuilder Roger, keen to make a sale soon had him out on the water. Frank bought a set of Rogue plans from me and intended to have his new friend build the boat the following winter but after some study decided that a craft intended primarily for sail and oar would not be fast enough to get him to and from his favourite fishing spots along Wellingtons ironbound, windy coast, so after several to's and fro's on the phone we decided to design a completely new boat to suit. 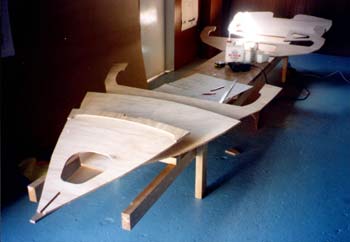 My client described himself as "not as young as he once was" and arthritis means he cannot tolerate a cold, cramped seating position for long. His boat needed to be faster than Rogue could be pushed with an outboard, her shape being wrong for planing speeds with a bigger outboard motor. But the advantages of the unusually light weight with the consequent ease of handling was to be retained, along with the practical interior, ease of building and not least the lapstrake or "clinker" sides. So, starting with a blank sheet of paper I started drawing up Rifleman, an outboard motor powered planing hull with a designed serviced speed under normal conditions of 18 - 20 knots. This should mean a top speed in flat water of about 25 knots, not super boat performance but a comfortable cruising speed for a fisherman who doesn't have to cover a huge mileage to his pet spot. 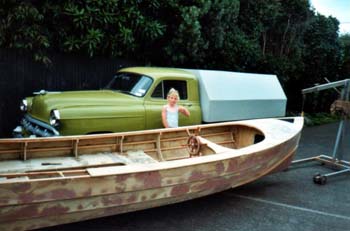 To obtain this performance with the modified dory hull form I used for Rifleman a 20 hp motor should be adequate for those cruising two up, while a "25" should be quick enough for most even when loaded up a bit. At the gentler end of the scale an 8hp motor should push her along nicely, and a 15hp plane her comfortably with two aboard. One has been fitted with a four stroke Honda 15 and is a particularly smooth and quiet boat in use (and no oily rainbow sheen on the water!)

An oversize planing shoe enables the boat to carry a large load at planing speed on moderate power, or to plane under full control at comparatively low speeds. This gives low fuel consumption and easy handling, even in quite rough conditions. 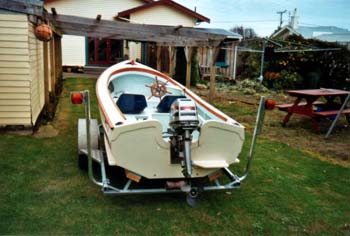 The steeply rising bottom panels soften the ride, and give good directional stability while the long fine entry eases through the waves and keeps the spray down in a way that the more common wide beam can rarely achieve.

Inside there is room for four to ride in comfort, and to fish without tangling lines. There is adequate storage under the foredeck and under the centreline of the seats, while the space under the side seats and forward thwart is sealed off providing sufficient air tank buoyancy to float her stable and baleable fully swamped. This space can be accessed through plastic hatches if required and is a good place to keep spare clothing, matches, food and other essential small items. ( Don't put the bait in the same one as the food!)

Steered from the console on the centre thwart the boat is easier to trim, and generally will provide a more comfortable ride with the weight out of the ends. With the motors normal remote control kit and a simple cord and pulley steering system it is possible to rig the controls without having to spend too much on hardware. 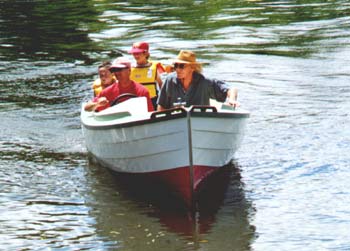 Frank intended to launch the boat from beaches and rocky shelves that were barred to him with his heavy fibreglass speedboat, and looked forward not only to the convenience of the smaller boat but also the economies of the 18hp Tohatsu outboard motor he'd chosen, not to mention the prospect of owning a more economical towing vehicle.

Towards the end of the design process a couple of my letters went unanswered, and when a telephone message got not response I carried on with the drawing process but did not send the plans off for fear of them going astray. (he'd paid so I figured that one way or another he'd get back to me).

Two years or so later, and after selling quite a number of plans I heard from a very apologetic Frank. Roger had talked him into a more conventional 14 ft deep vee from a very well known designer. They'd built it and it fumed out that the thing had been less than adequate in the conditions that prevailed in Cook Straight! There was nothing really wrong with the boat, it was just the wrong one for the job! 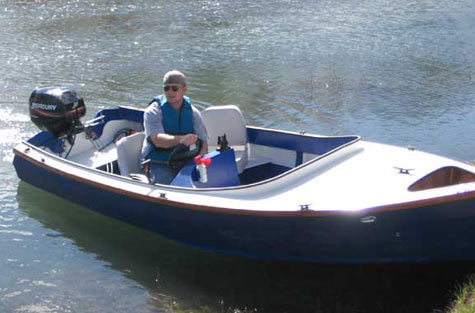 With several "Riflemen" in the water by then I was able to reassure Frank that the boat performed pretty much as advertised and sent off the plan set. He's building this one at home by himself and I hope to hear from him sometime to see how she has performed.

Attached a few photos of my Rifleman with all the interior fitted out and epoxy treated. I have just turned the hull over and am filling and scraping ready for painting.

The brad gun with the composite brads you sent me worked a treat although it is a little tedious filling all those little holes. Using that machine is a little like eating peanuts.....once you start it is hard to stop. 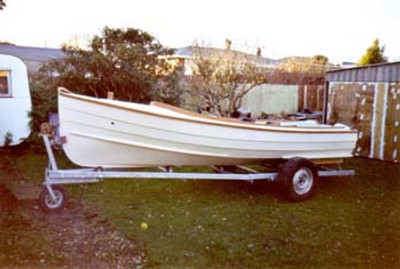