I built the original Mark V 39 six years ago, and I have sold over sixty sets of plans for it. It has cruised over 10,000 miles, and I have lived on it since it was launched. I know of at least two others that have been built. There may be more, but I haven’t seen pictures. The most common request from potential plans buyers was for a smaller, trailerable version. I have just completed the plans for one, the Mark V 28.

I chose the V-bottom instead of the flat bottom that was on the Mark V 39. The V-bottomed hull will go into a head sea a lot more smoothly, and won't pound much. The Mark V 39 was a big enough boat that the pounding wasn’t too bad when in small lakes and rivers, but a smaller boat would be quite a bit more uncomfortable. I also think that the V-bottom shape would be easier to line up on the trailer. It is not much more difficult to build than a flat-bottomed hull.

The layout is very pleasant to use, you walk through the cabin to get from the forward cockpit to the aft cockpit. Anchoring is a breeze, since the anchor is just a few steps from the helm. The forward side windows hinge back against the cabin side, so you can hang out the window while docking or going through locks, making single-handing easy.

Loaded displacement is about 4,000 lbs, with a 3,000 lb empty weight, making it relatively light for trailering. Beam is seven and a half feet, and the hull draft is only fourteen inches.

The bottom is straight section V-bottom, which I think is the best shape for moderate speeds. It won't pound much, and doesn't throw much spray. Since the forward part of the bottom has a lot of twist, it has to be laminated from narrow strips of 1/2“ plywood. It is not too much extra work, since gluing smaller pieces is actually easier than laminating full sheets.

There is a full six foot five inch headroom in the cabin, but if more is desired, the cabin roof can be built a few inches higher. The cabin interior is thirteen feet long. Forward to port there is a couch that folds out to a double berth, with a hanging locker and bookshelves behind it. On the starboard side there is a swivel office chair mounted on a raised platform that can be used as a helm seat or swung around and be facing the dining table. Aft of the table is a seat with storage underneath. Aft is a stand-up head with shower to port and a good sized galley to starboard. There is plenty of light and ventilation with the opening windows.

The aft cockpit is self-bailing, with two twenty-seven gallon above deck fuel tanks. There is no way for spilled fuel to get below. There is also a self draining locker for a propane tank.

There is a self-bailing forward cockpit with a 35 gallon water tank and lots of bulk storage underneath.

It is relatively easy to build plywood and epoxy over frames. It is not stitch-and-glue, I think that anything over about twelve feet is easier to build the conventional way. Lofting is not necessary, all the dimensions of the frames are in the plans. It does have to be built over a strong-back, however. 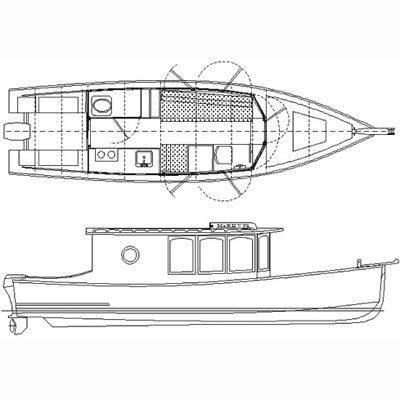