Well, I have been having a big think.

One of the byproducts of the trip to the USA was that I now know that distance canoeing and kayaking is waaaay more fun than I thought.

Several of these canoes have been converted into trimarans or outrigger canoes for excellent sailing performance. Also as a diving or fishing platform. The outrigger structure is very light and removed from the existing canoe structure completely. Outrigger plans HERE

I sort of imagined it would be tedious compared to sailing. And it kinda is, but your mind adapts and you are off and going very nicely indeed. The thing I liked was just setting the mind to the task and keeping going, particularly when there are headwinds.

I also liked the independence of camping and the days of having to carry lots of water are over with the gravity filters available these days. 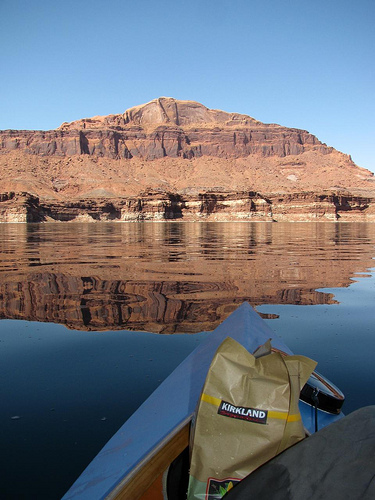 Because my income is so little I have pared things to the bone. I find cheap places to rent, have very few belongings and certainly don't have a car. So how do I mix my interest in canoe touring and nice boats with not having a car?

So I started to think in terms of disposable boats. Building really cheap and fast from the cheapest materials available. Assembling the boat over a day or so, quick coat of paint, load it up and head off. Down the Murray Darling or any other of the river systems in OZ.

Traditional canoes are really good in rough water and wind. After all they were designed to deliver the mail, carry a year's supplies or goods for sale, carry doctors or sick patients. Compared to a Trad canoe, many cheap production fibreglass canoes are heavy and tend to wander about it bad conditions.

The reason they don't wander is the hulls shape - the shape is very fine in the ends and this creates a FIN at boat ends of the boat that make it track. This picture is of the Rushton Wee Lassie I built of balsa strip (12lbs) about 16 years ago. One sweet boat that. For such a little boat it never gets knocked off course - just great for crossing lakes or paddling against a chop. You can see how the ends sculpt into a fin, placed at either end to give a huge amount of grip. 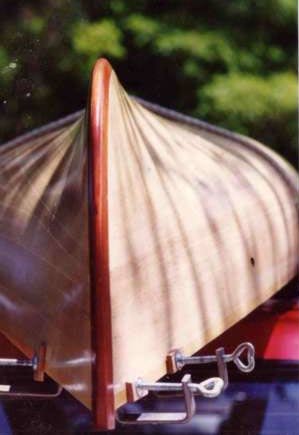 So I drew up a simple hull shape that is really a slightly more numbers focussed version of a flat bottomed canoe - but then added the fins at the front and back to duplicate the Wee Lassie's directional stability. The base dimensions of beam and length and even some aspects of the Sheer Line and Widths were taken from my more conventional Eureka Canoes. 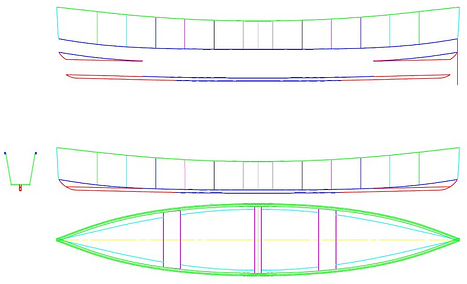 I wanted to fool around with using Duct tape to hold the hull together while building. Others have used it before, but this boat was designed to use it from scratch - particularly to make sure the loads to hold it together are very low.

In the end Rick Landreville, the trial builder in Canada (and also the PDRacer Canadian Champ) put the hull together in a shade over 4 hours ready for the seats to be put in. 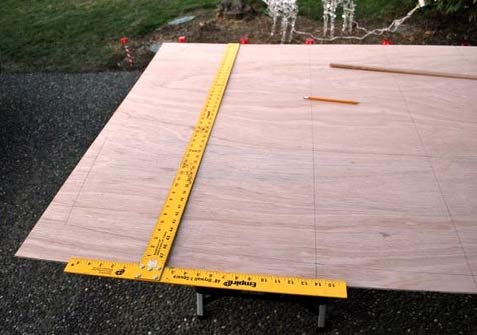 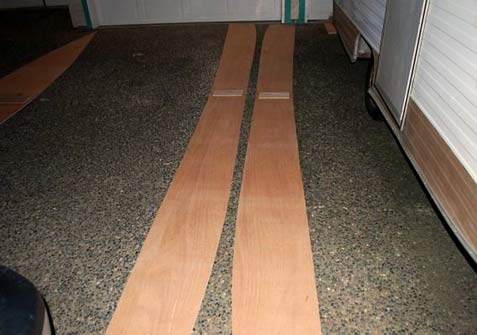 Held together with duct tape only - you can see how clear it leaves the interior of the boat for glass taping or filleting. The duct tape will not work for every boat as some require quite a lot of force to assemble. But we knew this one would not require a great deal of force. The timbers across the sheer are temporary. 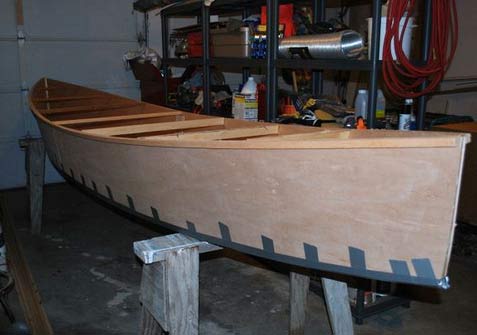 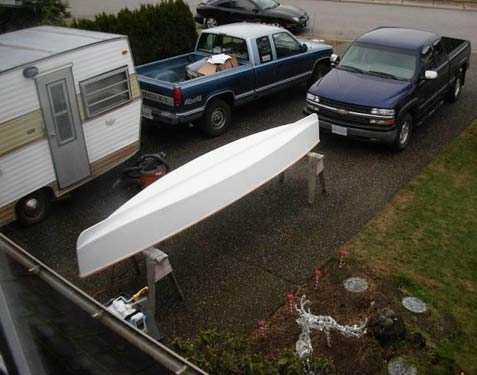 You can see how the skeg melds into the hullshape to produce the appearance (and some of the handling) of the traditional canoe. Rick was working with cheap materials - three sheets of exterior ply, PLPremium glue, Glass tape and Polyester Resin. Anyone who knows my normal plans will know that I am a stickler for quality materials - epoxy and marine plywood.

But for a boat that is truly introductory or may be used for a river trip then given away they are good enough. It has to be cheap and buildable of local materials. To be fair, the 4 hours required to get everything but the seats together did make use of Rick's confidence with power tools and work methods, but it will still be quick and easy for most others - particularly as the plans are so detailed.

Rick went for a paddle on his local pond on a warmish (30F 1C?) winter day. His daughters then demoed the boat while Rick took pics.
Stability is a big plus, Rick was really pleased with the weight - 48lbs 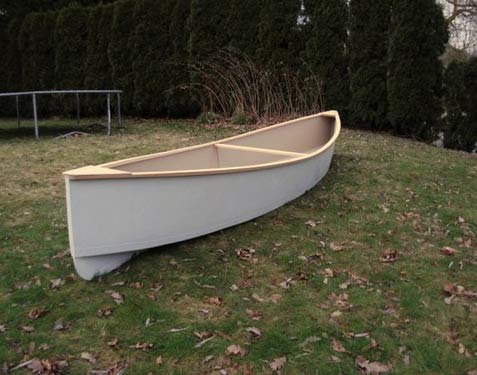 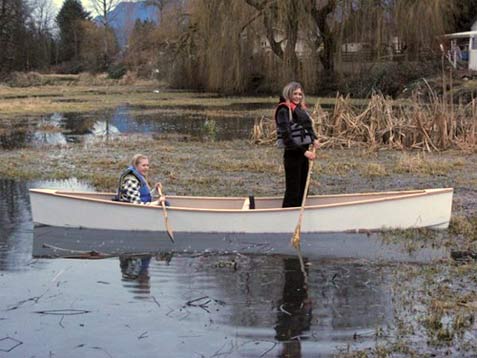 A week later Rick got out on some wider water. It doesn't look any warmer. Rick said it tracked nicely for a travelling canoe. Still looks very cold to me!

Rick is kneeling in the boat while he works out whether he will trim the skegs for faster turning and just where he will put the seats. The plans say where, but he's done a lot of canoeing so he is working it out to suit himself. 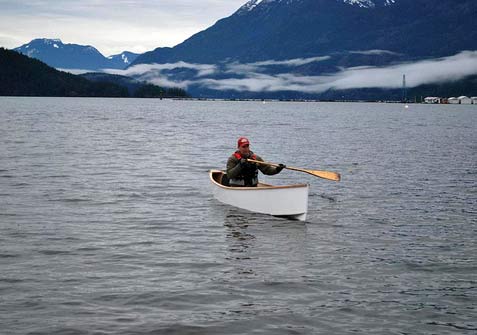 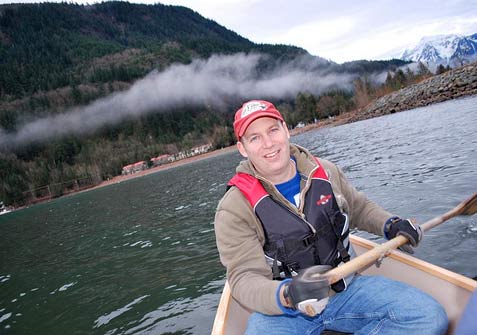 The prototype boat was built in 4 hours without seats.

A useful little blurb from the plan.

Tuning the skeg/keel depth
Contrary to most canoe literature I think the keel depth makes little difference to the directional stability of the hull. The depth of the keel is too shallow to make much difference by any standard of foil or lifting surface design. A badly wandering boat isn't changed much in comparison to a good paddling boat by adding an inch deep keel.

The thought I had based on my experience with early strip planked canoes is that the fineness/narrowness of the entry of the hull acts as a fin on the front and back of the canoe as explained with the Wee Lassie picture in the plan preamble. But keel COMBINED with the âfinsâ on the end (whether a trad hull or this simplified one) does make a difference because the depth is out at the ends of the boats where it makes a real difference. Pic in first post of thread of my balsa wee lassie hullshape.

I have drawn up the skeg/keel combination to be oversize but Rick who built the first one thought it good for a tourer. if you want to turn faster â and take some time to get to know the boat first - then the skeg keel can be planed down to adjust the turn rate to suit.

A Final Thought
Part of the inspiration for the quick Canoe was the experience of the OZ Racer - a simple sailboat that is easy for beginners to build but very enjoyable for experienced sailors. It showed me that preconceptions are often wrong and that cheap and simple can be very satisfying for a whole range of users. 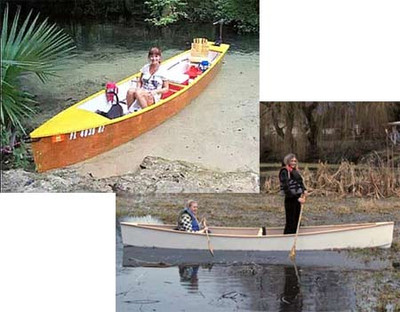