Piccup Pram was my first design to get built. Here is a photo of Chris Feller's up Chicago way. 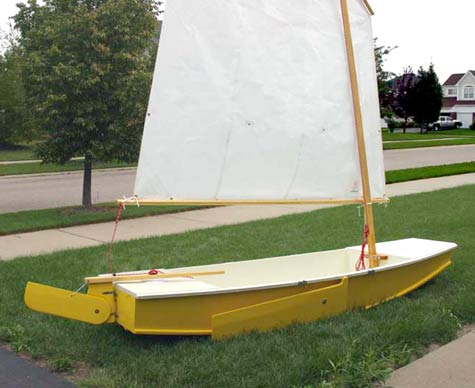 She is shown with the original 55 square foot rig. I still have the boat. The sail rig has been experimented with many times but the hull is identical today as then, except for color. You can see the big bow transom, the sweeping sheer and the multichine section. She's 4' wide and 11' long, wide and short and she sails so well because of those multichines I think. The size was quite right, easy to slide into the back of my pickup truck, which was the original idea behind the boat. And at 90 pounds light enough to cartop on an economy car. In the center is a 6-1/2' long cockpit which will hold two adults and sleep one on its 2' wide flat bottom plank. At each end are buoyancy/storage chambers, about 6 cubic feet each as I recall, plenty to keep a swamped cockpit floating very high although Piccup never capsized on me except on purpose.

After a couple of years with Piccup I got to wondering how much the boat's success was due to the multichines. I dreamed up a flattie version of it, the same overall length and layout, but with a 3' wide bottom plank with hard chines in lieu of the multichines. I called it Piccup Squared. Here are the lines:

I gave the boat a small amount of flare which allowed a good spread of the oar locks while maintaining the 3' bottom width. I thought the 3' bottom width was about the most I could use and expect any sort of handling in rough water. It was the bottom width of my old Bolger Teal and I was familiar with it. Also in the best Bolger theory I gave the sides and bottom the same curvature, a feature which is supposed to provide the least turbulence at the hard chine. I swept the bow well up to clear waves, but the stern was kept a bit low such that the transom would just meet the waterline with two adults. That feature also resulted in a fairly wide stern. The extra stern volume was supposed to give the boat a chance at using a motor. 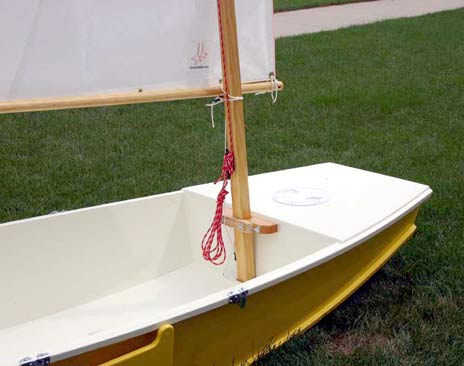 I built the boat in my usual cheap way. I used lauan underlayment for the sides and fir exterior plywood for the bottom. It was a nail and glue job all the way with lumberyard stuff with external chine logs as you might notice in the line drawings. I had a bunch of old paint around and dressed it up in a camouflage paint scheme, a feature I copied in later boats. (The funny thing about the camo paint job is that sportsmen like fishermen and duck hunters took to the boat immediately even though I was sailing it, unlike a white boat which is apparently a yacht paint scheme.) I found that the boat blended in with surroundings much better as I went beachcombing or bushwacking or shore camping. And from a practical standpoint it's the easiest sort of paint scheme to apply and touch up since nothing is supposed to match or be smooth and shiny. I varnished the interior with no sanding between coats so the interior has a dull natural wood finish. No slipping on the bottom and doesn't show dirt or mud. Since it is best left rough for footing, refinishing the inside bottom is a breeze - just sweep out the big chunks and add another coat or two of varnish. I'll add that varnishing a natural wood boat all over might be the very best camouflage scheme.)

By the time I'd built Piccup Squared I was already thinking Piccup could stand more sail area and Piccup Squared quickly became a test bed. My first polytarp sail was tried on it as shown below. This sail has 74 square feet of area and is to the Woobo sail plan. This sail was made exactly as a Dacron sail would be made. I cut the tarp into 3' wide strips and sewed it up with normal broadseams. 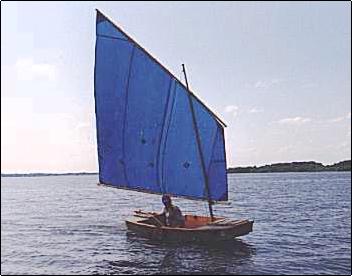 Looking at this great photo reminds me of how it came to pass. Karl James had called me saying he was thinking about making my Jewelboxdesign but was unsure about the lug sail rig. He was returning to Texas from Woodenboat School and stopped by Rend Lake for a sail in Piccup Squared with a lug rig. That's Karl at the helm. Karl went on to build the Jewelbox and went on to many adventures with it. (Jewelbox has a new owner now in Florida somewhere. Karl replaced it with his own design, sort of a blend of Bolger's Black Skimmer and Martha Jane but he's stuck with the balanced lug rig.)

In the photo you can see the wind is quite light but the boat is moving well under that big sail. She is heeled a bit and Piccup Squared is in her element. Under these conditions she is probably as fast and as good as the original Piccup. Many folks would think she is more comfortable because of her wider bottom. The heeling is pretty important to a flattie and I think the trick to sailing one is to keep the heel just right with the windward chine barely out of the water. In really light winds you might sit on the "wrong" side of the boat to keep that chine out. Piccup is different - sail it flat whenever you can. In high winds you need to tend the sail so the heel is just right. I never capsized Piccup Squared except on purpose. The sides were low enough that I'm pretty sure she will take water over the side before capsizing, unlike higher sided flatties, and I feel that is a good feature in that you get a small wet warning instead of a big wet surprise. The original Piccup really is better in rough water but you would expect that.

Here was another test sail on Piccup Squared. Jim Huxford was at the helm here. The green sail was my second polytarp sail. This one was made in one piece though, no cutting the tarp in strips and sewing it back together. "Darts" were sewn in four places where a Dacron sail would have variable seam widths. This sail was also the first 68 square footer, the sail I advise everyone to use on the Piccup family. The yard and boom are the same length as with the original 55 square footer, but the hoist is 2' taller. When reefed this sail returns to 55 square feet. 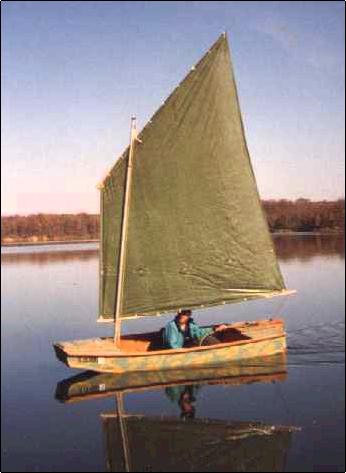 Looking back at this photo I'm reminded of the troubles I had with stretching of the luff. A balanced lug sail will set closer to the wind if there is a lot of tension in the halyard, as will almost any sail. But the stretchy polytarp had trouble in the highly stressed luff. It didn't tear, but it would stretch a lot of the draft out of the front of the sail. The result was the front of the sail was very flat and the draft was mostly in the aft half of the sail - not the ideal. This sail luff was later stiffened with a couple of fiberglass tapes which helped a lot. 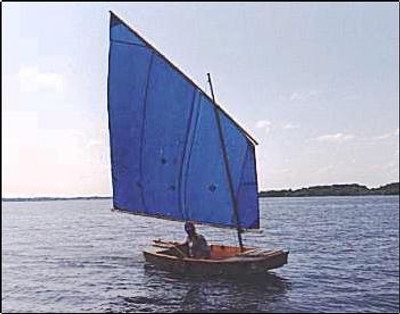