Pepita was designed in 1979 by Joe Dobler, a small boat designer from Manhattan Beach, California to requirements from Justin Pipkorn. Justin built and used the first version for several years. Joe redesigned the boat to make the planking easier and add slightly more stability. Justin built the second version of the boat and liked the improvements. Joe submitted Pepita in a 1981 Cruising World Magazine design contest and was one of four finalists. Cruising World built the boat and liked it but commented that she was a bit tender. Joe completed a third version of the boat with a wider bottom to add stability. A number of plans were sold and boats built both by amateurs and professionals. Several stretched versions were completed. A kit version designed for youth sailing was offered at one time. 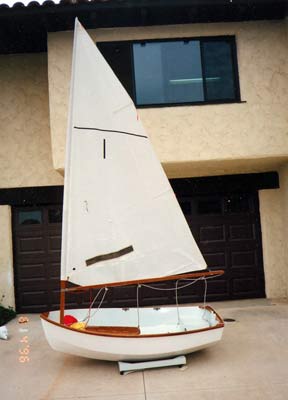 Pepita was designed as a small yacht tender which would row, tow, stow, sail and even power well. She is sized to fit on the foredeck of a 27 foot sailboat between the mast and bow cleat. She is constructed of marine plywood using the taped seam construction method. The entire structure is saturated with epoxy resin. The outer skin is 4 oz. glass cloth. The sides are 4 mm mahogany plywood, while the bottom and interior parts are 1/4 inch fir plywood. Only two sheets of plywood are required. The boat is trimmed with solid mahogany. The sheer rail is laminated mahogany and spruce. 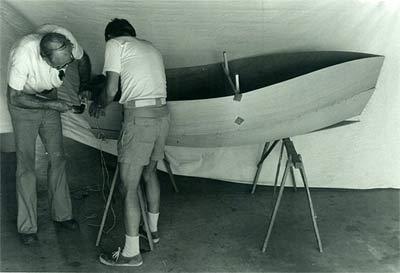 The sailing rig is the same as the Sabot dinghy with about 38 square feet of sail. All spars and oars stow inside the boat. The nearly ideal rowing position dimensions were derived from larger rowing boats. By using sturdy, maximum length oars, the boat rows extremely well for its size. Two sets of oar locks allow the rower to select the best position depending on whether one, two or three persons are occupying the boat. Although a small motor could be fitted, the boat rows so well that it would be unusual to need a motor. 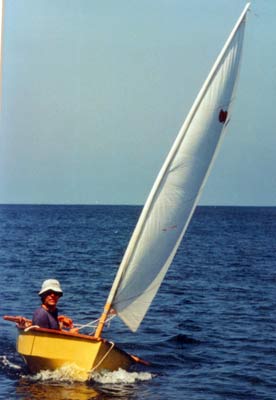 The hull shape makes the boat a good "sea boat". She handles rough conditions very well for its size. The flip side is that the boat is tender and care must be exercised when entering or exiting. The original owner insisted on enough floatation that the boat could be rowed out through small beach surf even if swamped. Once outside the surf line, the boat can be bailed and rowed out to the anchored yacht. With cooperation from a buddy, it is possible to climb into the boat after snorkeling. With these characteristics, the boat might if called upon serve as a lifeboat. 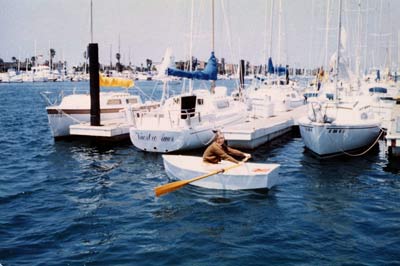 Our 1981 design competition called for an ideal tender for a cruising sailboat of no more than 35 feet in length. Ease and efficiency of rowing, towing and stowing are the three main areas of evaluation, with other considerations including weight, flotation, cost, load carrying ability, performance under power or sail, fendering and durability. 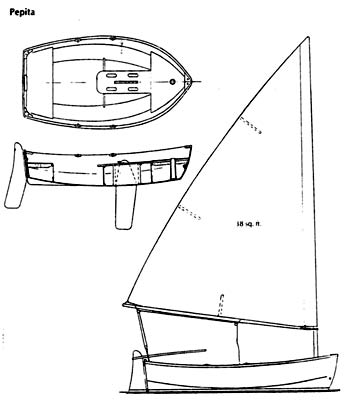 From the 20 entries received, we have selected four designs as finalists. We feel that they represent a range of poddible solutions in the quest for the "ideal dinghy." They include Pepita, a lightweight plywood model constructed with epoxy resin.

Pepita is a lightweight, 7'3" dinghy with a 3' l0â beam designed by loseph C. Dobler, 801 Eighth St., Manhattan Beach, California 90266. In the taped seam construction method used, the plywood hull panels are held together with short lengths (3" to 4") of #20 gauge copper wire inserted from the inside of the hull through pairs of holes drilled along the chines. 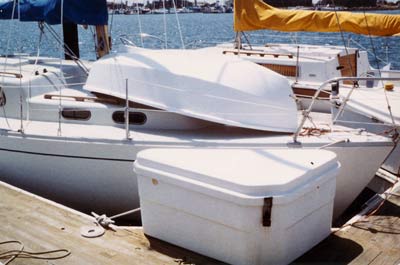 Very light weight construction is called for, with a 1/4" plywood bottom and 4mm (about 5/32") suggested for the sides and seats. Sheer stringers are pre-laminated on a curved form and then attached to the hull. 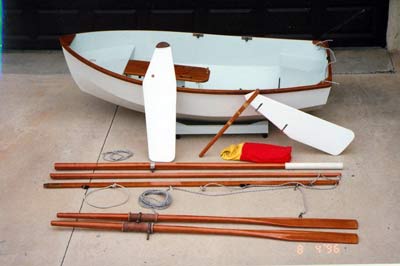 Freeboard is quite high for load carrying ability. Emergency buoyancy is provided by watertight compartments under the bow and stern seats, accessible through inspection ports. There are two rowing positions and a clever molded bow eye.

Joe designed three versions of this 7-3â dinghy. Version 2 was entered in the 1981 Cruising World Design Contest and was one of the four finalists. Cruising World built the boat and liked it but commented that it was a bit tender. Joe completed a third version of the boat with a wider bottom to add stability.

I was struck by the fine drafting in Joeâs plans. Materials and techniques have changed somewhat since the plans were drawn so it is up to the builder to research current materials and methods to complete the boat. I recommend staying with the hull shape and scantlings. Actually, the design is quite sophisticated so when in doubt, follow the design.

I took a number of photographs of the boat before I sold the it. I include some of the pictures here so a builder can get an idea about details and sail rigging. 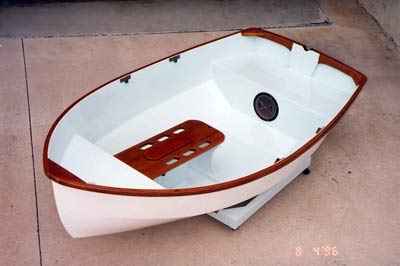 I think you will be pleased with the Pepita. I believe that this is one of those classic designs that shouldnât be lost in history. I think Joe would be pleased that you built and enjoyed one of his designs. 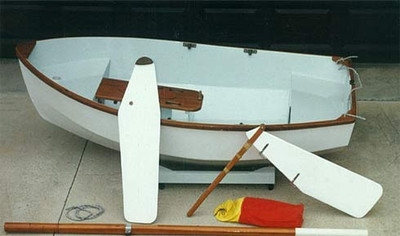