Nootka Sound is a Camping Cruiser. It was an original design for Bob Young of Lake Oswego, Oregon, but generally similar to several earlier designs. Among the requirements were: Light weight for good trailerability with normal family cars; shoal draft; good performance with sail, oars or a small outboard motor; and. good rough water performance. The main requirement, though, was cruising facilities for two people, somewhat better than backpacking, if not up to luxury yacht standards.

Camp cruising has been going on at least since John MacGregor with his Rob Roy canoes beginning in 1865. MacGregor said that the drawback of his little canoes was that progress was mainly dependant on muscular effort, that food must be had from shore, and that he could not sleep on the water. Later he had a 21 foot yawl which overcame those deficiencies but lacked the easy portability of his canoes, Modern light, trailered boats now available can provide what the canoes lacked and portability too. Provisions for sleeping aboard enable the crew to use campground facilities on long hauls that require stopping overnight. 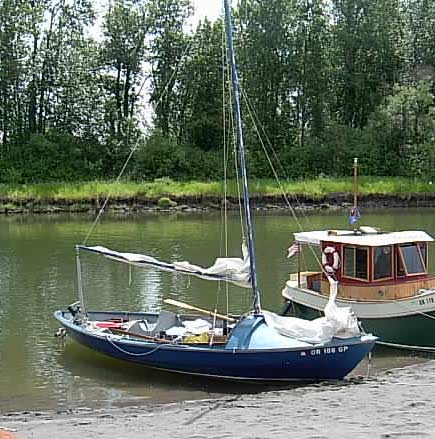 Trailerability is a key word. Here on the west Coast we sometimes drive a long way for our boating. From Los Angeles it is about 1200 miles to Port Townsend, 1100 to Yellowstone Park and 1200 to the tip of the Baja California peninsula. Such distances make one appreciate the advantages of a lightweight rig. Nootka Sound and trailer can be made to gross out at under 1000 pounds. This makes towing without special equipment possible for most of the present crop of smaller cars.

The hull form is pretty much Swampscott Dory, with a bit of whaleboat mixed in. It has the flat bottom of the dory-but the bilge sections are filled in somewhat, increasing the displacement and minimizing the "tiddly" nature of the dory. The flat bottom is a big plus for trailering.

The construction is taped seam plywood. This system makes a boat that is light but very strong. It never leaks. It is ideal for the amateur builder. Boatbuilding skills are not required, and the average amateur can do a very creditable job the first time. 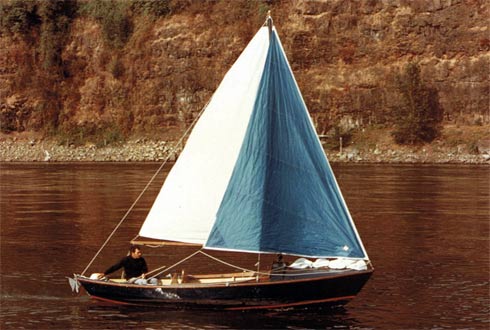 Marine grade fir plywood is used for all structure. The bottom is ½" and the-rest ¼". All joints are joined with fiberglass tape and epoxy and the exterior is sheathed with fiberglass cloth and epoxy. The benches on each side form the cockpit seats and. berths. Fixed foam flotation under them can provide stability if the boat is filled with water. The space under provides ample stowage. The board is steel plate, with the trunk offset to give better foot room. The inboard rudder swings up and can be removed by pulling a plug from its trunk. 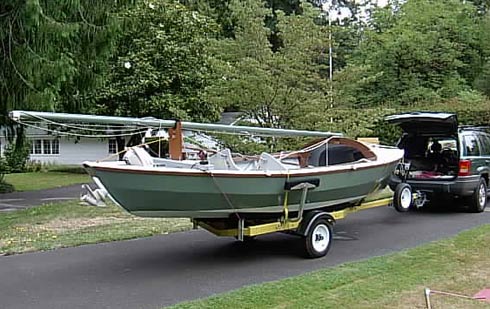 Bob's Friend Sam McKinney had been operating group canoe cruises on the west coast of Vancouver Island. He had been thinking of an escort-mother ship to go along with the canoes. When he saw the plans for Nootka Sound he decided that it was what he had been looking for. They both started building. That was in December 1973. Sam finished his boat in August 1974. Bob, who had less spare time, finished his about a year later. 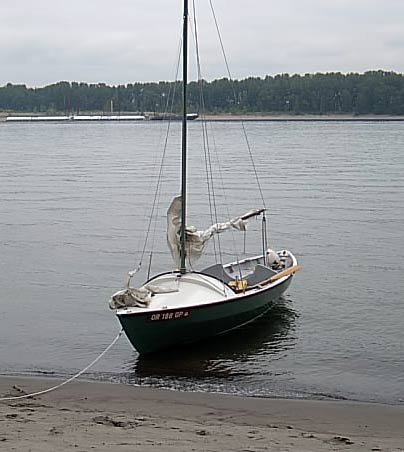 Sam did some solo cruising and Sam and Bob together cruised Kyuquot Sound, Nootka Sound and other waters of the west coast of Vancouver Island, They were well pleased with the boat's handling qualities and rough water performance.

In 1975 Sam cruised the length of the Strait of Georgia from Olympia to Desolation Sound, (a fabulous cruising area) and then back to Port Townsend, a month long cruise that covered close to 1,000 miles. 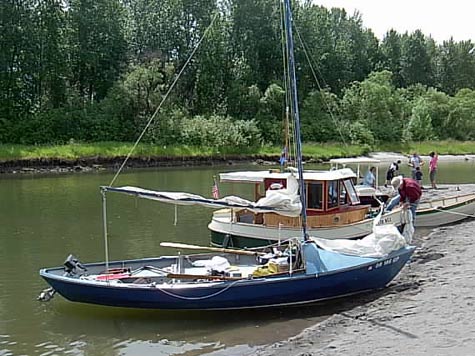 Bob finished his boat about the time of Sam's return from his long cruise. Eager for a cruise, he was about to head for the San Juan Islands and suggested that I come along. Sam generously invited me to take his boat, which was still in Port Townsend. A San Juan Island cruise had been a dream project of mine for many years. I briefly weighed duty against pleasure. Pleasure won and I accepted gladly.

Our ten day cruise from September 15 took us from Port Townsend to all the larger islands and back down Puget Sound to Olympia. We took our time and visited points of interest along the way. The weather was good, the air and water clean and the natives friendly. It was a perfect cruise. Two people cruising together in identical small boats makes an arrangement that would be hard to beat. 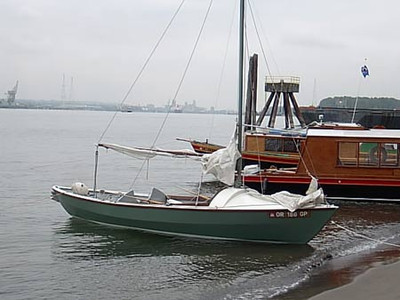