The Mini Mac is a downsized and much simplified version of traditional Mackenzie style river dories. First published in Outdoor Life magazine, hundreds have been built in various configurations from lightweight to heavy-duty, fancy to basic-utilitarian. 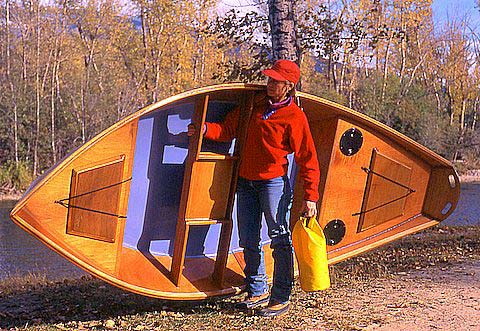 The Mini works best as a solo boat with space for extra gear but will handle two adults on flat water. Built as recommended the hull can weigh less than 90 pounds which makes it a cartopper if you don't want the hassle of a trailer, and it can also be hauled in the back of a pick-up truck. A lightweight boat allows increased payload, but the real advantage comes in getting the boat on and off the water and in and out of storage. The tough, slick graphite bottom also allows dragging the lightweight hull over parking lots, gravel and sand beaches and logs. 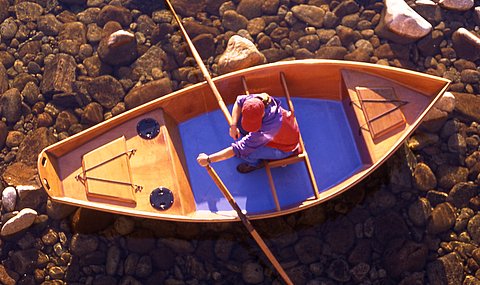 Plywood/epoxy construction produces a lightweight low-maintenance hull that will not watersoak like traditional wood boats and makes modification and repair a simple matter, and the technique is well suited to amateur and first-time builders.

The detailed building plans include a discussion of many options, sketches, material sources, builders tips and patterns.

Hi Paul, finished the Mini Mac and now using it. A pretty easy build and I kept it as simple as possible. Fibreglassed sides and graphite epoxy on the bottom. Eight foot oars seem to work well. Might have a crack at a Maxi next. Can you tell me how much rocker is in the Max boat and what is width at floor? 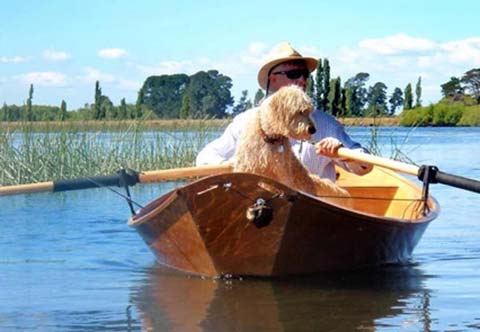 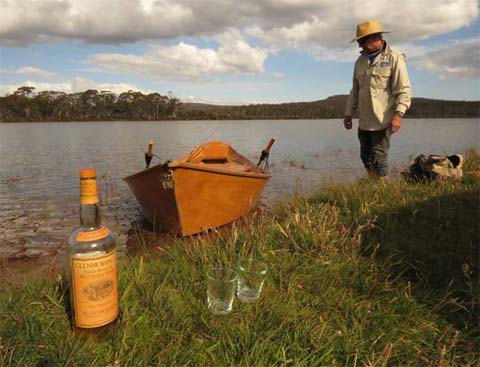 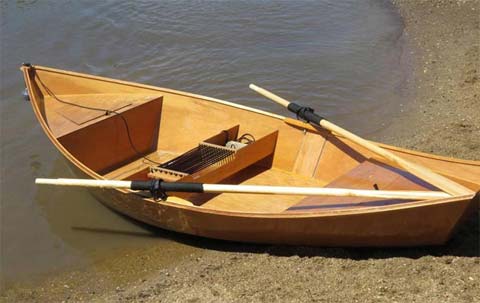 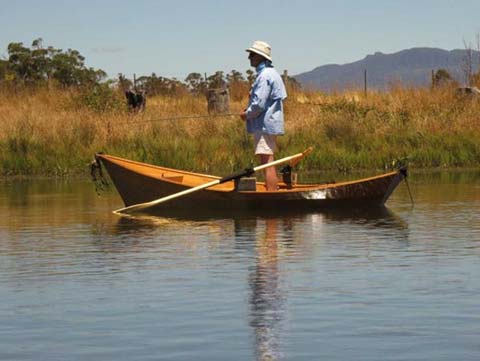 Just a few words to thank you for a great boat plan. The finished boat is all we hoped for and more! We probably overbuilt it in some ways but thats just my nature as a contractor. We used 6 oz cloth on the topsides, which I also made about 2" taller than the plan. I put three layers of tape on the chine joints, doubled the transom and 3 coats of graphite on the bottom. I'm just starting to work out the anchoring system.

Paul....I decided to use Okoume marine plywood from Canada and West System epoxy for my Mini. I think it took me about 30-40 hours to make it. Being the first boat and first time working with epoxy is why it took so long. I made the sides a couple of inches higher and reinforced the transom to make it sturdy for a motor and its still a very light boat. This was several years back and now that I've retired it will get more use. Because I sold my truck that I kept at our cabin in northern Wisconsin I plan to use the johnboat as a car topper and it'll work great for getting in and out of the spring ponds we fish up there for trout.

I get a lot of compliments on the mini mac and its become kind of an heirloom within the family. It's been stored hanging from the garage ceiling. 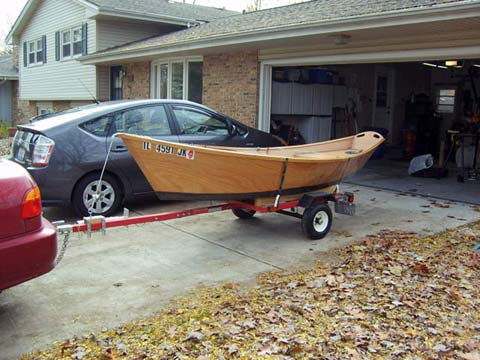 Paul....Over the last several years I have enjoyed the Mini-Mac that I built using your plans. I have previously built a traditional constructed drift boat and it was stable in the water, but it was far too heavy to move by myself. It was at least a two person operation just to launch. I would now be very interested in a slightly larger version of the Mini and purchasing a set of those plans if you have them. I understand you are working on a slightly larger version.

I know that you also have other projects for cabins and I would be interested in other outdoor projects.

Just about finished with my Mini. She's built like a...Well, she's built very strong. 10 coats of epoxy and 4 layer of fiberglass cloth on the bottom. 3-4 coats of varnish all around. 40 hours to build and 20 to sand. Now I know why Pop Eye looks like he does.

I put 4 ribs in the boat to strengthen the bottom. The white wood is Maple. The transom is made of 1/2" oak plywood. I inlayed some Cherry in the gunwales ... just for looks. It was one of the most fun projects I've ever done.

Thanks for your advice. 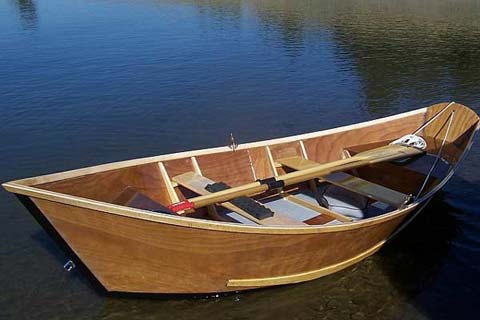 several years back we purchased several sets of Mini-Mac plans and spent some cold winter nights having a blast building a small fleet. The enclosed picture of our six Mini-Macs is our building group (The Six Pack Boat Company) and the end result of our labor. You never would have thought that a bunch of silly old fisherman could have so much fun! The boats get compliments where ever they are seen, and we are all very, very proud of our final product. Alas, as we grow older even these lightweight boats can be a struggle to drag in and out of our prime fishing lake. The downhill isn't bad, but getting them back up the hill after a weekend of hard fishing is something I'm struggling with. 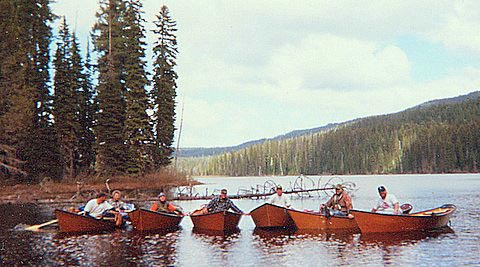