SKU:
DN-LUTRALAKER
Availability:
Printed plans will be mailed by the designer
Measurement:
Imperial 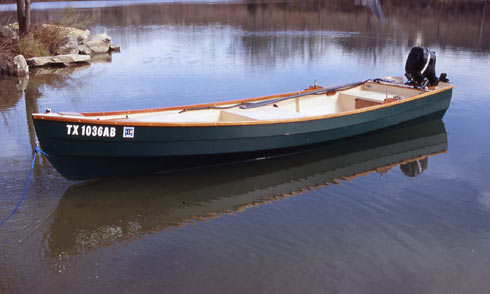 Plans for both boats include four large sheets of drawings, David's Boat Building DVD, and a supplemental manual with photos and instructions. Click HERE for a sample of that manual.

Introducing the Lutra Laker. As her name would suggest the design was influenced by the big cargo canoes from the Grand Lakes region. Basically I took Flyfisher, stretched her to 17' 6", increased the beam to 48" and put a transom on her. The bottom at the mid point is 36" wide and at the transom it is 33". Of course, the freeboard was increased as well. She is stable to about 80 degrees before she wants to capsize. 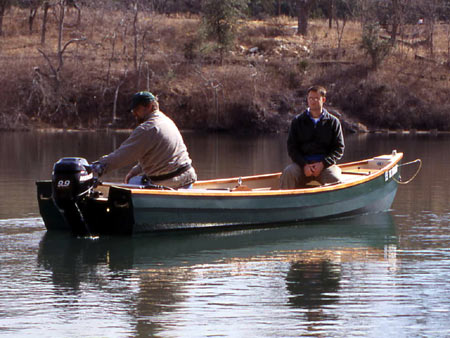 With two people, nearly 400 pounds in the photo, she draws approximately 3-1/2" to the bottom of her skegs. It takes 120 pounds to push her down an inch. Loaded as in the photo, a 9.9 four stroke pushes her at 18.5 mph (wide open throttle), as measured by a hand held GPS. If I re-proped her I could squeeze out 21 or 22 mph but I don't feel it is worth the expense. At 18.5 mph she is steady and true and at ¾ throttle I'm able to make hard over turns with Laker being very stable, no skipping, and no unexpected behavior (I have no reason to believe this wouldn't be true at WOT but I have not done that yet and probably will not, as this seems like poor seamanship). 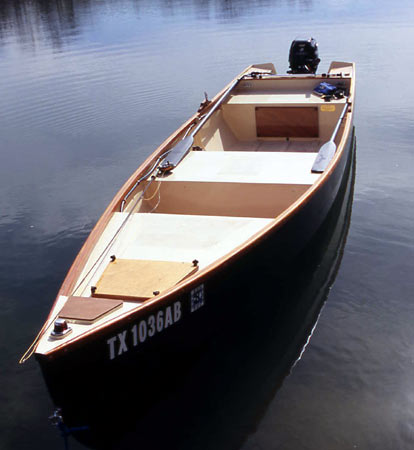 On her maiden voyage we took her to the Texas coast (Corpus Christi area) and she proved to be an excellent flats boat. Her very shallow draft (almost that of Flyfisher) and light weight, approximately 130 pounds without the motor, make her a dream to pole across the flats. Even in water less than 3" she rides on her skegs and I was able to slide Laker across mud and sand without having to step out of the boat.

Texas bays are wide and shallow, most of the bays will have a majority of the water 2' and under, with 4' and 5' considered deep. This means any chop is steep and close, which makes for a rough ride. The days we were there the wind blew 10 to 15 and one day the wind was calm to light. Laker handled the chop from 10 to 15 winds very well and without excessive pounding. Given her flat bottom I was surprised how little she did pound, probably no more than the flats boats with just a small amount of deadrise. When we slowed down she took it all in stride. 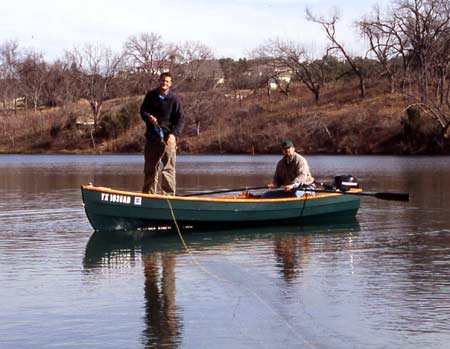 The winds were calm to light the morning we took Laker to the pass at Port Aransas. This is the main ship channel for Corpus and the pass has jetties about two miles long, that is the mouth of the pass is about two miles into the Gulf of Mexico. In the pass itself there was about a 3' to 4' swell on about a 10 second interval... not rough or scary but not flat either. This swell, mixed with the wakes from the large sportfishers, made a good test for Laker. At no time was I uncomfortable or uneasy, even at the mouth of the pass. We even killed the engine and drifted along with the ebb tide, casting towards the rock jetty for speckled trout and redfish. Again Laker performed well. She never took any water into her splash well even when the light winds caused us to drifted stern first. All in all, I couldn't have been more pleased with Laker's performance in the pass, especially as she is really just a large canoe. 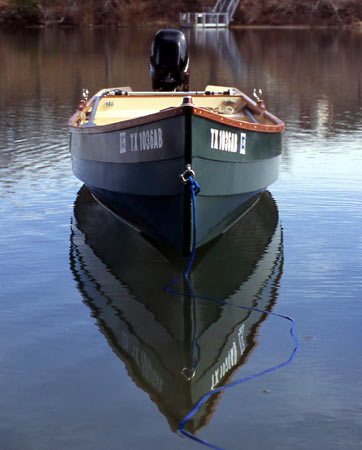 One of the reasons I always felt comfortable in the pass is Laker has about 20 cubic feet of watertight storage/flotation, more than enough to float her with a great deal of water on board. But the storage/flotation is there for more than just piece of mind. I have always been fascinated with the Gunkholing columns of Dave Getchell, Sr. in the old Small Boat Journals. I felt that 20 cubic feet of storage would allow for more than ample camping gear for two people to be stowed and never have anything but rods and tackle out. 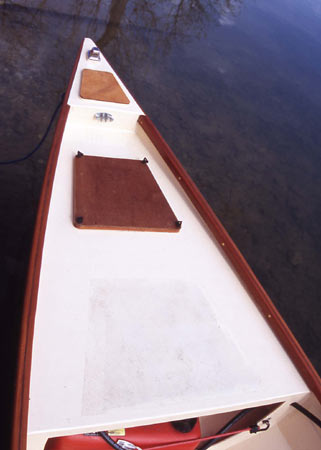 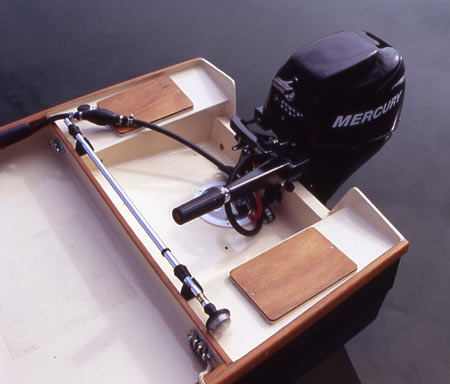 The two 7X10 plates next to the splash well allow access to small batteries for the running lights on the starboard side and on the other side for a fish finder. The sealed, small batteries help keep Laker's weight down to a minimum.

Even though the splash well added to Laker's overall weight I felt it was necessary because it made the boat safer and better able to handle rough water. 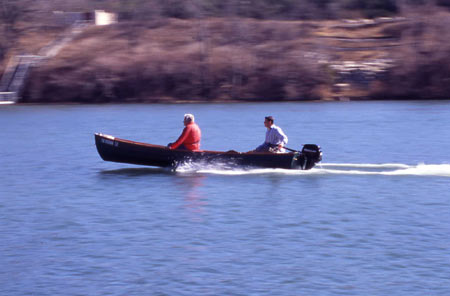 Laker's light weight and flat bottom were also important for a gunkholing and camping boat. In Minnesota's BWCA some of the areas have what are called "push over portages". Wheels are placed under the boat and it's pushed over land to the next lake. Having a light weight boat opened these areas to us. The light weight and flat bottom also gave us the option of being able to launch the boat where there are no ramps. We can slide the boat off the trailer on to the wheels and then into the water. 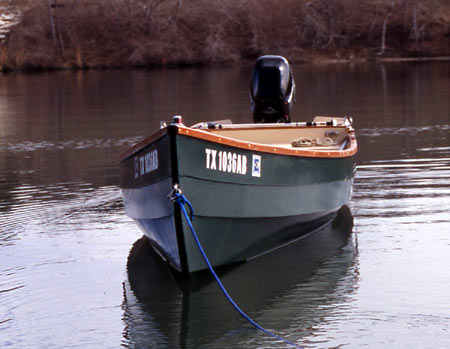 I also wanted a boat that would be at the upper end of the car toppable range but at 130 pounds, maybe at little less, I think realistically, Laker falls at the upper, upper end of car topping. Certainly two young, strong individuals could do it but this boat and her owner will be much happier with Laker on a trailer.

I have designed a 14'6", 42" beam, 80 pound, smaller version of Laker that is completely car toppable. It takes a 5HP outboard. The 5HP motor should give 12 to 15 mph easily. As this boat is just a scaled down version of Laker I every reason to believe it will give the same great performance.

There are plans for both boats and I will have kits available in the near future. 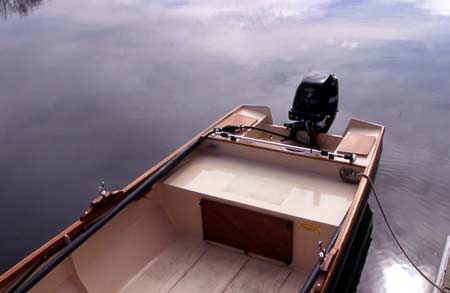 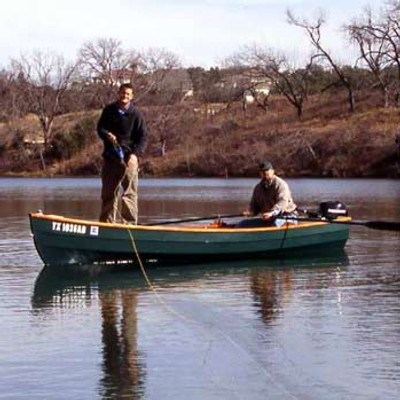