A while back, I met Tom Setum at the Scuzbums Giant Five Day Messabout in San Diego. Tom is the son-in-law of Joe Dobler. Joe is gone now, but was a pioneer of the stitch and glue technique of boat construction. He made his living as an engineer but his passion was small boat design. Tom was selling some of Joe's plans (he had inherited all Joe's original work) informally and when I suggested we make them available at Duckworks, he was interested. Since then, we have made 5 plans available. Lissa is the sixth and the first one that I have sailed personally. Here is what Joe had to say about #234:

This is a multi-purpose boat. It rows very easily, and is fast under sail. It is light enough to cartop. The construction is taped-seam plywood sheathed with fiberglass cloth and epoxy. All parts are detailed so that they may be made on the bench before assembly. No strongback or jig is required. It has been built by several first time builders with admirable results.

The sliding gunter rig has spars that are all under ten feet long for convenient stowage. The after thwart is removable for sailing, when it would only be in the way. Sitting on the floorboards on a PF cushion is more comfortable. A deckbox-seat is provided and may be located for rowing either single or double and makes a good place to store loose small gear.

Joe's dry description really understates this boat. The reality is this little skiff is a wonder of clever design. From the clever centerboard to the removeable floorboards to the simple, freestanding gunter rig, you can tell that a lot of thought went into this boat. My son, Joe and I sailed her all over San Diego Bay and I can tell you that this is as handy a boat as you could ask for. She is a great daysailer and I would not think twice about taking this little boat cruising in sheltered water. She has plenty of room a couple and some camping gear to get away for days. A solo sailor could venture on even longer trips. 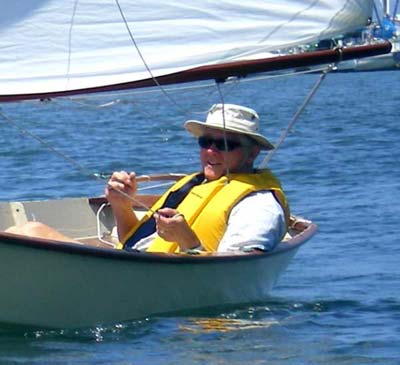 Tom relaxes at the helm of Lissa, Joe Dobler's design #234

Here is part of an article that Tom Setum provided about Lissa- it was written when stitch and glue was new, but it still gives a good overview of the boat:

California naval architect Joe Dobler's 15'-2' lightweight pulling boat is constructed of 4mm (about 1/6") plywood over widely spaced 3/8" ply web frames. The hull is essentially bonded together, rather than fastened.

The construction method is glued seam, with epoxy/fabric tape reinforcement. Wire ties are used to hold hull panels together during initial assembly, then the seams are filleted with epoxy putty and covered with glass tape. The wire ties are clipped off when the seam has cured. There are no actual chine logs, and the wire ties are not proper fastenings, but used merely to hold the plank panels together during the gluing process. 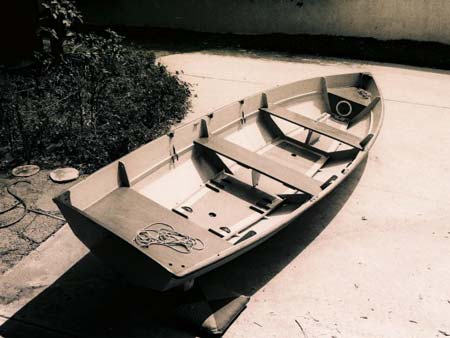 The construction method is glued seam, with epoxy/fabric tape reinforcement. Wire ties are used to hold hull panels together during initial assembly, then the seams are filleted with epoxy putty and covered with glass tape.

Framing has been reduced to four frames and bulkheads on about 45" centers. There are, in addition, eight small floor timbers. The gunwale has been eliminated, and a formed two-piece laminated spruce and mahogany outwale forms the only longitudinal sheer reinforcement. There is no stem-piece; the topsides and bottom come together into a filleted, taped seam, just like the chines. The normal seat riser, found inboard of the frames on the other two skiffs, is now a planking stringer laminated directly to the topsides and running outboard of the frames.

Despite the apparent simplicity of the building method, Mr. Dobler's skiff is as complex a structure to build as a traditional craft. (Yes, but far fewer skills are needed to produce a strong, functional boat with this method - Chuck) This is largely the result of increased interior and rigging complexity. The Dobler boat employs bulkheaded flotation chambers, and a false floor to protect the hull bottom. There are a total of about 95 separate pieces of wood to be shaped and assembled in the hull. 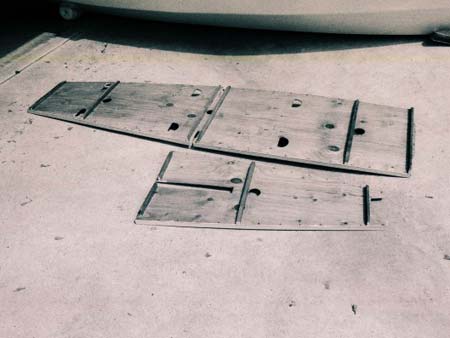 The Dobler boat employs bulkheaded flotation chambers, and a false floor to protect the hull bottom.

While some traditional boatbuilding skills like scarfing, spiling, and lofting have been mostly eliminated in the Dobler boat, new skills like wire tying, laminating, filleting, FRP bonding, and extensive measured layout of parts take their pIaces. Other skills like bevel fitting and fairing are still as important to the completion of the boat as they ever were. It is more a matter of individual preference and experience whether such a construction method is actually "easier." I prefer to think of the design choices as having been made on the basis of producing a light structure, rather than an easier boat to build.

The elimination of members like solid timber frames, chine logs, stempiece, and keel prevents the designer from being able to use fasteners to hold the thin plywood components together. On the other hand, it allows him to reduce weight to a minimum.

The skiff tips the scales at about 120 pounds, roughly half that of an equivalent traditionally constructed boat. There are a number of factors that allow this light weight. 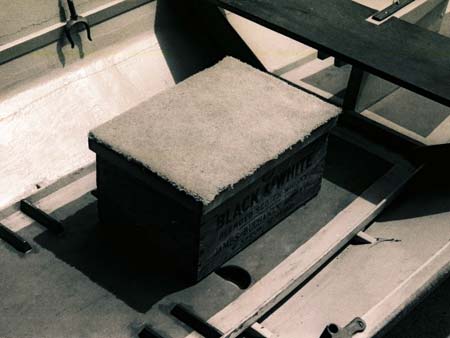 A deckbox-seat is provided and may be located for rowing either single or double and makes a good place to store loose small gear.

First of all, the plywood planking is much stronger across the grain than is ordinary timber. As a result, excess thickness does not have to be designed into the planking to prevent it from splitting. The planking on this skiff is about one third the thickness (and weight) of an equivalent timber-planked boat.

Second, the amount of material in the hull's framing has been cut drastically-perhaps by half. This is made possible by the fact that heavy scantlings are not required as a base for fastenings, and because a seamless hull can be made more flexible than one that is not. Flexing will not cause seams to open where there are none.

Third, the reduction in hull weight itself allows the designer to employ lighter planking and framing. It also allows use of a smaller sail, resulting in less hull stress. The scantlings suitable for a 120-pound sailing skiff carrying 60 square feet of canvas are quite simply not strong enough for a 350-pounder with 100 square feet of sail. 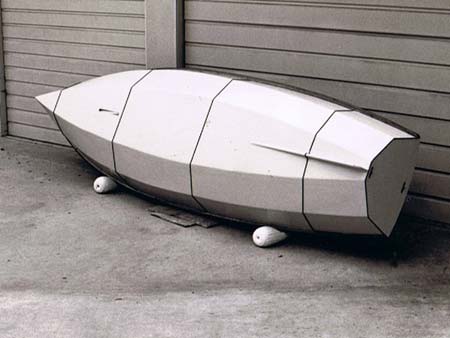 The plywood planking is much stronger across the grain than is ordinary timber. As a result, excess thickness does not have to be designed into the planking to prevent it from splitting.

Finally, the purpose for which the Dobler skiff was designed is not the same as that of a more traditional boat. It is a lightly built boat intended to be moored in a garage, or at least on land, inverted and dry. And the scantlings reflect that intended care.

It is not suitable for year-round soaking at dockside, the interior alternately filling, drying, and weathering in rain and sun. There is only so much wear and tear 1/6" of plywood can take. Despite the system of floorboards shown on the plans, this skiff is clearly not the kind an oysterman will want riding beneath his boots. But then, that is not the point of the design.

The Dobler skiff is in fact a boat for people who don't live on the water at all. It is light enough to be a manageable load for a couple of people to carry a short distance or to load on top of the family car. It is not made leaky by drying out in the backyard, or riding at 55 miles an hour down the Interstate on a roof rack. 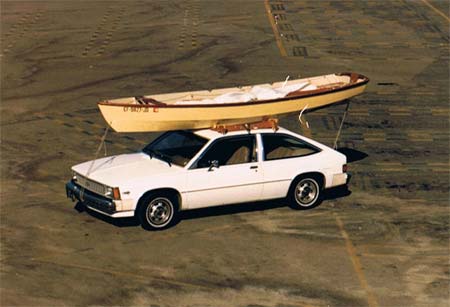 The Dobler skiff is light enough to be a manageable load for a couple of people to carry a short distance or to load on top of the family car.

With proper care, and an understanding that this is not a boat that can withstand continual weathering or abrasion, it too might be expected to give 20 years of use.

The Dobler skiff, with its modern materials and lightweight construction, will appeal to those who must transport their boat to reach the water.

Lissa plans come with 21 detailed drawings of various sizes including one with full size layout of the bulkheads. There is also a booklet with dozens of instruction sheets that Joe Dobler calls "General Specifications" - They cover topics such as "Taped Seam Construction", "Centerboard Trunk Construction", "Scarfing", "Internal Bow Eye", "Gunter Rig Spar-rigging Details", "Sheathed Rudders & Centerboards" and many more - everything you need to build this boat.

We put our newLissa in the water for a quick trial before leaving for our summer cruise in Michigan. The boat floated on her lines. Weight was 130 pounds. The boat seems to row effortlessly as I remembered the original that Joe built. You will notice that the interior looks more like the Pepita than the Lissa plans. 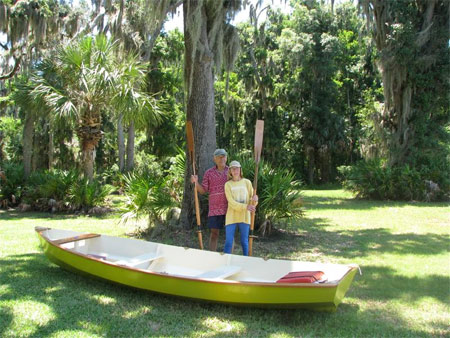 I thought you might want a few pictures for your plan section. We'll make a few mods and complete the sail rig when we get back home. 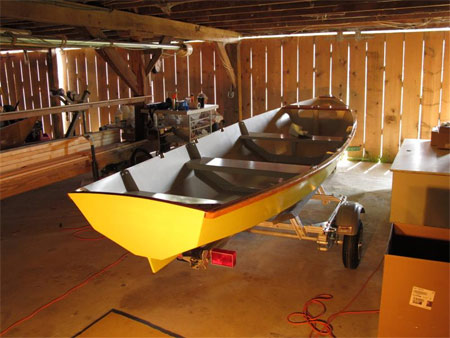 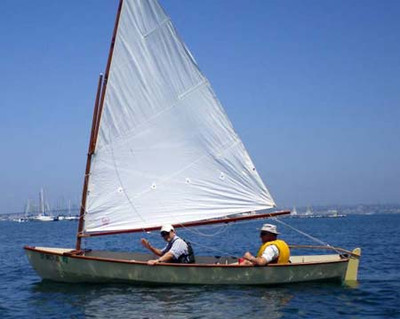